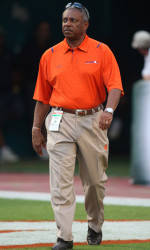 McCorvey to be Inducted into Atmore, AL Hall of Fame

CLEMSON, SC – Clemson Associate Athletic Director for Football Operations Woody McCorvey has been selected for the Atmore, AL Area Hall of Fame. McCorvey is in his ninth year at Clemson, his second year as an associate athletic director under Head Football Coach Dabo Swinney.

McCorvey has strong ties to the state of Alabama. Born in Grove Hill, AL on September 30, 1950, McCorvey graduated from Escambia County Training School in 1968 where he lettered in football and basketball. He then earned four varsity letters playing quarterback for Alabama State University.

He came to Clemson in 1983 and helped the Tigers to a 60-19-3 record over eight seasons. Clemson posted a 10-2 record in each of his last three seasons and won bowl games each season. Clemson won the ACC championship in 1986-87-88 during his first tenure with the Tigers.

McCorvey is married to Ann Brown McCorvey and they have one son, Marlon, who was born in 1970.