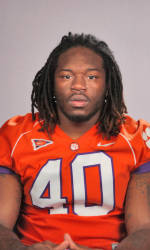 Clemson, SC — Clemson red-shirt freshman linebacker Brandon Maye has been named to the first-team Freshman All-America team by the Football Writers of America. Maye had 87 tackles this year in the 12 games he played, all as a starter, and he led all ACC freshmen in tackles this past season.

Maye’s tackle total was the most by a Clemson freshman since Anthony Simmons had 150 in 1995.

The native of Mobile, AL played 545 snaps in the 12 games and had five tackles for loss, two sacks and nine quarterback pressures. He also contributed three fumble recoveries to rank in the top 10 in the nation in that category. It was also a Clemson freshman record for fumble recoveries.

Earlier, Maye was named a second-team Freshman All-American by College Football News, Rivals.com and The Sporting News, and was a third team selection by Phil Steele.

Maye was one of two Clemson freshmen named first-team freshman All-American by various services this year. Mason Cloy was a first-team selection by College Football News.