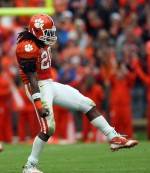 CLEMSON, SC – Clemson linebacker Brandon Maye has been named to the ESPN The Magazine Academic All-District III football team. Maye will now be on the ballot for the Academic All-America team that will be voted on later this month.

The native of Mobile, AL is in his second season as a starter. Last year he had 87 tackles for the year, helping the Tigers to a top 15 national ranking in scoring defense an total defense.

Maye has a 3.36 career GPA in sociology. He is the first Clemson linebacker to make an Academic All-District team since Chad Carson in 2001.