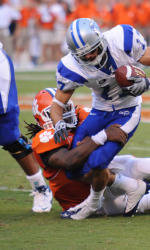 Maye and Spiller Earn ACC Player of the Week Honors

GREENSBORO, NC – Miami sophomore quarterback Jacory Harris headlines a list of six players selected as Atlantic Coast Conference football players of the week at their respective positions, announced Tuesday by the ACC, after throwing for a career-high 386 yards and two touchdowns on 21-of-34 passing in Miami’s 38-34 upset of No. 18 Florida State in Tallahassee.

Harris is joined by Hurricane teammate Brandon Harris, the defensive back selection. Clemson also appeared on the list twice as senior running back Brandon Maye were selected as a specialist and defensive lineman, respectively. The group is joined by North Carolina’s Alan Pelc (offensive lineman) and Virginia Tech’s Ryan Williams (rookie).

DEFENSIVE LINEMAN – Brandon Maye, Clemson, LB, So., 6-2, 230, Mobile, Ala. (Davidson) Maye tallied a game-high 13 tackles, including five solo stops, in the Tigers’ 37-14 win against Middle Tennessee. He also had one tackle for a loss of 14 yards, forced a fumble, and hauled in his first career interception. Maye anchored a Tiger defense that allowed just seven points and forced three turnovers. Normally wearing number 20, he donned number 17 for this game in honor of teammate Stanley Hunter, who has given up football due to epilepsy.

SPECIALIST – C.J. Spiller, Clemson, RB/KR, Sr., 5-11, 195, Lake Butler, Fla. (Union County) Spiller made the most of his first touch of the 2009 season by returning the opening kickoff 96 yards for a touchdown, an ACC-record fourth kick return of his career, against Middle Tennessee. Spiller added two punt returns for a total of 63 yards, including a career-long 50-yarder that led to another Tiger score. All this was done in the first half, as the Heisman candidate sat out the second half.

OFFENSIVE BACK – Jacory Harris, Miami, QB, So., 6-4, 190, Miami, Fla. (Northwestern) Harris threw for a career-high 386 yards and completed 21-of-34 passes for two touchdowns and ran for another score in leading Miami to a 38-34 upset win at No. 18 Florida State. Making his first career start against the Seminoles and third overall, Harris’ 386 yards were the most by a Miami quarterback in the storied rivalry between the in-state foes and the 10th-highest single-game total in school history. Harris capped the night by leading Miami on a six-play and 59-yard scoring drive for the eventual game-winning touchdown.

OFFENSIVE LINEMAN – Alan Pelc, North Carolina, G, Jr., 6-6, 325, Houston, Texas (Pearland) North Carolina junior offensive guard Alan Pelc graded out at 90 percent and had seven knockdown blocks in No. 21 North Carolina’s 40-6 win over The Citadel. Pelc anchored an offensive line that led the Tar Heels to 261 rushing yards, the first time they have broken the 200-yard mark since 2006 and the most since a 285-yard outburst against Duke in 2004. UNC had three players rush for at least 40 yards (Shaun Draughn 118, Ryan Houston 45, Jamal Womble 41) on the ground behind the Pelc-led offensive line.

DEFENSIVE BACK – Brandon Harris, Miami, DB, So., 5-11, 195, Miami, Fla. (Booker T. Washington) Miami sophomore defensive back Brandon Harris had a game- and career-high nine tackles (three solo) and broke up two passes against Florida State. Clinging to a 38-34 lead with Florida State on the Miami two-yard line with nine seconds remaining, Harris defended a Christian Ponder pass to help seal the win for the Hurricanes.

ROOKIE – Ryan Williams, Virginia Tech, RB, Fr., 5-9, 205, Manassas, Va. (Stonewall Jackson) Freshman running back Ryan Williams totaled 113 all-purpose yards in his collegiate debut as he rushed for a team-high 71 yards and two touchdowns, including a 32-yard scamper down the sideline for a score in Virginia Tech’s 34-24 loss to No. 5 Alabama. He also caught two passes for a team-high 42 yards.