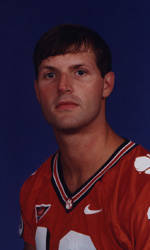 Matt Schell came to Clemson in the fall of 1998 to play football for four years and earn a degree in marketing. After this season he will have accomplished both of those feats, by his hard work and the support of his family. Schell grew up in Covington, GA playing sports most his life. His father, Ricky, got his son involved in football at a young age.

“My dad took me to the recreation department when I was nine and that is how I got started. I was a tight end the first two years. I did not enjoy football as much as baseball, so I just played baseball most of my youth,” said Schell.

In the eighth grade he tried out for his middle school football team. He started playing quarterback and fell in love with the position and the game. Schell attended Eastside High School in Georgia. It was a brand new school and his class was the first to graduate from the school. During his junior year of high school, the football team played its first varsity schedule. “It was a struggle not having any seniors on the team my junior year, but my senior year we returned 22 players and had a 9-6 season.”

In high school, he played both football and baseball. “I had to choose one my senior year, I was probably better at baseball and had a more realistic future with the sport, but I loved football. After talking with my parents, we decided I should work hard at football and see where I could go,” recalled Schell. His hard work paid off, as Clemson, Georgia, Georgia Tech, N.C. State, Marshall, Georgia State and Appalachian State, recruited him his senior year of high school.

Upon arriving to Clemson, he began his college career with the desire to excel in the classroom and on the football team. He was been awarded multiple times for his endeavors in the classroom. Schell has been a member of the ACC Academic Honor Roll each of his three years at Clemson, honored as one of Clemson’s top scholar-athletes at the Peach Bowl Awards luncheon in 1999, and won the Vickery Hall Award for the top grade point average for a sophomore football player.

“Academics are first, I will always have my degree. Athletics, unfortunately, have to end some day,” he said. Schell plans to pursue a career in law and has begun the application process to the University of South Carolina’s Law School. It will be strange feeling for a Clemson quarterback living in Columbia for three years, but he is sure he will meet some great Tiger fans. “I hope to make it up back to Clemson every weekend and watch the Tigers play in Death Valley.”

A variety of coaches have helped Schell become the student-athlete he is today. Former Head Coach Tommy West and Steve Ensminger recruited him out of high school. He was very close to Coach Ensminger, who was the offensive coordinator and quarterbacks coach.

“It was tough seeing the coaches that recruited you step-down,” Schell said. But he feels blessed to have the experience of adjusting to different coaching staffs and their styles. He and assistant coach Mike O’Cain, a former Clemson quarterback himself, have an excellent relationship. “Coach O’Cain has many qualities that make him a good coach. He encourages, compliments and corrects.”

The back-up quarterback is an important position on every football team. He is required to know what is happening during the game and his playing time is never guaranteed. Matt Schell feels that his role on the Clemson football team is more than that. He tries to be, “a great leader to the younger guys on the team by encouraging them and helping them out.

He has a close relationship with the other quarterbacks on the team. He has played with two of Clemson’s greatest quarterbacks, Brandon Streeter and Heisman Trophy candidate Woodrow Dantzler. “I like the support role that I have grown into on the team. I play with some great football players and I enjoy supporting them.”

Schell has earned the respect of the other players on the team. They have seen in practice and in spring scrimmages that Schell knows the game of football. If there is an injury to Dantzler or to second-string quarterback Willie Simmons, the squad has confidence in Schell’s abilities. Just look at his performance in the last two spring games where he has completed 18 of 32 passes for 330 yards. His spring game stats have been the most impressive on the team the last two years.

His reputation as a leader is also shown in his selection to LIFE Line, Clemson’s football leadership organization. “It was a great honor to be picked as a leader of the football team. LIFE line is full of great people, not just great athletes,” he said. The professional manner, in which the meetings are held, will help guide Schell in his future business endeavors.

Schell’s leadership skills also can be traced to the leadership of his parents, Ricky and Julianne Schell. His parents have not missed a Clemson game in four years. Schell has always looked up to his father. “He gave me the dream of playing football and he has been there cheering me on since I was young.”

His mother, Julianne, is also a strong positive force in his life. He is amazed by her ability to provide for his sisters and him without complaining. Schell adds, “I do not think that I have ever heard my mother complain about anything, she would do anything for my sisters or for me.”

After graduation, Schell hopes that he will be able to remember all the good times he has enjoyed here at Clemson. Playing football here has taught him a lot of things about himself and what he wants for the future.

“I wish everyone could experience Clemson,” Schell said. “There is something in these hills, and if you are a Tiger you know what I am talking about. I have learned the value of hard work, how to set goals and how to reach them. Most importantly, I have met many, many great people, and I will take their friendships with me wherever God leads me.”

Marsha Byers is a senior from Pickens, SC and works in the Clemson Sports Information Office.