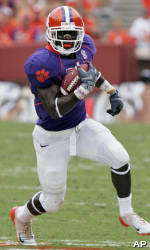 CLEMSON, S.C. (AP) – Thoroughly dominated for a half, Maryland needed a special play to steal momentum from No. 20 Clemson.

Who else to call on than perhaps the Terps’ most special player, Darrius Heyward-Bey.

With Maryland (4-1, 1-0 Atlantic Coast Conference) down 17-6, the former high-school track star took off on a 76-yard reverse that set up the first of two second-half TDs in a 20-17 win Saturday.

On 1st-and-10 from Maryland’s 20, Heyward-Bey ran around an open right side, cutting back through the middle of the field to the left sideline. By the time he was forced out by Clemson safety Michael Hamlin, Heyward-Bey was on the Tigers 4.

“I wanted to score, but I put my team in position to score,” he said.

Two plays later, Chris Turner found Torrey Smith on a 6-yard touchdown pass to close the gap and fire up his teammates.

Da’Rel Scott had the winning score, a 1-yard run, early in the fourth quarter. But there was no minimizing the lift the Terps got from Heyward-Bey’s run, the longest allowed by Clemson (3-2, 1-1) in eight years.

“It made us feel like we could win this game,” Heyward-Bey said. “We knew if we could break one big play, things would start rolling for us.”

And roll the Terps did.

A defense that gave up 193 yards and two touchdowns in the first half to Clemson runners James Davis and C.J. Spiller, shut down those holes after halftime.

An offense that collected just 93 yards at the break, executed when it mattered as Turner found Danny Oquendo with passes of 11, 11 and 21 yards on the go-ahead series.

The loss ended Clemson’s three-game winning streak and brought back the scars of its opening-week loss to Alabama.

The fading ACC favorites have 12 days before their next test, a road game against one of the league’s new leaders, Wake Forest.

“Ten days of hearing how terrible we are and how we can’t win,” Spiller said. “But we’ll come together.”

It likely won’t be easy after this one, the Tigers’ second straight stunning Death Valley defeat to the Terps, a double-digit underdog coming in.

Davis had a 38-yard TD run and Spiller a 35-yarder to build the lead. Clemson’s defense also looked strong, limiting Scott to just 19 yards in the opening period.

But coach Ralph Friedgen has regularly vexed the Tigers, be it two stints as Georgia Tech offensive coordinator or the past eight seasons leading Maryland.

In 2006, a suspect Maryland defense held the powerhouse Tigers to four field goals in a 13-12 win that ultimately knocked Clemson from the ACC title chase.

This time, no Tigers defender got anywhere near Heyward-Bey on his long run until he closed in on the goal line.

Maryland’s defense, porous early on, didn’t give up a point in the second half, forcing four punts and the crunching fourth-down stop on quarterback Cullen Harper with 5:36 remaining.

Davis and Spiller, the vaunted “Thunder and Lightning,” got just 31 yards between them the final two quarters.

Maryland didn’t give the ball back, finishing off its fourth straight victory over a ranked team. It was also the Terps’ third win in their past four visits to Death Valley.

“We won this one with our hearts, not with our ability or our technique,” Friedgen said.

The Terps were outgained by Clemson 295 to 372, with Scott finishing with 39 yards.

Maryland might’ve been down even more if not for Clemson’s first-half errors.

Aaron Kelly was knocked down and recovered by the Terps’ Adrian Moten.

Spiller had a 59-yard TD run in the third quarter called back on Kelly’s hold.

Harper also threw his fifth interception of the season, one shy of the six he had all last year.

“We self-imploded today,” Clemson coach Tommy Bowden said. “We didn’t play sharp today and that was the reason we lost.”