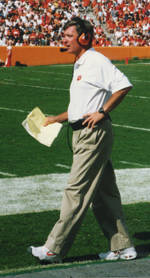 Clemson, SC – Red-shirt sophomore Marcus Houskin, who made his first career start at free safety last Saturday against Wofford, has been lost for the season due to a broken neck. The break was detected during X-rays on Monday. The injury was suffered during the second quarter of Clemson’s 38-14 win over Wofford on Saturday at Death Valley.

“This is certainly a big loss, Marcus was really improving and had moved into the starting lineup,” said Head Coach Tommy Bowden. “We are thankful that he does not have any paralysis or neurological damage and should make a full recovery.

“I have been lucky in the past in that we hadn’t had many players lost for the season. But, this is the third player we have lost since the beginning of practice and all three are starters and key players.”

Dr. Byron Harder, Clemson team physician, said Houskin will have surgery Wednesday to fuse his vertebra at Oconee Memorial Hospital. He will be in a brace and will miss the rest of the season.

Houskin, a native of Douglasville, GA, had played in both games so far this season, the first as a reserve and the second as a starter, and had nine tackles, including six first hits. He had 16 tackles in 12 games last year as a reserve safety.

Bowden said that Eric Meekins, who started the first game at free safety against Central Florida, will move back to the starting lineup against Duke. Freshman Travis Pugh, a first-year freshman from Manning, SC, will move into the backup role behind Meekins. Pugh did not play in the first two games of the season.

During the preseason, Clemson lost starting linebacker Altroy Bodrick to a torn ACL and sophomore wide receiver Kevin Youngblood to a broken leg. Bodrick is definitely out for the season and will come back in 2002 as a red-shirt senior. Youngblood’s status will be reevaluated in a couple of weeks.