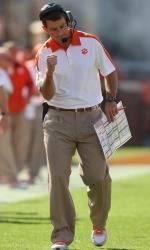 In December, a finalists’ list will be announced and comprised of five to ten coaches. Finalists will attend an awards dinner on Jan. 19, 2012 in Houston, Texas at the HYATT Regency Hotel Downtown, where the winner will be announced live. The Bryant Coach of the Year Award is the only college coaching honor voted on after all of the bowl games are concluded.

January’s event will also recognize former University of Iowa Head Football Coach Hayden Fry, who will receive the Bryant Lifetime Achievement Award. The award recognizes excellence in coaching on and off the field during a career, allowing recipients to take their place in history alongside legends such as Paul “Bear” Bryant. Recent Lifetime Achievement recipients include Barry Switzer, Glenn “Bo” Schembechler, and Bobby Bowden.

The Bryant Awards honor excellence in coaching while raising funds to fight heart disease and stroke, the nation’s No. 1 and No. 3 killers. Bryant himself suffered a heart attack prior to his death in 1983. Funds raised benefit research, community education and outreach programs of the AHA. For more information, or to purchase tickets or a table for the event, contact Kristin Rodriguez at 713-610-5026 or visit www.bryantawards.com.