Man of Many Talents

He’s one of the most fascinating stories I’ve ever been around.” Those words from Head Coach Dabo Swinney elucidate the story of Regan Upshaw.

The 5’11”, 240-pound defensive end has already more than doubled his career tackle and quarterback pressure totals this season as he sees significant production in his fifth year on the team.

The two-time national champion did not always have a clear path to reach this point. While many players who end up at the Division I level can claim they began playing football in diapers, Upshaw’s first competitive football game did not occur until Sept. 2, 2017 as a member of the Tigers.

Upshaw’s father, also named Regan, had a nine-year career in the NFL after being drafted No. 12 overall in the 1996 NFL draft by the Tampa Bay Buccaneers (the first draft pick ever made by future Hall of Fame Head Coach Tony Dungy). Despite this, the Upshaw household was not immersed in the football world.

“I didn’t really go to games,” admitted the younger Upshaw. “My dad would handle business and come back.”

Despite this, when the older Upshaw stumbled upon a Clemson football camp when his son was in high school, it set the wheels in motion for both him and his brother, Taylor, who is a defensive lineman at Michigan.

While football may not have been discussed at the kitchen table, rugby and hockey were. Upshaw even had professional rugby opportunities from teams in France and Wales. Ultimately, he chose football to compete against some of the world’s top athletes.

The original walk-on impressed Defensive Coordinator and Linebackers Coach Brent Venables in camp and made the team as a linebacker in 2016. After earning a scholarship and spending three seasons at linebacker, Swinney, Venables and Defensive Ends Coach Lemanski Hall suggested a move to defensive end. While he may not have the typical measurables of a defensive end, one cannot argue with the results.

His coaches would certainly agree with that sentiment.

“His development from the spring to where he is now…it’s a complete and total transformation,” explained Venables. “Regan has put in a lot of work. He shows his high motor, explosiveness, his tremendous first step, power and he can really run. He has concrete in his helmet. He is a critical part of what we’re doing this year.”

Hall was not short on praise either.

“I’m extremely excited and proud of his development. He has always had some pass-rush skills. He has always been explosive and gives great effort. From the start, I always said if he could dial in and be engaged and learn what we’re doing, he’d have an opportunity. Now, he is taking advantage of those opportunities, so I’m extremely proud and happy for him.” 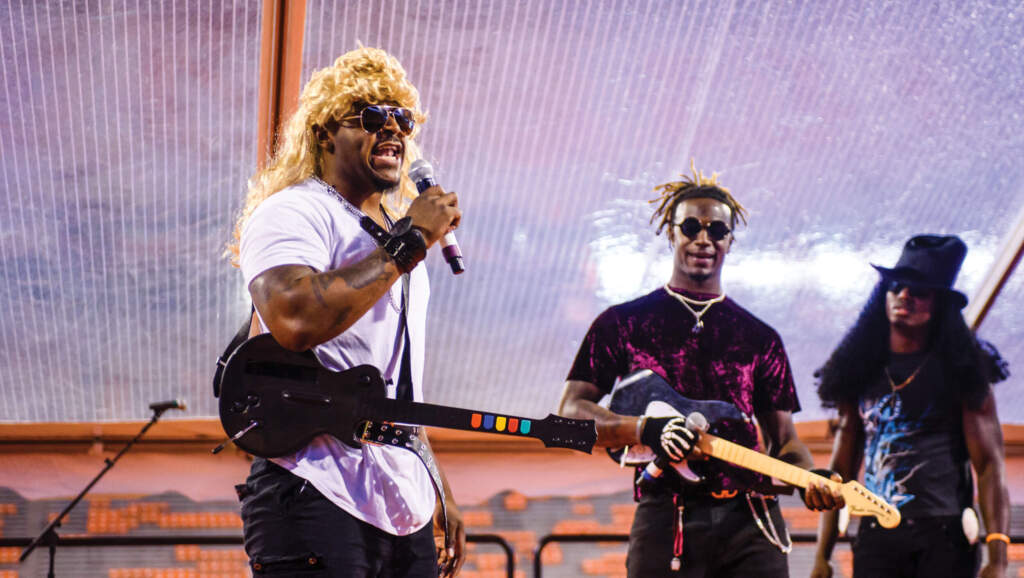 While Upshaw has blossomed on the field this season, he has grown significantly off the field as well as a P.A.W. Journey ambassador. P.A.W. Journey was established by Swinney and Jeff Davis, current assistant athletic director for football player relations and a former Tiger star linebacker.

One of Upshaw’s favorite experiences was the New York business trip, when he and some of his teammates met with companies, including The Late Show with Stephen Colbert, Spectrum and Credit Suisse, among others, during spring break.

“I can’t tell you what I’ll remember most, because we’re not done,” said Upshaw.

The multi-talented Upshaw is also a founding member of CM Banana Clip, an air guitar band, which he claims was his idea. It features himself (“Rickyy Diamond”), current Clemson wide receiver Josh Jackson and former Tiger safety Denzel Johnson.

“Why is anything called anything?” laughed Upshaw when asked where the name came from.

They have performed at many events, including Tigerama as well as at various downtown venues and birthday parties, and they are hoping for a redemption tour after the COVID-19 pandemic ends.

Upshaw also has what Clemson offensive lineman Cade Stewart calls a friendly competition. Upshaw, however, views it as less of a competition and more of a domination.

“I wouldn’t say it’s a competition between Cade and me. Cade fishes, but I am an angler…a pro fisherman.”

In fact, Upshaw and Johnson recently almost broke the state of South Carolina record for the largest snowy grouper catch in Charleston. Unfortunately, his biggest bite did not result in a catch. Upshaw and his father almost reeled in a large shark with a stingray as bait when he was 14 years old. Unfortunately, they were no match for the large fish that day.

Upshaw recently received his bachelor’s degree in economics and looks forward to the day he can go into business with his fellow rock star, Johnson, who currently sells life insurance for Northwestern Mutual.

Whenever Upshaw’s career concludes, he will always cherish his days at Clemson. True to his story, Upshaw wants to be remembered as a passionate and committed team member and a relentless competitor who has a positive attitude, no matter the circumstance.

Upshaw also wanted to share his appreciation of the fans.

“I’m so thankful to our fans. They really make it an event because they bring the energy and the juice to the game. It makes you want to perform, and it gives the team and the whole atmosphere energy. That’s what it’s all about.

“It’s about bringing energy to people and bringing joy to people. That has become one of my biggest motivations…to motivate someone by how I play and make someone say ‘wow,’ and say they will commit and do something. My story on paper doesn’t look like it will work out. If I believe what everyone else tells me about my dreams and goals, I would not achieve anything.”