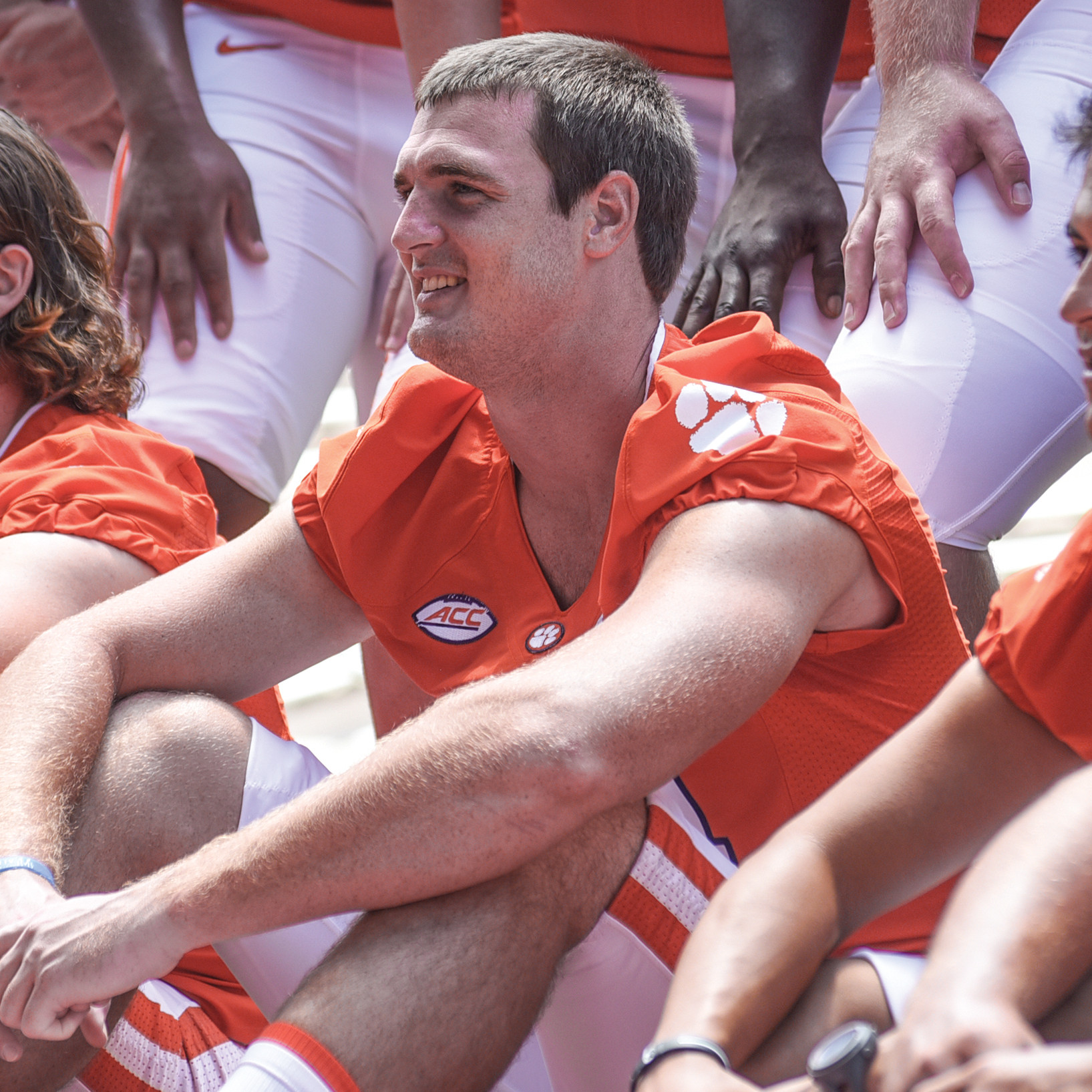 For many people, their first memory of Stanton Seckinger, the football player, is probably an image of him outstretched across the goal line to score a fourth-quarter touchdown against Georgia in the first game of the 2013 season.

Beyond that, fans may remember some of the early catches of his career in 2012, or maybe even that he was the redshirt wide receiver who injured his ankle running down the Hill prior to the Auburn game in 2011. I remember all of these, but mine go back further, before he wore orange and purple, back when he still wore the garnet and gray of Porter-Gaud School, where we both graduated.

One play I remember in particular involved him catching a 15-yard pass at the opponent’s 25-yard line. He whipped around to start running downfield, nimbly sidestepped a player diving at his ankles, stiff-armed another and coasted into the endzone for one of his 26 touchdowns as a senior.

Later that year, as a high school senior, there was nothing more impressive than seeing one of your classmates put on a hat and declare his intentions to play for the same school you were going to.

Now heading into his final year on the Clemson team, Seckinger looks forward to another season with a promising young squad. But before this season kicks off, he took some time to reflect on where he has been, what lessons he has taken in and what he knows now that he wishes he knew coming in.

“It’s not so much what I wish I would have learned, but what I would have applied,” admitted Seckinger. “I didn’t have a whole lot of confidence coming in because of the size of our school, and then stepping up to this. Luckily, I redshirted, but it still took me about a year and a half or so to start adjusting.”

For Seckinger, a major milestone in his career was learning to play with confidence. He views it as a vital part of doing just about anything.

“Not having confidence doesn’t let you play to your full potential.”

The boost of confidence was not a sudden one, however, and it was not until his redshirt sophomore year when he really felt the need to change. He attributed the shift in mentality in large part due to the simple fact that the team needed him.

“At that point it was my redshirt sophomore year and I told myself that something needed to change and I needed to quit being such a headcase,” said #81. “That was one of the times when the team needed me to step up that year. I knew what it was that was holding me back and I needed to drop it and have confidence in myself.”

He also attributed his shift in mindset to the role his faith plays in his life.

“I’m a Christian and I recognized that God gave me the gift to play this game. I’m almost doing Him an injustice by selling myself short with what was going on in my mind.”

Fortunately for him, Clemson recruited him as a wide receiver and told him that was where they wanted him to be. But as it turned out, Dwayne Allen declared for the NFL draft after his junior season and the team was lacking depth at the tight end position.

“They didn’t force me to move…they asked if I would mind because they originally told me I wouldn’t have to and that I might not want to,” stated Seckinger. “I said whatever helps the team, and if I need to do that then I will do that.”

The switch from wide receiver is more than just a new playbook, but also a mental and physical change as well.

“The tough part was not only learning the offense, but also receivers aren’t necessarily as physical…they’re more finesse players. Tight end is a mixture of both. What I struggled with was moving from 200 pounds to 240 pounds. The tough part is you feel heavier and your knees and ankles are hurt because there’s more stress on your joints and ligaments than normal. Since I’ve gained a lot of weight, I’ve had a lot more injuries. That’s just the nature of the beast.”

Since his redshirt freshman year, Seckinger has endured ankle issues, a dislocated kneecap and a knee injury in last year’s South Carolina game, which sidelined him for the bowl game.

Despite the change, Seckinger said he still gets to play wide receiver a few times every year. He attributes this to both his experience at wide receiver and his general knowledge of the offense.

“I remember a game when I hadn’t played receiver in two years and I couldn’t really remember every play,” recalled Seckinger. “We’re playing up at Boston College and they tell me I’m in at receiver. So I run out there.

“I look over at Charone (Peake) and I ask him, ‘What do I do?’ He told me what route to run and we ended up scoring that drive. If it was a 10-play drive, I probably had to ask Charone what route to run for four or five of the plays. But that’s where they needed me.”

Throughout our talk, he frequently referenced head coach Dabo Swinney, sharing numerous quotes he has picked up from his years of being on the team. But at one point, he paused because he could not recall the exact words for one quote about discipline and regret. It then begs the question…how many coach Swinney quotes does he know?

“You don’t even know,” laughed Seckinger. “I quote him all the time. He recycles a lot of quotes, so they stick with you.

“All the quotes are good stuff…it’s all applicable. So now when I hear a friend say, ‘I can’t do this,’ it’s almost like coach Swinney kicks in and I say, ‘Don’t you dare say that. If you say you can’t do it, you’re not going to be able to do it.’”

The importance of having the right mentality is one aspect that is evident not only when talking to Seckinger, but for any player on the team. It is a focused mindset he has honed and shaped over the past several years as the Tigers have experienced an unprecedented period of success.

“I think the mentality of the team over the past few years has definitely changed,” said Seckinger. “Every year you have a group of guys who think we can win the national title, whether we’re ranked or not. The trick is getting everyone on the team to believe that and to work towards that. When you get there, a lot of crazy things can happen.”

As one would expect, there are many  things a player will miss after being on a team for five years. For Seckinger, one aspect stands out in particular…the postgame locker room.

“Scoring touchdowns is awesome, making a block and having the running back run off it is awesome, being with the guys all the time is fun. But there’s something about going out there, laying it out on the line, winning the game and going back in the locker room and celebrating with the guys who you’ve been with for five years.”

Now one of the veteran leaders, Seckinger plays a valuable role both on the field and off as he helps guide the newcomers. One of the aspects he hopes to help most with is encouraging the freshmen who may be “wide-eyed” about being on the team and helping them find their confidence. He said that every player was recruited for a reason and they are all fully capable of playing for the team.

He eventually remembered the quote.

“The pain of discipline or the pain of regret. That’s what it is.”

Seckinger then added, “Don’t tell coach Swinney. I don’t want him to find out!”