As the only player on the 2022 team in his sixth season at Clemson, it is safe to say tight end Luke Price has some years under his belt as a part of the Tiger program. The decision to attend Clemson University was a no-brainer for the Dillon, S.C. native.

“I am trying to win championships at the end of the day.”

Price has always been drawn to the competitive nature of football, as most in his family of six played football.

“I wanted to play ever since I was a little kid.”

Price is not the only one in his family who has been a part of the Tiger football program. His other brother, Phillip, was as an offensive tackle from 2007-11.

When asked about his favorite memory during his six-year career at Clemson, the younger Price’s immediate answer was the 2018 season national championship game in Santa Clara, Calif., where the Tigers dominated Alabama.

“It felt like we were on top of the mountain and we were better than everyone else. That was the longest season in college football, and it felt great to go 15-0. There were so many firsts that season. We were the first team to do it (15-0 record in the modern era), and you can never take that away from us.”

Being a part of that championship squad meant a lot to Price as he began to build a legacy of his own at Clemson.

“Only 120 guys can say they were a part of the 2018 national championship team, and I was one of them. This is a really special place.”

With Clemson again in the hunt to make a championship run, Price is ecstatic about this season, which became even more memorable with his first career receiving touchdown against Miami (Fla.) last weekend.

Price, who is a mainstay on several special teams, is confident in the Tigers’ ability to get back to where they were just a few years ago in playoff and national championship contention.

In the 2019 offseason, Price easily transitioned from linebacker to tight end to provide more to the team. He emphasized that through the ups and downs of his career, he loves to be that leader for the next generation of Tiger players.

“You know what it takes to win…to win a championship. You understand that no matter what, guts have to go into it. I know the consistency, amount of drive and amount of focus you need to have every single day during the year and offseason.”

Through his six years, Price has had the opportunity to learn from many different coaches at each position.

“You learn something new from each coach. They have their own coaching style and ideas. I’ve taken bits and pieces from every single one to get better.”

“I want to win and I want everyone else to win, because it is one of the best feelings in the world.”

Price has a bright future in the work world. He has started that process now, which is enhanced due to his work as a P.A.W. Journey ambassador.

“They are the leaders on the team. To be a part of that small group means they think you will have an impact on others as you show maturity and growth. It helps build myself and everyone else into a better man.”

Outside of football, Price’s involvement in P.A.W. Journey is starting to pay off, as he completed a microinternship in 2019 at HCA Florida Memorial Hospital in Jacksonville.

Price earned his degree in health science in December 2020 and added a degree in psychology 12 months later. To say that Price has several viable paths after graduation is an understatement.

“If I get a shot in the NFL, then I get a shot. That has been the ultimate goal since I was a kid. If it doesn’t work out, then physical therapy school is a backup plan. Other people have said I should get into coaching…there are options.”

His appreciation for Clemson has not gone unnoticed. Price understands better than most what it means to play for the Tigers.

“The Tiger Paw is an international brand. You have to represent it the way you would represent your last name…with respect and reverence. You represent all the guys on the team now, all those before and all those after.”

Clearly, Price has made the most of his experience, as he has chosen to exercise his fifth year and COVID year at Clemson. He has been a part of four different ACC Atlantic Division title teams, four ACC championship squads and one national championship team. 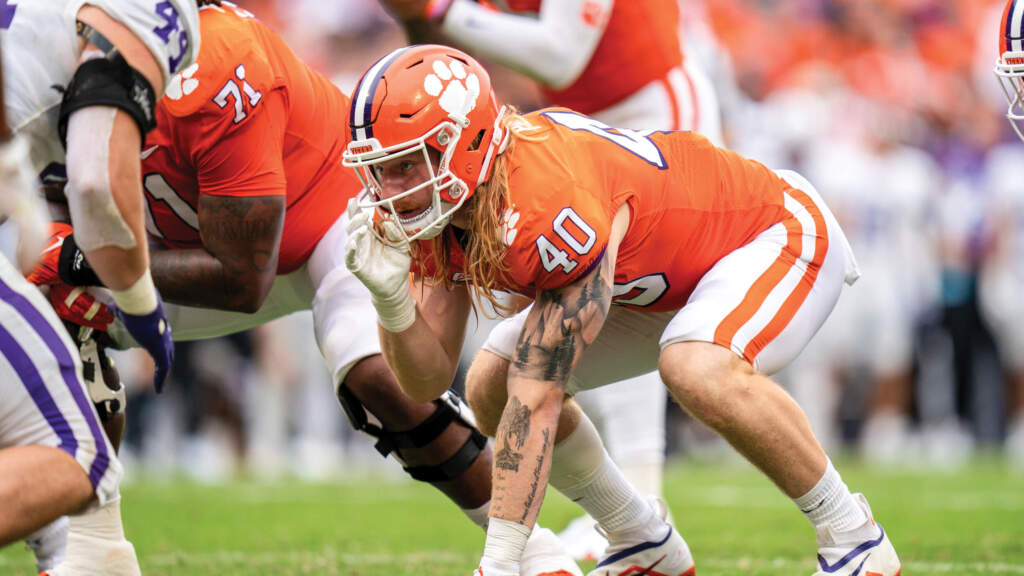