Setbacks has not stopped tight end Luke Price from achieving his main goal…to be on the field playing football with his team. The 2020 season, which was dominated by the COVID-19 pandemic, was not easy for anyone, but it was an especially trying time for the Dillon, S.C. native.

After much doubt that the season would happen at all, college football was given the green light to move forward. As the team was gearing up for another year, during the last scrimmage of fall camp, Price went down with a knee injury. It was so bad that it ended his season.

“I had had a great fall camp and it was going to be a great season. We were so deep at the tight end position and there was going to be a bunch of guys playing. I caught a ball and got hit, and with all the other stuff that had been going on that year, it was frustrating.”

Price was forced to have surgery on his knee. If the injury was not enough, the operation was pushed back when he received a false-positive COVID-19 test result right before his scheduled surgery. The long months of rehabilitation afterwards were not much better.

“After I finally had surgery in October, the months of rehab were extremely slow, and it was so frustrating that sometimes I would break down and wonder why this had to happen to me. But at some point, you either let that consume you or you keep moving, so I chose to keep moving. I had to eventually accept it and get back to work.”

Price officially returned to the gridiron this past summer, and even after being out of the game for over seven months, he explained that he never had any hesitation or nervousness when stepping back on the field.

“With injuries like mine, you’re going to get stronger. It helps to be confident in what you’re doing. I missed the entire season and spring, so I was ready and excited to be back out there.”

The senior, whose brother, Phillip, played football for the Tigers, has been a part of the Clemson Family for five years, and there has been one message from Head Coach Dabo Swinney that has stuck with him through it all.

“One saying I’ve always liked is ‘Win the Day.’ If you can win that day focusing on what you need to do and whatever your job requires of you and be successful in that, then you’ve won that day. There’s so much that goes into it, because we strive for perfection…that’s the goal. Winning the day means being perfect.”

During his time as a Tiger, Price has been able to experience a lot of great moments, including four ACC championships and a national title. However, there is one special memory that comes to mind for #40.

“During the 2019 season against Georgia Tech, I went into the game playing tight end for the first time, and I had a penalty called on me on a play we had practiced all season long.

“Coach (Danny) Pearman got so frustrated at me, but all I could think of was being out there on the field and seeing all those people. Then we went down and scored, and it was exhilarating. That has to be one of the most exciting moments of my life.” 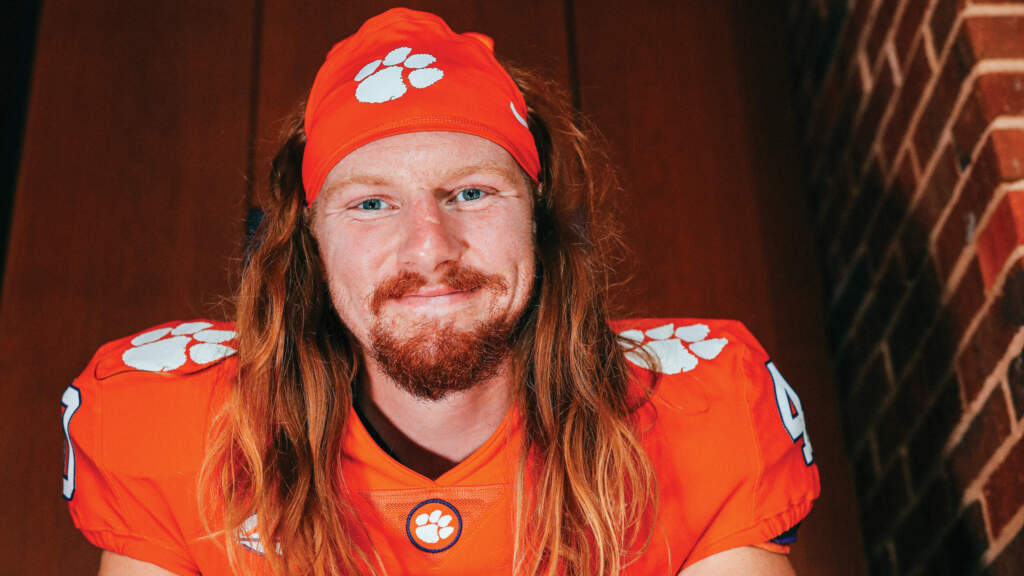