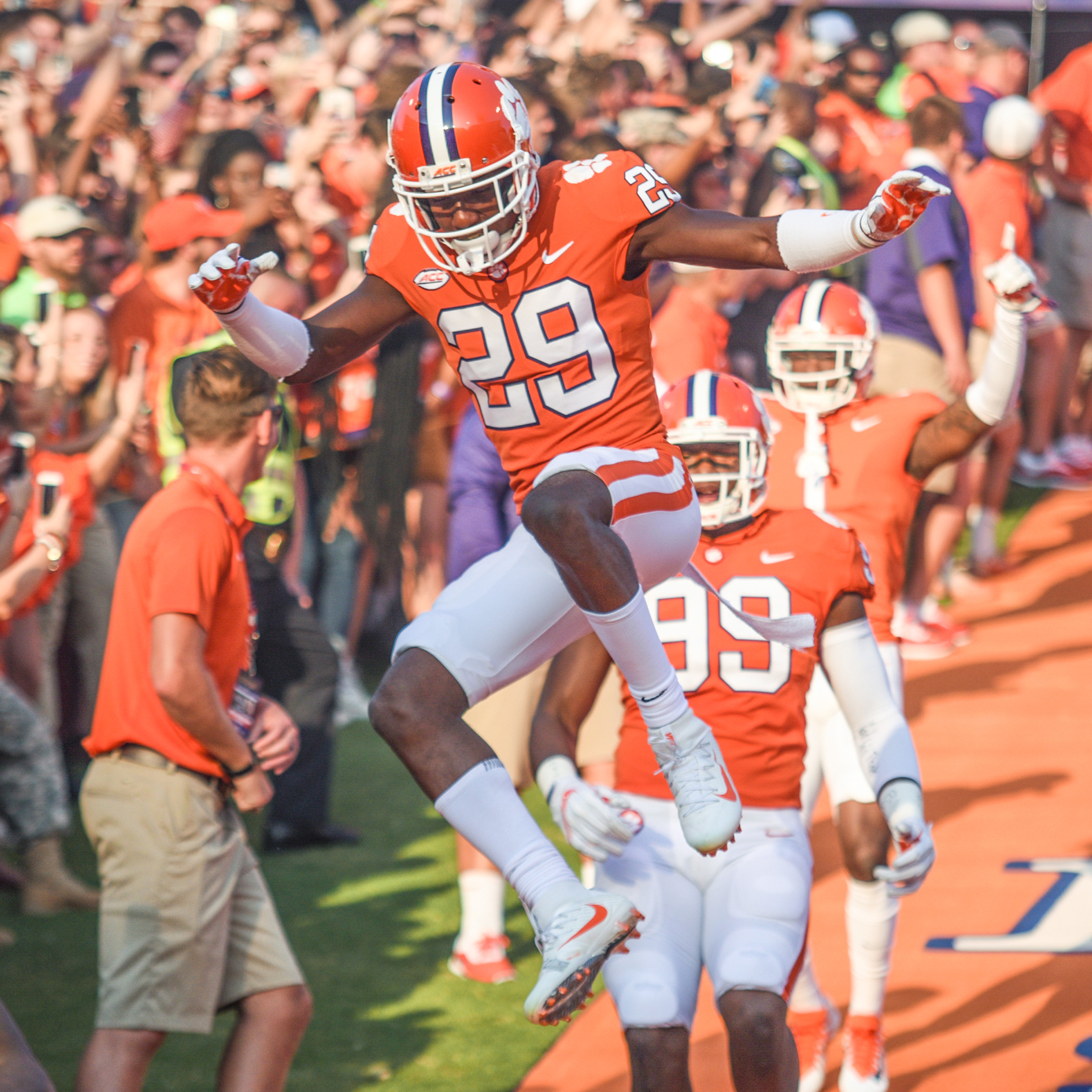 Marcus Edmond will always remember being under the dogpile.

Just a short while earlier, he had watched a game-winning field-goal attempt from NC State’s placekicker sail wide right, forcing overtime for the Tigers and Wolfpack in the seventh game of what ended up being Clemson’s 2016 national championship season.

But without knowing what was to come, the focus was keeping those title dreams alive, and in that moment, that meant not letting the Wolfpack leave Death Valley with a win.

Clemson scored on its opening drive of overtime on a 10-yard touchdown pass from Deshaun Watson to Artavis Scott, and then it was on Edmond and the rest of the defense to make sure NC State did not reciprocate.

On the first play of the Wolfpack’s drive, quarterback Ryan Finley decided to go for the endzone with his first throw, but he did not find one of his own receivers. Instead, the ball was intercepted by Edmond. Game over. Tigers win.

“The NC State interception last year was big for me,” admitted Edmond. “It comes second to winning the national championship in my book. The excitement and being under the dogpile barely breathing is something I will also remember forever.

The interception against NC State was not the only critical, game-winning play that Edmond made on Clemson’s route to the national title. He was the difference-maker late in the game just two weeks prior against Louisville.

It was fourth-and-12 in the redzone on the Cardinals’ final drive of the game with Clemson leading 42-36 when Lamar Jackson connected with James Quick near the sideline. The wideout turned and darted for the first-down marker, but was foiled by Edmond, who forced Quick out of bounds just one yard shy of a first down. Clemson took over on its own three and ran out the clock.

Entering his final season, Edmond had 26 tackles in 385 snaps in 32 career games, three of which he started. He appeared in every game in 2015 before seeing an even more expanded role in 2016, ultimately earning a share of the defense’s 12th Man Award along with Austin Bryant and Scott Pagano.

Long before he was anchoring the secondary on Clemson’s title team, the Hopkins, S.C., native started his football career as a youngster.

“My first memory playing football was when I played Pop Warner as a quarterback for the Hopkins Packers. I would always score off a simple quarterback sneak right up the middle.”

He eventually made the switch to defense and was interested in NC State when the time came to decide where to go to college because of the Wolfpack’s defensive backs coach, Mike Reed. But the cornerback had always liked Clemson, and Reed was hired by head coach Dabo Swinney to lead Tiger defensive backs right around the time that Edmond decided to commit.

“I came to Clemson because I always liked Clemson…watching them play as I grew up. I got the opportunity to come here when coach Reed was hired here and offered me to come along with him from NC State.”

He entered as a freshman in 2013 in a defensive backs class that included Ryan Carter, and the two both redshirted that first season. They have grown as close as brothers during their time in Tigertown.

“Ryan Carter is team member who allowed me to get through some of the tough times as a player. We both feed off each other, as we came in together and are now fifth-year graduates. We always found the good in any situation on the field and off. We’ve really grown to become brothers.”

It has been people like Carter who have truly defined Edmond’s Clemson experience, and he is forever grateful for the impact they have made on his life.

“My Clemson experience has meant a lot to me. I’ve created great bonds that will last forever and brothers who I will always have. And to receive my degree from a top program is also very big. Clemson is the true definition of family.”

The graphic communications degree-holder has found a home off the gridiron as well, completing two internships with the Clemson athletic communications office working with Jeff Kallin, associate director of new & creative media, and Nik Conklin, coordinator of digital content. The projects that he worked on included wall graphics and art for the student-athlete enrichment center as well as social media graphics for various Clemson athletic social media accounts.

“One of the things that Marcus brought to us was a different way of looking at things that we were doing already,” said Kallin. “It was really cool, from a contribution standpoint, for us to be able to run some of the content across his eyes and see what he was thinking about things in real time.

“When he first applied, his portfolio was really strong, and he was doing a lot on his own. When we’re looking at students and how we evaluate them, a lot of times, how they get better is when they spend time working on their own passions versus just what we tell them.

“Marcus had a lot of stuff going on outside, and you could tell that he was really strong not only in (Adobe) Illustrator with logo design, but also with photo composition in Photoshop. He made an impact in a lot of areas.”

“I loved working with Jeff and Nik,” stated Edmond. “I learned a lot from them design-wise and how the flow of an actual workplace goes. I liked the internship so much that I came back and did it again the next summer. It was great.”

In addition to graphic creation, Edmond was also the star of Clemson football’s 2016 hype film, The Dream.

Whether he was making impactful plays on the field or impactful content off it, Edmond has appreciated the opportunities he has received during his Tiger career and those who have helped to make it one to remember.

“I want to tell the Clemson family thanks for all the support in making my college career very special and one of the greatest memories of my life.”