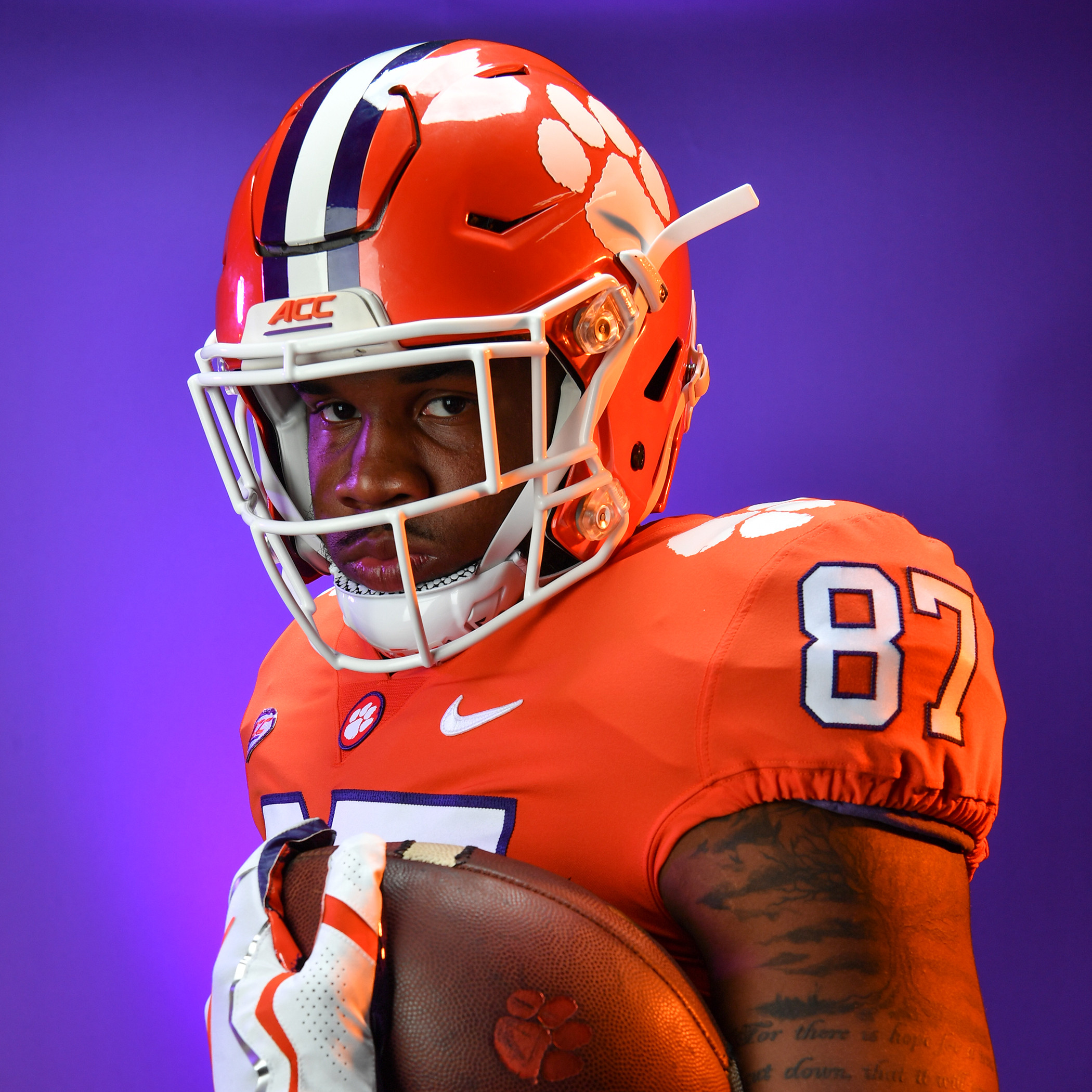 Living in the Moment

Though it reads like a quote straight from a Hollywood sports drama script, that following football maxim is the approach that Clemson tight end D.J. Greenlee has adopted throughout his lifelong commitment to the game of football.

“Play every play like it’s your last play ever, because you don’t know if the next one will come.”

Now in his fifth and final season as a graduate student, Greenlee is making the most of every opportunity that he is being given as a Tiger, enjoying the last leg of a lifelong dream.

The son of Larry Greenlee, the longtime assistant strength & conditioning coach for Tiger football, D.J. is a native of Clemson, having attended nearby Daniel High School. A football enthusiast from the get-go, Greenlee spent the better part of his formative years around the Tiger program.

Shadowing his father and allowing his passion for the game of football to flourish during the process, Greenlee developed a love for Clemson football at a young age.

Desiring to play for the Tigers from the first time he suited up for the Central Tigers in youth football, to the milestone moment when he received an offer from Clemson during his junior season in high school, Greenlee had a passion for football ingrained in him rather naturally. The cousin of NFL players DeAndre Hopkins and Terrance Smith, Greenlee’s athletic bloodline is rich, and he has carried forth with that familial athletic heritage in grand fashion.

A former all-region linebacker at Daniel High School, Greenlee was converted to tight end upon beginning his Clemson career in 2013, a difficult transition that he was able to undergo quite swimmingly. Since then, Greenlee has been a precious commodity in the locker room and on the practice field.

While the abundance of talent sported by Clemson’s roster has understandably cut into the amount of game action that Greenlee has been able to take part in throughout his college tenure, his contributions on special teams have certainly been of value. And the vivid memories that Greenlee has been able to glean throughout the experience of living out his dream as a Clemson football player have been remuneration enough.

“I had always seen it in the stands,” stated a nostalgic Greenlee when discussing his first Clemson home game as a player. “But I had never turned the corner on the bus, when you have 85,000 fans going crazy for you.”

Greenlee boasts the wisdom of a seasoned veteran and a knack for serving as a proverbial shoulder for younger players to lean on when in need of advice, which is attributable to his abundance of remarkable characteristics.

Combined with the seamless switch from the defensive side of the ball to the offense, Greenlee’s impressive recovery from a major knee injury suffered during his freshman campaign helped to establish a reputation for the tight end as that of a workhorse. A chip off of the old block, Greenlee gleaned that work ethic from his father, whose reputation throughout Clemson athletics is glowing, to say the least.

“My dad won’t let me be lazy,” admitted Greenlee when explaining the impact his father has had on his life. “He has always been there for me, motivating me to work hard, and I’m grateful that I have someone like that in my life.”

Eager to follow through on the tutelage bestowed upon him by his father, Greenlee never allows any grass to grow under his feet. Always keen to improve by any means necessary, he views success as something that is never final and should always be sought after.

“You might not play a lot, but when you do, give it your best shot,” said Greenlee when speaking on his outlook over the course of his playing career. “It might be tough, but just know that the light is brighter on the other side.”

Not exactly satiated by the taste of sweet victory from last season, Greenlee hopes to take part in another national championship run this season. Aiming to be a member of what could be the winningest graduating class in school history, Greenlee takes great pride in all of the Tigers’ accomplishments that have been achieved since he joined the fray four years ago.

After all, Greenlee recognizes that the success of the team is a reflection of the commitment of the individuals that make it up, and above all else, Greenlee has been fully and wholeheartedly committed to the Tigers since arriving on campus.

Grateful for the opportunities that he has been granted in life, Greenlee is constantly upbeat, with his infectious smile and charismatic attitude, making him the perfect senior leader for the tight-knit family that is Clemson football.

For Greenlee, football is a gateway to so much more in life, and each gift that it grants is a blessing. So, for as long as he is able, Greenlee will harness the power of those blessings by taking it one day at a time and one play at a time, living in the moment, no matter what.