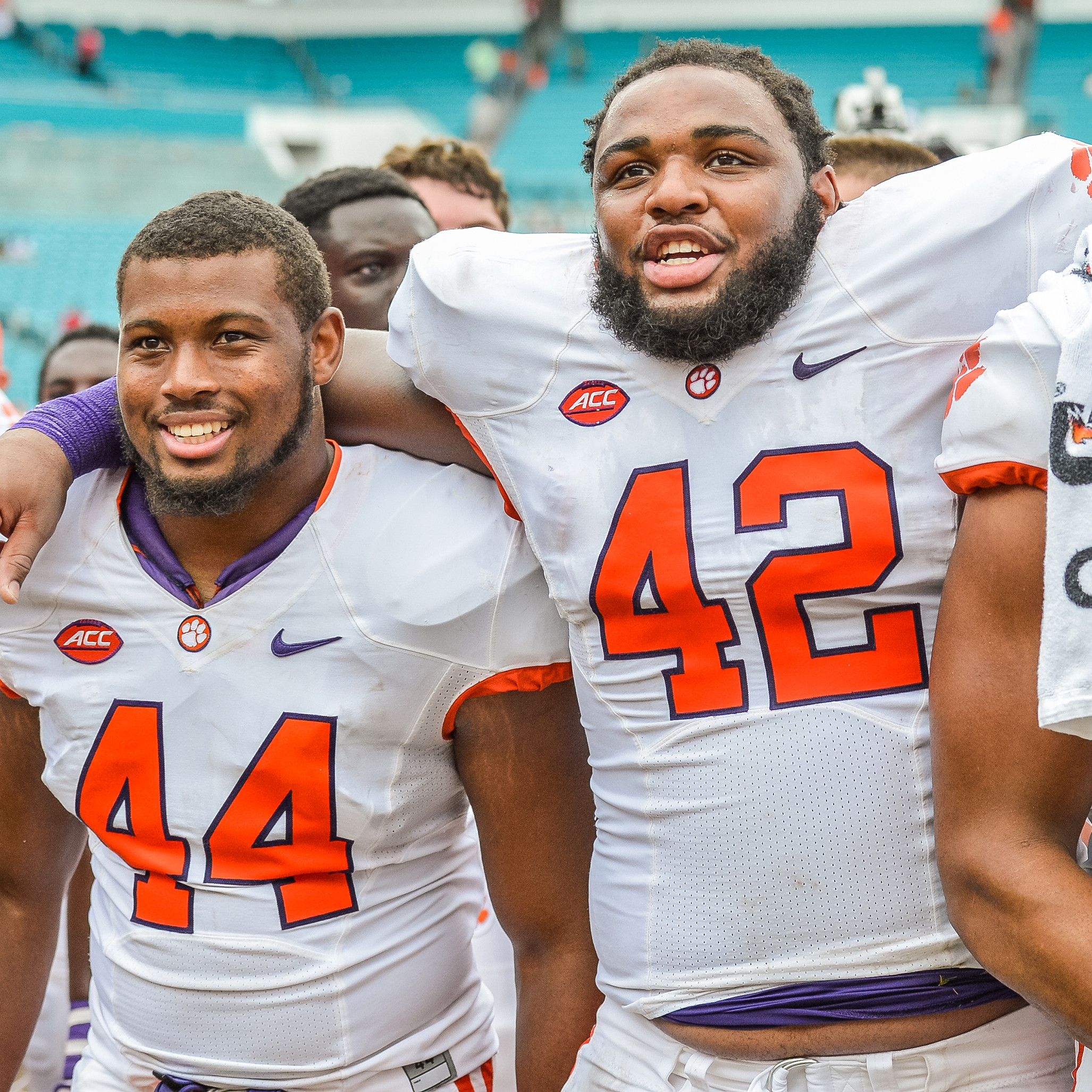 During any Clemson game, Christian Wilkins is never far from the action. On defense, most of the time, Wilkins makes life for opposing offenses a nightmare alongside the rest of the Tigers’ dominant defensive linemen.

Other times, he finds different ways to stand out. Whether it’s jumping in midway through teammate interviews or “Swag Surfing’” with the rest of the defensive line in a downpour, Wilkins always adds an extra element of fun and swagger into the Tigers’ defense, as he credits a lot of his positive energy and fervor to one simple thing…his passion for football.

“That comes from my love of the game, my teammates and what I do. Football is such an amazing game and it brings people together from all diverse backgrounds.

“I generally love that and being with my guys. I try to be the best teammate I can be and I know that brings a lot of energy. Hopefully, I can be that spark that ignites the rest of the team.”

As the youngest of eight siblings, Wilkins has been the product of a strong family upbringing, each of whom have imparted something in one way or another upon their little brother.

“My family is a big part of why I do what I do and the person I am, and it starts with my immediate family with my mom and my siblings.

“When you’re the youngest of eight kids, everyone raises you. It takes a village to raise a child, and I’m a direct receiver of that. It couldn’t be any more apparent in my life and situation, so I try to take as much as I can from everyone.

“My mother is a very strong woman, including how she was able to cope with a lot of things. I took on that. With my grandfather, I try to take on his personality.”

Many are familiar with the story of Wilkins’ late grandfather, Eurie Stamps Sr., who had a profound impact on him and the kind of man he has become. Stamps was accidently killed by a police officer in Framingham, Mass., on Jan. 5, 2011. He was a guiding light for Wilkins and continues to be. He wears #42 in honor of Stamps, who was born in 1942.

While Wilkins is the youngest little brother of his own family, he has blossomed into one of the big brothers of a stingy Clemson defense with a swagger and bond few have the capability of matching.

“These guys on the defensive line are the ones who I’m close to. Being the youngest sibling in my family, I’m one of the old heads of the group now and I feel more like the older brother getting close with all the guys. ‘Cle’ (Ferrell), Austin (Bryant), Dexter (Lawrence), Albert (Huggins), Jabril (Robinson)…all these guys are my brothers now.”

As a battle-tested junior having played in blistering heat, torrential downpours and two national championship games the past three seasons, he has become a big brother of sorts to the rest of his younger Clemson teammates. With his experiences in such environments and his own life experiences, Wilkins continues to keep doing what he does best…love and serve.

“Two of the most powerful things you can do are to love and serve, because it’s an unselfish and uncommon thing to do. That’s the message I often try to instill in everyone and in the young guys.

“It’s easy to get caught up in everything going on, because a lot is obviously asked of us and a lot of time people get so much joy from us, and you must respect that. Once you serve someone and you love others, it gives you more perspective on life.”

Of course, even a big brother and veteran like Wilkins continues to undergo his own growing process. Through his time at Clemson, Wilkins has continued to amass more role models. These have come in the form of his football coaches who have not only helped the Springfield, Mass., native mold his craft, but have continued to mold him into a better man.

“Coach (Brent) Venables did an excellent job recruiting me and getting me down here. I believed in what he told me when he got me to come for a visit. Coach (Dabo) Swinney speaks for himself. He’s such a player’s coach and I love being around him. He’s a lot like me in a lot of ways, always trying to be positive.

“Coach (Todd) Bates has done a good job coming in as the defensive line coach, and I’ve enjoyed getting close with him as well. Coach (Dan) Brooks was the same as well before he retired, and I had a great relationship with him. I couldn’t have asked for better male figures in my life.”

Despite all that has occurred in his life, Wilkins has managed to remain the same person he was when he arrived in 2015. How does one of the most well-known defensive tackles in the country manage to stay humble despite the continuous accolades heaped upon him?

“It’s really just knowing that there’s always room for improvement, no matter how well you do. The best of the best always try to get better. It’s just what I want to do and I try to stay humble, especially since I know there’s always someone who can do something better than I can. That’s the way I try to think and keep a humble spirit.

When it comes to the extra attention, Wilkins said that he hasn’t changed much as a person in his three years at Clemson. Rather, he has continued his evolution as a man.

Of course for Wilkins, that also means never forgetting to have that same element of fun, especially alongside his teammates. Going forward, no matter what his future holds, Wilkins will continue to apply what he has learned from his family, teammates and coaches…to keep on moving forward on whatever path life takes him.