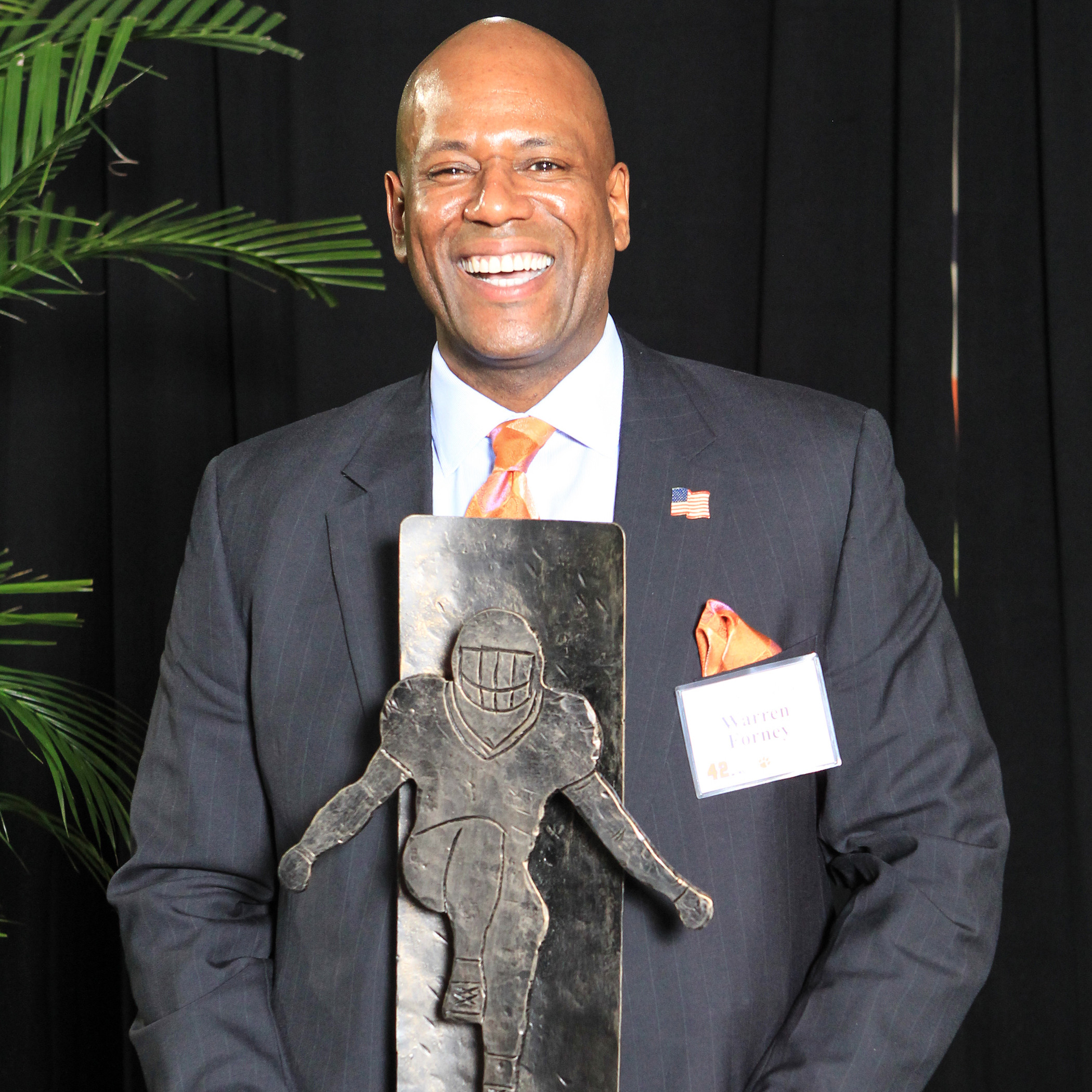 There are many awards and accolades presented to college football players each year. Every fan will recognize the Heisman Trophy, Thorpe Award or AP All-America team when mentioned.

This year, Warren Forney, a former Tiger defensive lineman, received the Brian Dawkins Lifetime Achievement Award. While this award may not be as well known to some as the awards mentioned above, its significance and what it stands for cannot be overlooked. No one is more deserving than Forney, who played for the Tigers from 1991-95 when I was a student working in the sports information office.

Head coach Dabo Swinney established the award after he received the Bobby Dodd National Coach-of-the-Year Award in 2011. That award takes into account performance on the field, but also qualities like leadership and community service.

A former Tiger who has been out of school for at least 10 years is honored with the award, named after Brian Dawkins, a nine-time Pro Bowl selection and one of the most beloved Philadelphia Eagles of all time. Dawkins was a three-time All-ACC selection from 1992-95 and was an All-American in 1995.

Forney was a four-year letterman (1991,92,94,95). He was part of an ACC title in 1991 and was a senior on the 1995 Gator Bowl squad. He was a starter in 1992 and was third on the team in tackles with 83. He battled injuries the rest of his career, but was a solid contributor, especially on the 1995 Gator Bowl team that won its last five games of the regular season.

As a senior, Forney won the Algernon Sydney Sullivan Award from Clemson University. The award is given annually “in recognition of the recipient’s influence for good, excellence in maintaining high ideals of living and genuine and disinterested service to others.” It was named in honor of the first president of the New York Southern Society and was established by an agreement between the society and Clemson University.

Following his playing career at Clemson, Forney completed his undergraduate degree in industrial education (he later earned two master’s degrees, one from Clemson in human resources and one in business administration from Sullivan University). He had an opportunity to play at the next level and was a free-agent signee of the 49ers, but injuries and a desire to see the next chapter in his life ended his time on the gridiron.

“After I had my cup of coffee in the NFL, Gary Wade, who was in charge of Clemson’s strength training, called and offered me a position on his staff,” recalled Forney. “Coach (Tommy) West wanted me back at Clemson, and I was blessed to have the opportunity.”

The ACC commissioner at the time, Gene Corrigan, had an internship available at the conference office and saw Forney as the perfect fit.

“Commissioner Corrigan was like a grandfather to me,” remembered Forney. “Even though I had a full-time job, he convinced me what a great opportunity this was. He compared it to when he left what he thought was his dream job, the athletic director at Notre Dame, to come to the ACC. He told me this job would allow me to meet so many people and take me places I had never been.”

Corrigan was 100 percent on the mark. To his credit, Corrigan gets an assist for the most important contact Forney could have ever made. While at the ACC, he met his future wife, Tamla. The North Carolina graduate was also interning in Greensboro. The couple will celebrate their 17th wedding anniversary later this month and are proud parents of a daughter, Annia Elizabeth, and son, Camden Simeon.

During his time at the ACC office, Forney also became close to associate commissioner Tom Mickle and his wife (fellow Clemson graduate Jill Mixon-Mickle). Forney still fondly remembers his time with the Mickles.

“If there was a game, no matter the sport, Tom, Jill and I would go. If commissioner Corrigan was like a grandfather to me, Tom was like a father. I always thought we would work together somewhere down the road, but he passed away (in 2006). I still miss Tom dearly. He was a man who taught me so much about life.”

Following his stint at the ACC office, Forney spent a brief time at Georgia Tech and assisted head coach George O’Leary with the football program. This added another layer of experience before he made the decision to enter the corporate world. It was then that he began to see the world while continuing a never-ending quest for education and service.

Forney’s wife worked for General Electric when the decision was made to travel to another part of the world. They moved to Africa to be part of a new project that is still important today.

“When you look at GE, a good portion of its profits come from outside the country,” said Forney. “We were part of starting GE Africa. To be a part of that experience from the beginning was phenomenal.”

Forney was in Cape Town, South Africa when he thought about a conversation he had with Corrigan many years ago.

“I remembered what commissioner Corrigan had taught me years earlier,” said Forney. “He did not question that I knew how to win, but he was positioning me to win in life.”

The Forney family settled in Nigeria, and the transition was made easier by Forney’s time in athletics. The lessons learned on the field at Clemson and at the ACC office gave Forney experience to draw from.

“In football, it is about having the right people in the correct positions. It is the same in the corporate world. My previous life experiences at Clemson, the ACC and Georgia Tech have prepared me for what I’m doing now.”

When civil unrest began to increase, Forney and his family moved back to the United States in 2013. Never one to sit back and relax, he has been pursuing his doctorate degree. His dissertation involves corporate responsibility. He and his family reside in Atlanta, Ga., and he plays a key role in human resources for Home Depot, Humana and Target.

Late last year, Forney was contacted about winning the Brian Dawkins Lifetime Achievement Award. Even though a continent has separated him from Clemson at times, he has always kept a close eye on his alma mater.

“If anybody other than Dabo Swinney had told me I was chosen for this award, I would have thought someone was playing a bad joke on me.”

“It means so much to me because of the man Brian Dawkins is. Brian came to Clemson the year after I enrolled. How could you not notice the way he has handled himself, as a football player, man, husband and father? I don’t know if I should be considered for an award that has his name on it. To say I am humbled would be a tremendous understatement.

“I will say this…I did not get here alone. There are so many people who have helped me along the way…Les Herrin, Larry Van Der Heyden, Bill D’Andrea, Rick Stockstill, Byron Harder, Gary Wade, Jeff Davis, Margaret Humphreys, Jack Huss, Mike Mabry, Phil Luckadoo, Sam Metcalf…the list goes on and on.

Saturday’s game with Boston College will be the first he has seen in person in 2015, but the success Clemson has enjoyed has Forney beaming with pride.

“Coach Swinney is building a total person. I am so proud of what this program stands for. When you are around the young men on this football team, they shake your hand and look you in the eye. I could not be more proud of coach Swinney, his staff and the women behind those men. It takes a special spouse to support a coach.

“Whenever I am around this group, I feel a certain chemistry. Everyone is together, and that is a model for the young men on this team. There is a very tangible sense of the great character that is evident. I have no doubt the best days of Clemson football are ahead of us.”

As Forney receives the Brian Dawkins Lifetime Achievement Award, there may be some in the stands in Death Valley who are not be familiar with this prestigious award. But anyone who spends a moment with Forney knows it has to be a special person to be honored.