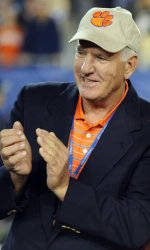 “Coach Ford is legendary in NCAA football history and certainly in the state of South Carolina,” Bauer said. “His accomplishments off the field are just as remarkable. He is a man who all South Carolinians should be proud to call one of our own.”

The Palmetto Patriot Program was established by Lieutenant Governor Bauer, and it recognizes individuals who have made outstanding contributions to their fellow citizens and the State of South Carolina. The Palmetto Patriot Award is given for one’s commitment to public service within their state and community. The award is the highest the Lieutenant Governor can bestow.