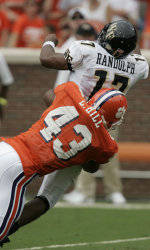 Clemson linebacker Leroy Hill was named the ACC’s Defensive Player of the Year, the conference announced on Friday. The senior had a team-high 106 tackles, including 19 for loss, and eight sacks to rank among the ACC and national leaders. He finished with 310 career tackles, 15th-most in Clemson history, despite starting only two seasons. Earlier in the week Hill was named to the All-ACC First Team.

“It feels great to receive this award. It’s the ultimate defensive award in the ACC and a big accomplishment, and I want to thank the voters,” Hill said. “I also want to thank Coach Lovett, the defensive staff, and all my teammates. We had great defensive linemen and defensive backs that allowed me to make a lot of plays.”