Some of the most well-known Clemson players over the years have been those who are vocal leaders. Some recent ones who come to mind include Ben Boulware, Christian Wilkins and Trevor Lawrence. Others may deliver similar production but do not receive quite the same adoration. They, instead, choose to lead by example.

His numbers from 2019 as a whole compare favorably to those of former Clemson defensive end Shaq Lawson in his penultimate season in 2014. That year, Lawson recorded 44 tackles, 11 tackles for loss, 3.5 sacks, five quarterback pressures, a caused fumble and blocked kick. Lawson was the No. 19 overall selection of the 2016 NFL draft and currently starts for the Miami Dolphins.

Foster’s totals for tackles for loss and quarterback pressures in 2019 were second on the team, only behind All-American Isaiah Simmons, who was the No. 8 overall pick of the 2020 NFL draft by the Arizona Cardinals.

Although Foster has not been able to take the field this season, his potential is still high, as his coaches have noted.

Defensive Ends Coach Lemanski Hall had high praise for him recently as well.

“He’s a guy who’s very dependable, not only to our football team, but to the players as well. He does so much off the field. As a football player, he’s developed and he’s steady. He’s a leader and he’s proven. I trust Justin.”

Whenever Foster returns, his coaches and teammates will be ready to see #35 back on the field. One teammate, fellow defensive end Regan Upshaw, described Foster’s mentality.

“He’s a tough, hard-working person. He’s not flashy, but he’ll do his job and is committed. He’s someone who is going to be very successful in life.”

Foster began playing football in third grade in order to spend time with his friends. While he played both offense and defense, Foster mainly stuck to the defensive side of the ball because he “enjoyed hitting people instead of getting hit.”

Clemson was his dream school after his sister attended, and after Swinney offered him in 10th grade (a rarity for the program), his decision was clear. While he considered other schools, the family atmosphere ultimately convinced Foster to give the Tigers his commitment. 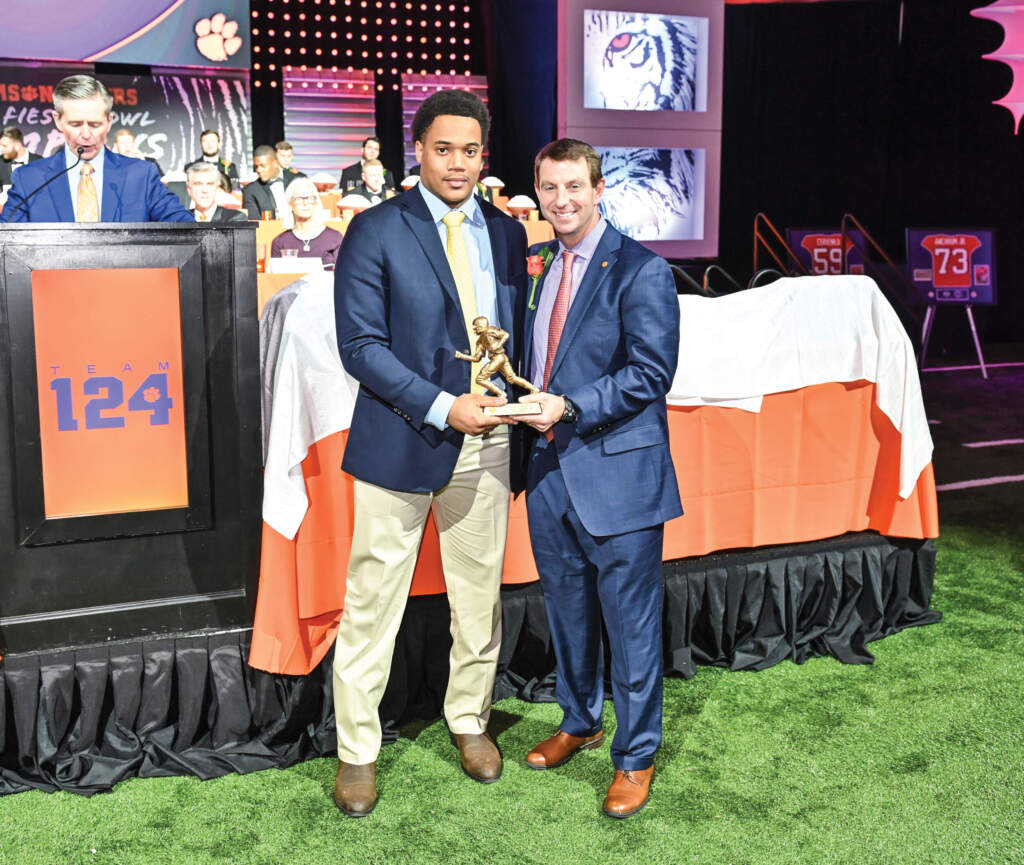 As to why he chooses to lead by example, Foster’s grandmother instilled those values in him at a young age. He hopes that if he exhibits admirable traits and commits to acting appropriately, others will follow.

Foster has taken freshman defensive end Myles Murphy under his wing, reminding him to stay humble and not to let outside noise affect him, no matter how much success comes his way. While Foster may not garner the same praise others have, his pride and self-worth has always been determined internally, and he hopes he can teach younger players to have a similar mindset.

Part of that mindset comes to him through P.A.W. Journey, of which he is an ambassador. P.A.W. Journey was established early by Swinney and Jeff Davis, current assistant athletic director for football player relations, the latter with which Foster has conversations often.

One of Foster’s favorite memories of P.A.W. Journey was the discussions surrounding the social issues in America, in which he took a vocal lead.

He spent his final three years of high school living with a different family due to difficult circumstances. This allowed him to offer a fresh perspective on the situations facing the country.

Outside of the football world, Foster enjoys spending his free time as a mechanic. Growing up on the racetrack grew his interest in vehicles, and while he never raced himself, watching his father race in the Pro Modified Series (division of the National Hot Rod Association (NHRA)) influenced him heavily.

These days, Foster is known by his teammates as “Mater,” courtesy of Matt Bockhorst. He has fielded several calls from his teammates requesting automotive help, chiefly among them offensive tackle Jackson Carman, whose polymathic traits do not include handy work.

On the academic side, Foster has always been driven to excel, or at least perform better than his twin sister. In 2019, he was named to the All-ACC Academic team and earned his second selection to the ACC Academic Honor Roll. He is currently studying construction science and has enjoyed his land surveying classes the most. After football, he hopes to become an entrepreneur in construction, mechanics or both.

When Foster leaves Clemson, he hopes to be remembered as someone who gave it his all every play and left everything on the field. He will remember Clemson as a true embodiment of family, where people often come up to him and get to know him outside of football as a person. He will remember the Clemson community as multifaceted, not just focused on football, and he hopes the Clemson fanbase will remember him the same way.