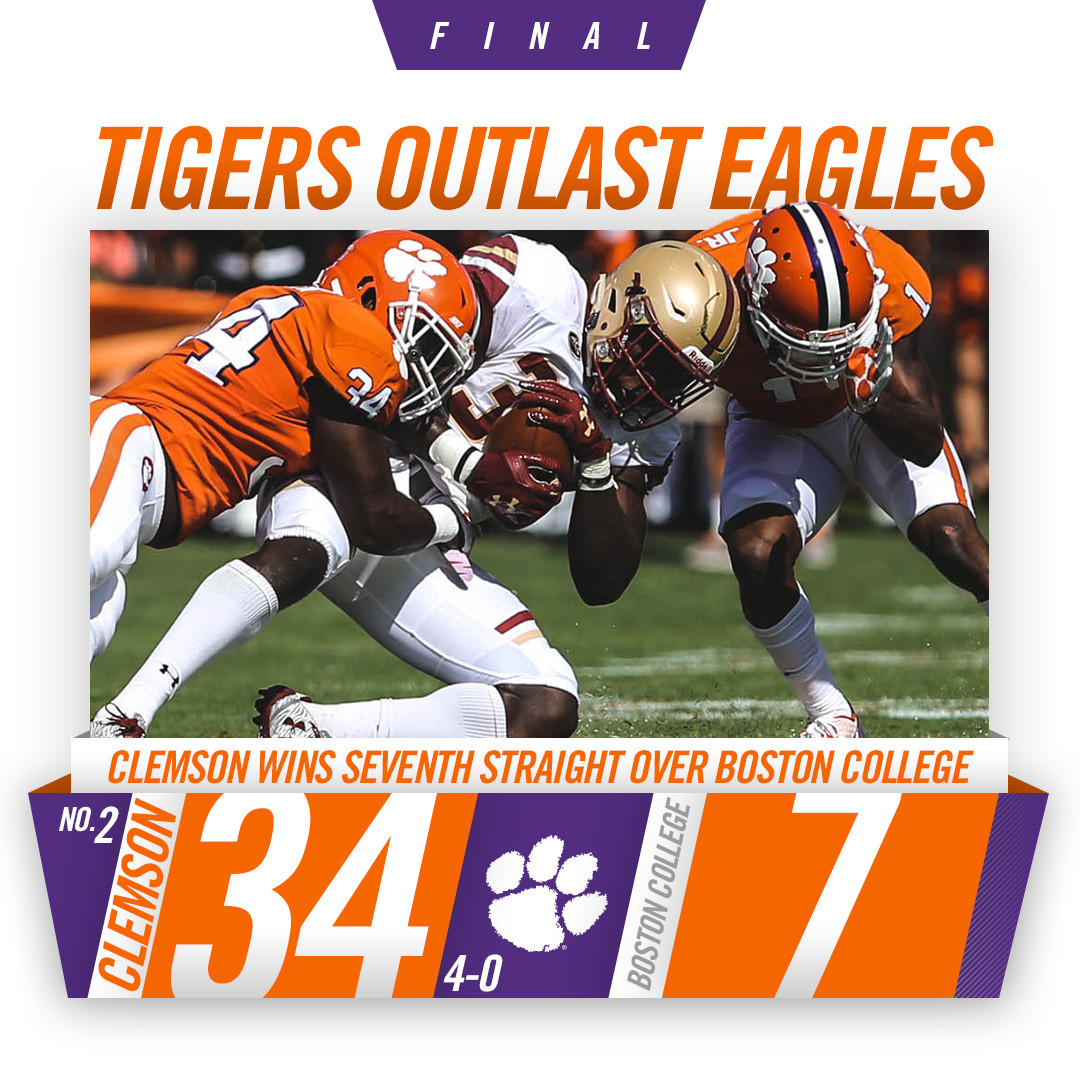 CLEMSON, S.C. – Four fourth-quarter touchdowns led the No. 2 Clemson Tigers to a 34-7 win over the Boston College Eagles on Saturday afternoon at Death Valley. With the win, Clemson remained undefeated at 4-0 overall and 2-0 in the ACC, while Boston College dropped to 1-3 on the year and 0-2 in conference play. The Tigers won the O’Rourke-McFadden Trophy, given to the winner of the game each season, for the seventh year in a row.

On offense, the Tigers were powered by the run game, as all five of their touchdowns came on foot. Kelly Bryant rushed for a career-high 106 yards and two touchdowns on 22 carries, and Travis Etienne, who ran for 113 yards and two touchdowns on nine carries, won the Leather Helmet Award as the game’s MVP. Defensively, Clemson was sparked by Trayvon Mullen and A.J. Terrell, who both hauled in their first career interceptions, and Kendall Joseph, who had 10 first-half tackles.

The Tigers struck first, breaking a scoreless tie midway through the second quarter on a 94-yard drive that was capped by a Bryant 11-yard touchdown run. That proved to be the only scoring of the first half, and Clemson took a 7-0 lead into the break. Boston College evened the score at 7-7 late in the third quarter when AJ Dillon ran in a one-yard touchdown, and the Tigers and Eagles entered the fourth quarter tied.

Clemson took the lead for good on its opening drive of the final quarter on a six-yard touchdown run by Adam Choice, set up by a 23-yard pass from Bryant to Diondre Overton on the previous play. An Etienne 50-yard rushing touchdown put Clemson up by 14 late in the fourth quarter, and Bryant scored on a four-yard quarterback keeper with just under three minutes left in the score. The Tiger offense was not done, however, as Terrell’s interception set up a 41-yard scoring drive that saw Etienne find the endzone on a 10-yard scoring run with less than a minute remaining in the contest.

Clemson will travel to Blacksburg, Va. for a matchup with the Virginia Tech Hokies next Saturday at 8 p.m.