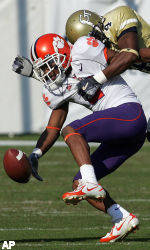 ATLANTA (AP) – P.J. Daniels rushed for 100 yards and scored the go-ahead touchdown midway through the fourth quarter to give Georgia Tech a 10-9 win over Clemson on Saturday.

The game was tied at 3 after three quarters as Clemson was hurt by three first-half fumbles.

Reggie Merriweather, who led Clemson with 128 yards rushing, ran 11 yards to the 6. But Tech’s defense held there, as Kenny Scott deflected a third-down pass from Charlie Whitehurst for Chansi Stuckey. Clemson (4-4 overall, 2-4 ACC) settled for Jad Dean’s third field goal, from 21 yards, to cut the lead to 10-9 with 5:36 left to play.

Tech was held without a first down, and a 32-yard punt by Ben Arndt gave Clemson the ball at its 48 with 3:30 left to play.

On fourth-and-8 from the Tech 38 with 2:11 left to play, Whitehurst completed a short pass to Curtis Baham, who was immediately hit by Scott after a gain of only 2.

Clemson got one more chance with the ball at its 41 with three seconds left, but Dawan Landry intercepted Whitehurst’s final pass.

Tech moved to within a win of qualifying for its ninth straight bowl bid.

Clemson had been the only Division I-A team without a lost fumble this season, but that streak ended in the first half. Two fumbles were lost by Whitehurst following sacks by Eric Henderson, who returned after missing four games with an ankle injury.

The first lost fumble, by Merriweather at the Tech 8, wasted a long drive on Clemson’s first possession. Merriweather fumbled when hit by Philip Wheeler, and Landry recovered.

Henderson’s first forced fumble by Whitehurst, recovered by Vance Walker, set up a missed 47-yard field goal attempt by Travis Bell, giving Bell six straight misses. Bell was good from 42 yards, but Tech was flagged for delay of game before the kick.

Tech’s first turnover came in the second quarter when freshman safety Michael Hemlin outjumped Johnson to intercept a pass from Ball at the Clemson 46. The Tigers drove to the Tech 19 to set up a 36-yard field goal by Dean, who earlier missed from 43 yards.

Bell snapped his drought with a 33-yard field goal.