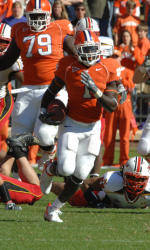 CLEMSON, S.C. (AP) -Dan Ennis kicked a 31-yard field goal as time ran out, lifting Maryland to its fourth straight victory, a 13-12 win over No. 19 Clemson on Saturday that kept the Terps alive in the Atlantic Coast Conference title race.

The Terps (7-2, 4-1 ACC) used the same blueprint as Virginia Tech to keep Clemson’s powerful running game in check. But it looked like it wouldn’t matter after Jad Dean kicked his fourth field goal with 2:25 left to put the Tigers (7-3, 4-3) ahead 12-10.

But Sam Hollenbach drove Maryland 54 yards to Clemson’s 12 – converting a fourth-and-inches with his sneak – to set up Ennis’ game winner.

The Terps jumped and hugged Ennis in celebration. They had a lot to be happy about – the victory keeps them in the mix to represent the league’s Atlantic Division in next month’s championship game.

Maryland came into the weekend tied in the division with No. 16 Boston College and No. 22 Wake Forest. It will remain up top with whoever wins the BC-Demon Deacon showdown Saturday night.

Maryland’s chances seemed slim after the Tigers got a key call overturned by the replay booth to help them take the lead.

Clemson trailed 10-9 midway through the final period when quarterback Will Proctor had the ball ripped from his hands at the end of a run near Clemson’s 10. Tailback C.J. Spiller chased the ball back to the goal line and slid into the end zone as he collected it. When Maryland linebacker David Holloway fell on Spiller, officials gave Maryland a safety.

But after a lengthy review, Spiller was ruled down on Clemson’s 1.

Clemson appeared to put the game away when James Davis rushed for a touchdown. That play, however, was nullified by an illegal procedure call and the Tigers settled for Dean’s final kick.

For the second straight week, Clemson’s powerful tailback tandem of Davis and Spiller was held in check. The two combined for 332 yards on the ground two weeks ago to beat Georgia Tech, a victory that lifted the Tigers into the top 10. In this one, Davis had 90 yards – he had a 42-yard run early in the game – and Spiller 41.

The Tigers had the country’s top scoring offense two weeks ago. But they have managed only 19 points in losses to Virginia Tech and Maryland.

Hollenbach led the Terps, completing 23 of 34 passes for 247 yards.

He hit on 11 straight throws during one stretch, including Maryland’s only touchdown play – a 7-yard scoring pass to Danny Oquendo.

Davis has rushed for 1,081 yards this season. He became the first Tiger running back with 1,000 yards since Travis Zachery did it in 2000.

The Terrapins dared Clemson’s Proctor to beat them through the air as Virginia Tech did a game earlier. Again Proctor couldn’t come through.

Despite opening the game with a 60-yard to pass to Chansi Stuckey, his longest completion the rest of the half was a 12-yard to Tyler Grisham.