Editor’s Note – This is the 150th season of college football. The author of this article, Tim Bourret, is one of 150 college football historians on a committee formed by ESPN that is selecting the top teams, games, players and programs during the first 150 years. In conjunction with that, Bourret is writing articles this year on the great moments in Clemson football history. Below is the first installment of the series.

Clemson played its first football game on Halloween Day in 1896. The Tigers beat Furman 12-6 in Greenville, and the program was off and running. The Tigers finished with a 2-1 record that first year and did not have a losing season in their first four years.

Walter Riggs, who came to Clemson from Auburn (its program started in 1892), was the head coach of Clemson’s first team in 1896 and fourth team in 1899. The 1899 squad posted a 4-2 record with losses only to Georgia and Auburn and shutout wins over South Carolina, NC State and Georgia Tech.

It was a good season, but Riggs wanted to spend more time in administration and soon became the president of the college. But before he left the coaching ranks, he was charged with finding his replacement.

Riggs was the modern-day version of an athletic director at Auburn in 1895, and he wrote to a friend, Carl Williams at Penn, for a recommendation. Williams told Riggs to hire John Heisman, who was Williams’ coach at Oberlin in the 1892 season. After Riggs found Heisman at a farm in Texas, where he was raising tomatoes, he convinced him to get back into coach at Auburn for the salary of $500 a year. 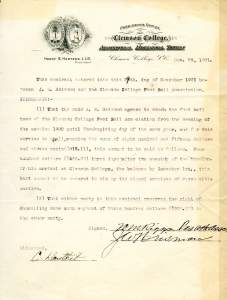 Fast forward to the 1899 season, and Heisman was coaching Auburn against Riggs’ Clemson team in Auburn’s 34-0 victory. When Riggs decided to go into administration, he asked Heisman if he was interested in replacing him as Clemson’s head coach.

The hiring of Heisman is certainly the most significant event of the first 25 years of Clemson football. Having Heisman as a part of Clemson’s football legacy is important because the name still carries great weight through the awarding of the Heisman Trophy.

But it is more than just the name that Heisman brought to Clemson. He showed in the program’s infancy that “it could be done at Clemson.”

Heisman posted a 19-3-2 record at Clemson, and that 83.3 winning percentage is still highest in school history. Heisman won three conference championships in his four years, the first three in school history. That includes a 6-0 record in his first year. 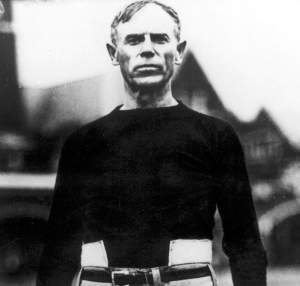 When Clemson closed another perfect season (15-0) in 2018 with a 44-16 win over top-ranked Alabama, it was Clemson’s largest margin of victory over the Crimson Tide since that win by Heisman in 1900.

Heisman was a great innovator who truly thought outside the box. There was the famous story of 1903, when he sent a bunch of Clemson students as football imposters to Atlanta the night before the game to carouse with Georgia Tech players, who thought these were the real Clemson players. They either got drunk with them or became overconfident after seeing them party most of the night. Clemson won the game  by a score of 73-0.

Heisman was an innovator in his private life as well. On Oct. 28, 1903, Heisman coached the Tigers to a 24-0 win over NC State in the morning, then married Evelyn Barksdale in the early evening. He is the only Clemson coach to win a game and win a lady’s hand in marriage on the same day.

The win over Georgia Tech and the marriage to Barksdale in 1903 proved to be moments that also changed the course of Clemson history. Georgia Tech used the same logic Clemson had used in hiring Heisman four years earlier. If you can’t beat them, have them become your coach.

The Yellow Jackets offered Heisman their head coaching position for the sum of $2,250 a year, plus 30 percent of the gate receipts. Barksdale, who had only been living in Clemson as Heisman’s wife for a month, made it known that she preferred to live in Atlanta. So, he accepted the Georgia Tech head coaching position on Nov. 26, 1903.