Editor’s Note – This is the 150th season of college football. The author of this article, Tim Bourret, is one of 150 college football historians on a committee formed by ESPN that is selecting the top teams, games, players and programs during the first 150 years. In conjunction with that, Bourret is writing articles this year on the great moments in Clemson football history. Below is the second installment of the series.

Clemson’s 6-3 victory over Boston College in the 1940 Cotton Bowl at the end of the 1939 season is a key moment in the school’s football history for many reasons. First, it was Clemson’s first bowl game. Second, it concluded Clemson’s first top-20 season (No. 12) in the AP poll. Third, the Tigers defeated a ranked team (No. 11) for the first time.

Jess Neely’s team finished the year with a 9-1 record, the first nine-win season in school history, with the only loss coming by a 7-6 score to a Tulane team that finished No. 5 in the AP poll.

The 1939 season was a landmark one in another area, because it featured the play of Banks McFadden, Clemson’s first AP All-American. McFadden was the consummate all-purpose player who threw passes, ran the ball, was a top defensive back, punted and returned kicks.

“That McFadden put a lot of these gray hairs on my head,” Head Coach Jess Neely told The Boston Globe prior to the Cotton Bowl. “I don’t discourage him any. He’s a smart tailback, and if he believes he has worked the team into a bad spot, he makes up for it. I like to see him get reckless.” 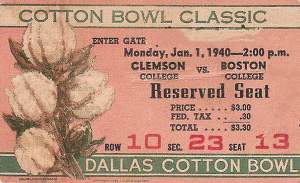 McFadden went both ways and was as much a factor on defense as he was as a runner, passer and kicker. Clemson’s defense that year gave up just 45 points in the 10 games, and no team scored over seven points against the Tigers all year, the only Clemson team since 1906 that can make that claim.

The Clemson vs. Boston College game on Jan. 1, 1940 was a classic defensive struggle of the era. The Eagles got on the scoreboard in the first quarter, when Charlie O’Rourke returned a punt 27 yards to the Tiger 13. Two running plays lost 10 yards and Alex Lukachik kicked a 34-yard field goal.

Clemson got on the scoreboard late in the first half. A 16-yard completion (16 of Clemson’s 35 passing yards on just four attempts in the game) from McFadden to Wistar Jackson took the Tigers across midfield. Charlie Timmons later ran the final 20 yards on three carries, and his two-yard run put the Tigers up 6-3, as Clemson missed the extra point.

The second half was a defensive struggle. Twice, Boston College drove inside Clemson’s 20. On the first opportunity, a holding penalty took Boston College from the Clemson 19 to the 29, and the Eagles had to punt. Then late in the game, the Eagles drove to the Clemson 11, but Shad Bryant and McFadden had two pass breakups apiece, and Clemson took over on downs. 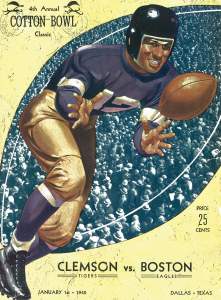 Timmons rushed for 115 yards and the game’s only touchdown, but it was McFadden who was named game MVP. Playing in his final game, McFadden had 33 rushing yards and 35 passing yards, but his punting was outstanding (12 punts for a 44-yard average), and he had four pass breakups, still a Clemson record for a bowl game. He was a big reason Boston College was just 4-23 passing and gained only 177 total yards.

As the years have gone on, the victory has become more and more impressive. Leahy coached one more year at Boston College before going to Notre Dame, his alma mater. He is still second in college football history in winning percentage, trailing only Knute Rockne. His four AP national titles trail only Nick Saban and Bear Bryant.

Leahy praised the Tigers after the game.

“Clemson is every bit as good as they are cracked up to be. We lost to a great team, one of the best I have ever seen. I have the satisfaction of knowing that while we were beaten, the game wasn’t lost on a fluke.”