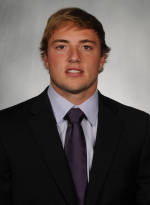 GREENSBORO, NC – Comeback is the common theme shared between this week’s list of Atlantic Coast Conference Players of the Week as five of six honorees helped their teams to come-from-behind wins in the fourth quarter. Wake Forest senior signal caller Riley Skinner headlines the list after guiding Wake Forest to the seventh comeback victory of his career and a record-setting day, along with Duke senior cornerback Leon Wright, who scored two defensive touchdowns in a 16-second span to help Duke overcome Army.

Georgia Tech junior defensive end Derrick Morgan and junior kicker Scott Blair made the most of their ESPN Thursday night game by holding off Clemson, 30-27, in a primetime classic that saw Clemson freshman quarterback Kyle Parker have the best rookie performance of the week.

ROOKIE – Kyle Parker, Clemson, QB, Fr., 6-0, 210, Jacksonville, Fla. (Bartram Trail) Clemson redshirt-freshman quarterback Kyle Parker became the second Tiger freshman to throw three touchdown passes in a single game in a near comeback against Georgia Tech, a 30-27 loss. Parker completed 15-of-31 passes for 261 yards and three touchdowns, including aerial strikes of 63 yards to C.J. Spiller and 77 yards to Jacoby Ford. After trailing 24-0 just five minutes into the second quarter, Parker led the Tiger offense to 27 unanswered points and a 27-24 Clemson lead, but another Player of the Week performance by Georgia Tech’s Scott Blair outlasted the Tigers.

OFFENSIVE BACK – Riley Skinner, Wake Forest, QB, Sr., 6-1, 210, Jacksonville, Fla. (The Bolles School) Wake Forest senior quarterback Riley Skinner engineered the seventh fourth-quarter game-winning drive of his career in a 24-17 win against Stanford. Skinner completed 18-of-26 passes for 187 yards and a touchdown; ran for 21 yards on four carries; and caught one pass for 20 yards. With the Demon Deacons trailing, 17-10, in the fourth quarter, Skinner found teammate Jordan Williams for a nine-yard touchdown pass to cap a 14-play and 73-yard drive to tie the game, 17-17. Then, with 3:49 to play and 91 yards away from the endzone, Skinner led the Deacs downfield by completing all four of his passes on the drive for 65 yards and scored on a one-yard run to give Wake the win. With his 18 completions, Skinner now has 677 in his career, the most in Wake Forest history.

OFFENSIVE LINEMAN – Caz Piurowski, Florida State, TE, Sr., 6-7, 267, Land `O Lakes, Fla. (Land `O Lakes) Florida State senior tight end Caz Piurowski hauled in two passes for a career-high 78 yards, including a 53-yard catch that led to Florida State’s first touchdown of the game in a 19-9 win against Jacksonville State. The 53-yarder was the longest reception for a Seminole tight end since Lonnie Johnson’s 78-yard touchdown reception against Clemson in 1993. Piurowski also helped anchor a line that led the Seminole offense to more than 400 yards for the second straight game.

DEFENSIVE BACK – Leon Wright, Duke, CB, Sr., 5-8, 175, St. Petersburg, Fla. (Northeast) Duke senior cornerback Leon Wright had one of the best defensive games nationally on Saturday as he returned two interceptions for touchdowns, recovered a fumble, and tallied four tackles in Duke’s 35-19 come-from-behind win against Army. With Duke clinging to a 21-13 fourth-quarter lead and Army with the ball with just 1:48 remaining, Wright picked off a pass and returned it 51 yards – the 15th longest return in school history – for the score and a Duke win. Adding insult to injury, Wright intercepted another pass on Army’s next offensive play and took it 33 yards downfield for his second defensive touchdown of the afternoon and third of his career, which places him in a tie for first in Duke history.

SPECIALIST – Scott Blair, Georgia Tech, K, Jr., 6-0, 198, Calhoun, Ga. (Calhoun) Georgia Tech junior kicker Scott Blair converted a game-tying and game-winning field goal in the fourth quarter to cap a come-from-behind win for the 15th-ranked Yellow Jackets over Clemson, 30-27. After the Tigers scored 27 unanswered points to take a 27-24 lead early in the fourth quarter, Blair tied the game with a 34-yard field goal to cap a 12-play and 69-yard drive, then sealed the win with his game-winning 36-yarder. Blair also kicked a 24-yarder in the second quarter, converted all three of his point-after-touchdown tries, and even threw a touchdown pass to teammate Demaryius Thomas in the first quarter.