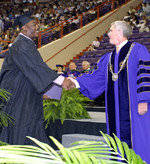 Kirkland was a three-time All-ACC selection and a two-time All-American at Clemson during his career that spanned 1988-91. He is the only football player in Clemson history to be a semifinalist for the Lombardi Award and the Butkus Award over the course of his career.

Clemson won the ACC Championship his freshman and senior seasons and never lost more than two games in any of the four years he played. Clemson was ranked in the final top 20 of the AP poll all four of his seasons at Clemson and was named the MVP of the 1989 Gator Bowl victory over West Virginia.

“This is special,” said Kirkland. “This is something I’ve always thought about doing since I went to college back here in 1987. I played in the (NFL) league for 11 years, and had a wonderful time doing that, but this means more than anything I’ve ever done in football.”

Kirkland went on to an 11-year NFL career with the Pittsburgh Steelers (10 years) and the Philadelphia Eagles (one year) before he retired prior to the 2003 season. An All-Pro selection in 1996 and 1997, he was inducted into the Clemson Athletic Hall of Fame in 2001.