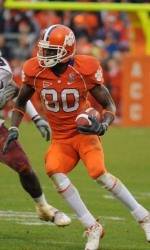 Clemson, SC — Former Clemson All-ACC receiver Aaron Kelly will play in the East-West Shrine Game at Robertson Stadium in Houston, TX on Saturday. The game will be televised by ESPN2 and will start at 4:00 PM EST.

Kelly finished his Clemson career as the ACC’s career reception leader with 232 catches. That included six catches for 74 yards and a touchdown in his final game against Nebraska in the Konica Minolta Gator Bowl.