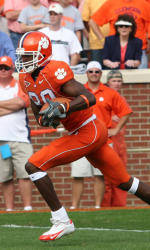 Clemson, SC- Clemson rising sophomore Aaron Kelly, Clemson’s second leading receiver in 2005, suffered a knee injury in practice on Friday. Kelly suffered the injury during a drill when he was making a cut. He was not hit by an opposing player.

Clemson Head Athletic Trainer Danny Poole said Kelly’s injury is not believed to be serious. He will have an MRI on Saturday and will meet with Clemson doctors and trainers for further evaluation. Kelly is not expected to play in Saturday’s scrimmage in Death Valley. His status for the remainder of spring practice will be determined tomorrow after the MRI.

Kelly had 47 receptions for 575 yards and two touchdowns to rank second on receptions and reception yards to top receiver Chansi Stuckey. Kelly’s totals were second in Clemson history among freshmen behind Derrick Hamilton (2001). Kelly ranked third on the team in all-purpose yardages last year when he had 849. he also led the Tigers in kickoff return yardage (266) and average (26.6) as a freshman.