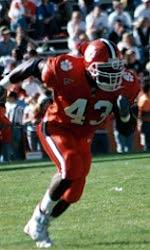 GREENVILLE, S.C. – Clemson All-America linebacker Keith Adams will receive the Banks McFadden Trophy from the Greenville Touchdown Club at the organization’s season ending banquet on February 21st. The honor is presented to the top college football player in the state of South Carolina.

The event will be held at 7:00 PM at the Embassy Suites Hotel on Verdae Boulevard in Greenville. Tickets to the event are priced at $20 and are available by contacting Jack Coggins, Greenville Touchdown Club President, at (864) 244-0897.

Adams is the third Clemson player to win the award that is named after the former Clemson All-American (1939). Terry Smith won the honor in 1993, while Anthony Simmons won the award in 1996 and 1997.

Adams led the nation in tackles with a Clemson record 186. He led the nation in tackles for loss with 35, also an all-time Clemson record. The son of former NFL great Julius Adams set a school record for sacks in a season with 16, and set a school mark for tackles in one game with an incredible 27 stops at South Carolina. For his efforts he was named the ACC Defensive Player of the Year and first-team All-American as a sophomore.

On December 30th he added to his incredible totals with 10 tackles, including two for loss and a record tying seven quarterback pressures against Mississippi State. For his efforts he was named the Defensive Player of the Game in the Peach Bowl.