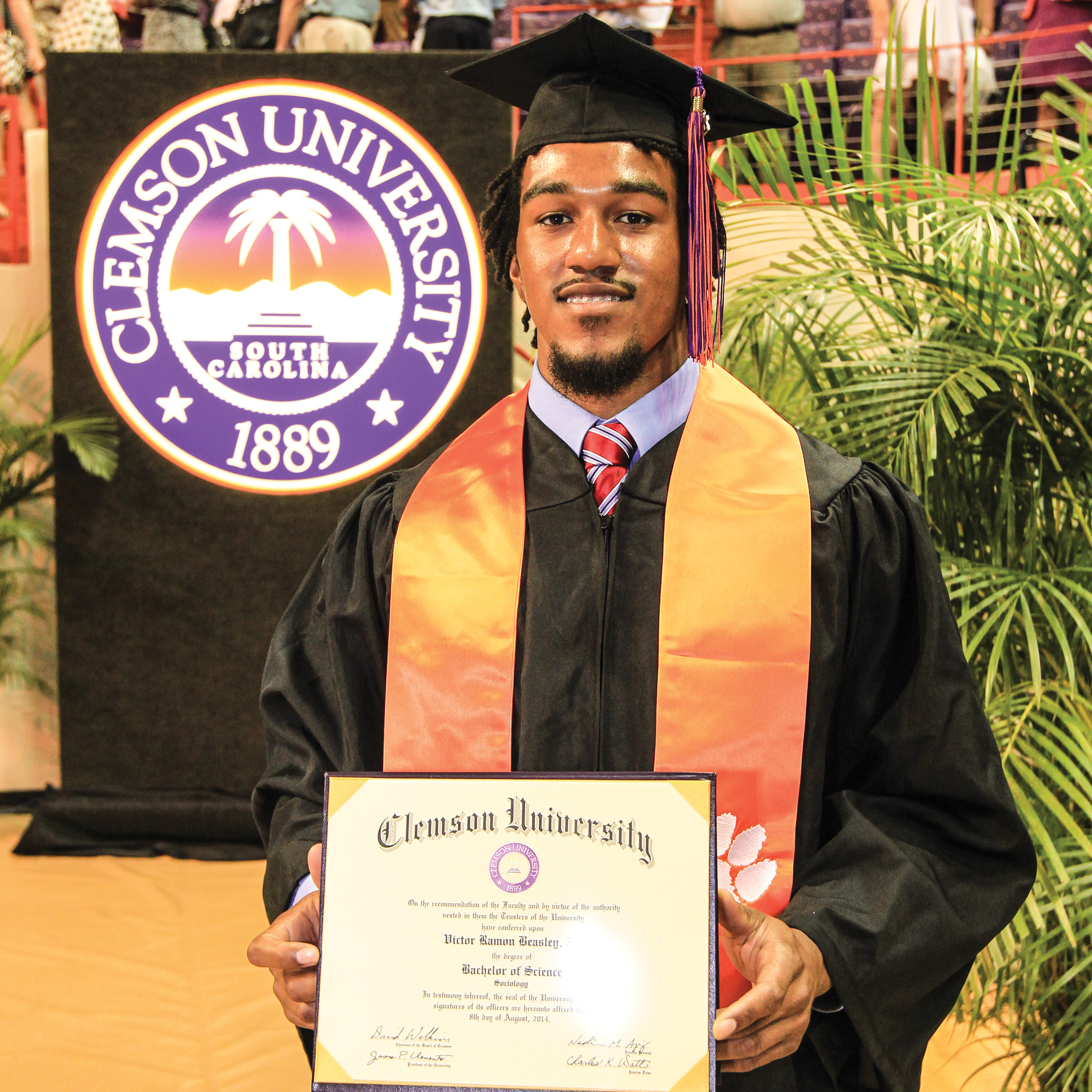 When his playing days are done and he has nothing left to offer the game of football, Vic Beasley hopes to go to dental school. When asked why, he gave a simple yet fitting answer.

Beasley has put smiles on all of the Clemson faithful during his record-setting career as a Tiger. It is not the sacks and tackles for loss that have given Clemson fans the biggest grin from ear to ear, but rather a decision in January that showed the commitment Beasley made to his family, his football program and his university.

Twelve days after leading the Tigers with four tackles for loss in a 40-35 Orange Bowl victory over No. 6 Ohio State, the consensus All-America defensive end announced he was returning to Clemson for his senior season.

His reasons for returning came down to two factors – earning his undergraduate degree and improving his stock for the NFL draft.

“No one in my family has a degree and I wanted to be the first to accomplish that,” said Beasley, the youngest of seven children.

Beasley, who is also an avid piano player, was able to put a big check next to the first goal in August when he walked across the stage in Littlejohn Coliseum to accept his sociology degree from President Jim Clements.

And the second goal? Well, Beasley is well on his way to doing just that.

He entered his senior season as the nation’s active leader in sacks with 21 and has shown no signs of slowing down. Beasley has posted at least one sack in each of the Tigers’ first five games, with two apiece against No. 1 Florida State and North Carolina. He is tied for third in the nation in sacks (7).

“I feel honored to be amongst those names,” he said. “Those are two of the greatest players to come through Clemson University, and I’ll feel a great sense of accomplishment when I reach that goal.”

The fact Beasley is even in this position is a testament to patience and hard work. A highly-recruited player out of Adairsville High School in Northwest Georgia, football was not his biggest passion.

Beasley enjoyed a standout basketball career and was a member of the famed Georgia Stars AAU organization that sent Tanner Smith and Jaron Blossomgame to Clemson. To this day, he still maintains basketball is his favorite sport.

But beyond Beasley’s love of the game of basketball, recruiters everywhere had trouble determining his best fit on the gridiron. At Adairsville High School, Beasley was a running back and linebacker, and he even returned punts and kickoffs.

“I had a lot of schools recruiting me for different positions,” said Beasley. “I was told I could play running back, linebacker or defensive end.”

He doesn’t remember the exact game he took his official visit to Clemson, but Beasley remembers what made the Tiger program stand out during the trip.

“I was supposed to go to Alabama but took an official visit here instead,” he said. “I loved the gameday atmosphere, and it just felt like home.”

It felt like home, but it took a full year and then some for Beasley to find an actual home as a player. He began his career as a tight end, practicing with the likes of current Indianapolis Colts starter Dwayne Allen while earning a redshirt in 2010. From there, he spent three or four months at linebacker.

Heading into fall camp as a redshirt freshman, coaches put Beasley at defensive end. He appeared in nine games, primarily as a special teams player. He logged just 16 snaps on defense.

“I was a little discouraged here and there,” admitted Beasley. “I knew with patience, the hard work would eventually pay off.”

It started to yield returns during his sophomore season in 2012. Still a reserve, he logged 288 snaps and made the most of his opportunities. Beasley posted a team-high eight sacks, including one on Auburn’s final drive of the season opener that helped the ACC Tigers to a 26-19 victory in the Georgia Dome. It was a moment to remember for Beasley, whose father, Victor, played at Auburn from 1982-84.

It was during his sophomore season that Beasley’s confidence grew as a player.

“That’s when my confidence really grew,” he said. “I knew if I could do it as a backup, I could progress and do better as a starter.”

Big things were expected of Beasley in 2013, and #3 did not disappoint. He set the tone with a two-sack performance in Clemson’s 38-35 win over No. 5 Georgia in the opener.

Two games later, he posted three sacks, two pass breakups and a caused fumble at NC State and was named Bednarik Award National Defensive Player-of-the-Week. In a win over Boston College, Beasley earned the Leather Helmet Award as the Tigers’ top player with two tackles for loss and a fumble return for a touchdown.

Beasley’s junior campaign ended with a bang as well. At South Carolina, a game largely controlled by Clemson’s stout defensive front, he contributed two sacks. That led into the aforementioned Orange Bowl performance.

After amassing 13 sacks and 23 tackles for loss as one of six finalists for the Ted Hendricks Award, many national pundits were convinced Beasley would forgo his senior season. The decision came down to the wire, as it was announced January 15, the deadline for underclassmen to declare early entry into the NFL draft.

Only three 2013 consensus All-Americans returned to school this year (Ty Montgomery of Stanford and Jameis Winston of Florida State are the others), and Beasley was one of them. He has no regrets over his decision to return and takes great pride in all the Tigers have accomplished during his time at Clemson.

“It’s meant a lot,” stated Beasley. “Clemson has always had premier talent but couldn’t quite get over the hump. I’m glad to be a part of this every day, being able to influence others around me. I’ve tried to give my best every day, because I know younger players are watching. I go out with a positive attitude and try and set an example.”

The soft-spoken Beasley has certainly done that. It is one of the things his coaches admire most for one of the most respected players in Clemson’s locker room.

“Vic Beasley didn’t come back to school to be average,” said Head Coach Dabo Swinney. “He came back to do something special.”

He came back to put smiles on the faces of Clemson fans everywhere.