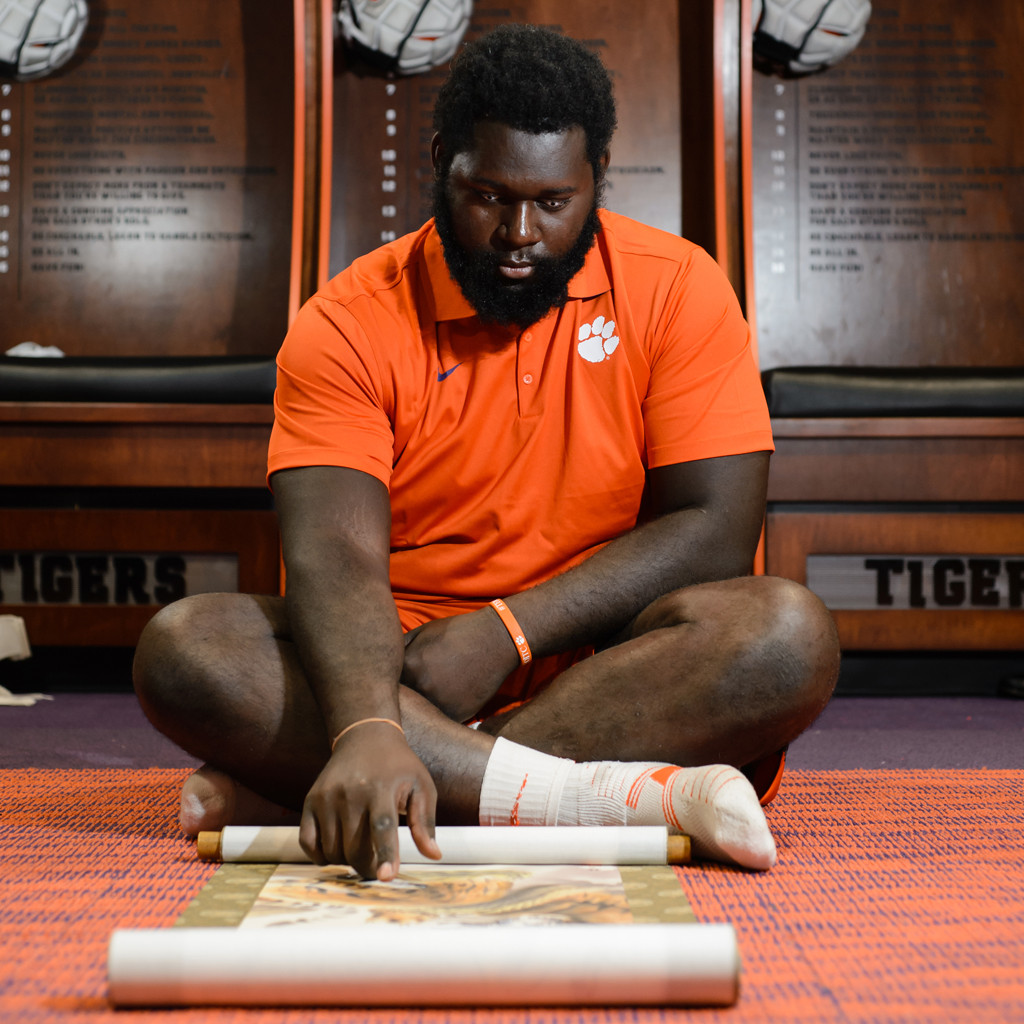 While many Clemson students were moseying beaches, returning to hometowns or simply kicking back this past summer, offensive lineman Kalon Davis wasn’t even in the United States.

Instead, Davis, a redshirt senior majoring in modern languages, spent eight weeks studying abroad in Japan’s ancient capital of Kyoto and touring numerous other parts of the country.

Though he was able to avoid culture shock, Davis conceded there was an adjustment period in his transition to a virtually new life over 7,000 miles away from Clemson. In the end, though, he called his unforgettable experience “a blast.”

“I really enjoyed it,” Davis said. “Everything about it was great. The only thing I was actually even worried about was the public transportation.”

That actually turned out to be a slight issue for the hulking 6-foot-5, 340-pound figure. Without a personal vehicle to take to class each day, Davis was forced to cram onto a bus with people of Japan who dwarfed in comparison — that is, until the crafty football player audibled his approach.

“I don’t know if you’re really supposed to, but I noticed something after about a month,” Davis said. “There’s actually another bus that follows it which is the same bus, so I think a lot of people got on me for going on it, but I would see the bus — ‘Oh, there’s a lot of people. I’m not going to get on this one, I’m just going to get on the one behind it,’ and there would only be a couple of people on there.”

Eyes of others were glued to Davis not only because he towered above them, but because of his own eyes.

Breaking out contacts during spring practice which give Davis’ eyes a bright blue appearance resembling that of a werewolf, head coach Dabo Swinney joked about hoping his player would decide to leave the contacts behind for his trip.

He didn’t, and Davis said his contacts were quite the conversation-starter.

“When I got there, I didn’t want to wear them, especially since I was with my host family, and their little daughter who turned 11 while I was there,” Davis said, “but when I first got there everyone was staring at me, but nobody would ever say anything — they would just like look at me.

“Since everyone was staring at me anyway, I figured I might as well go ahead and put them in. I put them in to show the football team one day, and then after a couple of days, I started wearing them 24/7. I actually had more people walk up to me and talk to me after I put them in.”

Resolving those matters, Davis was able to embark on eventful days that usually lasted from morning time to 9 or 10 at night.

Davis’ typical day began with breakfast in the home of the host family he lived with, from where he went to one of his two classes on Japanese language or Japanese culture depending on his schedule. One of his classes started in the morning on Mondays and the other in the afternoon from 1:30-4 on Tuesdays through Fridays. After an hour and a half bus and train ride following his class, Davis worked out on the campus of Ritsumeikan University with a Panthers program that has won three national championships.

Though Davis couldn’t participate in scrimmages, he was able to help coach the team and offer football intelligence acquired from three years of experience at the Division I level.

Gearing up when scrimmages subsided, Davis participated in the Panthers’ version of mat drills and a workout similar to Clemson’s “All In” drills.

Communication is of utmost importance along an offensive line in football, but Davis didn’t have trouble speaking to other players in a foreign country. In fact, he said anyone fluent in football jargon could watch and comprehend the practices.

“A lot of their plays, formations and pretty much the general football stuff were all in English,” Davis said, “but their plays were like half and half. I worked out with them, and I could do individual stuff, so it was generally like that. But if you were there watching, you’d understand what they were saying for the most part.”

On the practice fields, a lapse in communication up front likely means a five-yard false-start penalty or reprimanding from coaches. In everyday life in Japan, however, errors in language means hindrance to the handling of everyday tasks.

“I think the biggest difference is when you’re in class over here (at Clemson) and you enter a panic mode, you can just Google Translate a certain phrase or talk to a friend,” Davis said. “But over there, all of us had different host families, and I’m not seeing them other than class.

“If you get in a panic, you still have to use your Japanese because for the most part, they don’t understand English. Eventually you’re going to have to figure out a way to communicate because if you don’t, you’re pretty much screwed.”

When Davis wasn’t in the classroom, with his host family or working out, the Japanese culture he saw in textbooks at Clemson sprung to life as he and fellow students viewed the country on a rural pastoral tour that took them to “as many places” across the land that time permitted.

Davis also attended a concert at Japan’s famous Gardens Tokyo area with a couple of his friends during free time, and it was aspects such as this that made Davis feel at home in an otherworldly place.

Back in Tigertown for his last go-round at Clemson, Davis spoke with confidence when asked if he plans to return to Japan.

“I’ll definitely take trips,” Davis said. “I think it’s just more of a question of do I want to live there or not.”

The prospect of calling Japan home became even more prevalent during Davis’ successful two months there, as he was offered a job to become a fitness trainer for children between the ages of 3 to 15, who are eventually thrust into society on their own much earlier than kids in America.

“If you go over there, you’ll understand because when you’re turning 5 or 6, you’re going to school by yourself,” Davis said. “I’ve seen 7- or 8-year-olds on the subway by themselves, so basically everyone is physically fit at that age because you’re either biking, walking to class or doing whatever it takes.”

The opportunity for Davis to prepare those kids has come knocking, and it’s up to him to decide his calling as a professional.

Regardless of what he chooses, his memorable first connection with Japan will prove fruitful wherever his background in modern languages leads his future.

“I know my mom doesn’t want me to move over there,” Davis said, “so I’m just a little torn about it. I’ll see what happens.”