If the commonly used phrase, “A Clemson man needs no introduction,” needed an ambassador, look no further than K.J. Henry, who represents the program and university well on and off the field and is the true definition of a Clemson gentleman.

Henry has been a key player on the Tigers’ stellar defense in 2021, but his leadership attributes are what separates him from the rest of the pack.

As a prep standout, Henry was rated as the No. 6 player in the nation by ESPN. He was also an Under Armour All-American in 2017. Henry, like Paul, showed promise on the hardwood, where he scored 1,156 career points during his high school career.

Henry has blossomed into a leadership role for the Tigers this season. After the Florida State game, sophomore defensive end Myles Murphy was asked who among the defensive linemen is the leader of the group. Murphy was quick to answer, “K.J. Henry.”

“I would say that I always talk too much…been that way since I was a kid. I started to use it as a gift of mine. In a selfish manner, if I hold others accountable, then I have to hold myself to that same standard. That is why I try to raise the bar for the whole group, and they are an easy group to lead.

Henry has been around at Clemson to see some talented players come through and leave their mark on the program, not just as players, but as leaders. He takes aspects from many players’ leadership styles and molds them into his own.

“Austin Bryant was a really good leader, and so was K’Von Wallace. James Skalski is a great leader…he talks to everyone and gets them lined up and does what he has to do. I am going to pull a guy to the side and have that one-on-one conversation and let him know why we are doing something and how it is going to make us better as a unit.

Henry, as a leader of a top defensive unit in the country, loves the opportunity he has to play for one of the best defensive coordinators in the country in Brent Venables.

“As I have grown through the process, playing for ‘Coach V’ is like cramming for a test the night before you have it. You are so stressed and you are trying to get all the work done, but you put in that work, and on the day you have the test, you feel so free and you know what you are doing.

“That is how I feel with ‘Coach V.’ He loves us so much and he shows his love by trying to stress us out and give us all the factors and things that we may see in the game to keep us as sharp as possible. Then on gameday, we see probably about 20 percent of what we have seen in practice. He wants us to be great in all aspects of life.”

When asked about what it is like playing for Head Coach Dabo Swinney, Henry had high praise for the two-time national championship coach.

“Playing for Coach Swinney is easy…he just wants you to be your best. I had to learn being around a lot of great players early that comparing myself to others was not going to help my journey. He challenged me to be the best I can be and he has seen that through me as I have come up through the program.

“Being around him as a person, I get asked, ‘Is Coach Swinney really like what he is on television?’ He definitely is…he is that God-fearing man and he is a great man. I can see my 30-year-old self wanting to hug him around his neck and say ‘thank you’ for all he has done for me. Just like any other coach, he will get into you if you are not getting the job done. I love the accountability he brings. He is the best decision I have made.”

Henry not only is stellar on the gridiron, but he gets the job done in the classroom as well. Henry graduated in December in only three years with a degree in sports communication. He is a two-time ACC Academic Honor Roll member and completed a micro-internship with Bunty in 2018. He is also heavily involved with P.A.W. Journey.

“P.A.W. Journey was really one of the big reasons why I came to Clemson. It sets Clemson apart from a lot of programs. It has helped me grow as a leader and has helped me identify what I want to do in the future.”

When football is eventually over for Henry, he either wants to get into coaching or sports broadcasting.

“My father was a coach. I saw him pour into young men who want to pursue their dreams and stay in sports, and it would be awesome to do the same. If that does not work out, then hopefully I can get into sports broadcasting.

“I love talking and being around sports. With my beautiful face on TV, talking sports would not be too bad.” 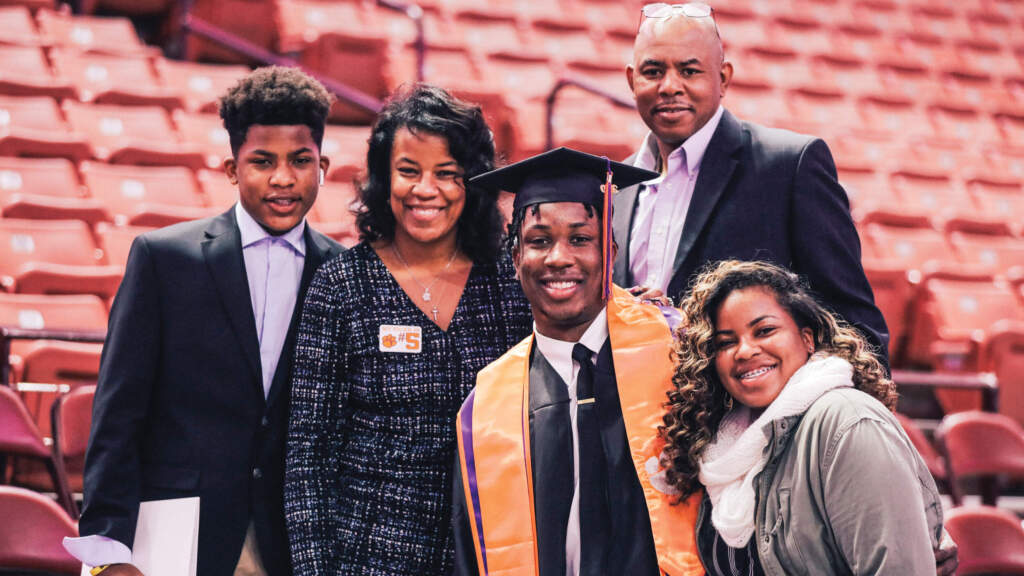