Justyn Ross – The Long Road Back

Clemson leading returning wide receiver out for the 2020 season.” That headline ran across major sports media outlets during the summer of 2020.

Justyn Ross, who had 112 receptions for 1,865 yards and 17 touchdowns in 29 games in 2018 and 2019, missed the entirety of the 2020 season due to a congenital fusion condition of his neck and spine that ultimately required surgery.

What was thought to be just a minor stinger injury in the spring turned into much more for Ross and the Tiger offense. While he may be shining amongst the receiving corps now, the days were not always bright.

“The whole process was tough. Trying to get through it was definitely a challenge, but I made it back and I am glad to know that I am good now.”

Since his return, Ross has been a staple for the offense. Since hauling in his first reception of the season in his first game action in 600 days against Georgia, Ross has continued to excel on the gridiron, becoming just the 16th player in school history to exceed 2,000 career receiving yards and joining an elite group of Tigers with at least 20 career receiving touchdowns.

Returning from an injury as extensive and rare as his, one can imagine the discipline and drive one must encompass in order to overcome such obstacles, and conquering them dominantly at that. When asked where his discipline comes from, he had a quick and clear answer. Charay Franklin, Ross’ mother, has served in the military with both the Navy and Alabama National Guard along with completing deployments to Afghanistan and Kuwait.

“It is so special to have a mom being in the military, especially being a single mother. It brought a lot of discipline to me and taught me how to hold my own.”

Among others who have played a significant role in the life of Ross are the coaching staff and teammates who surround Clemson football.

“The experience that I have been able to have and the people around have been so good to me.”

During his battle with the unique neck injury, Head Coach Dabo Swinney confidently and consistently expressed his support of and belief in his talented wide receiver.

“He has grown tremendously through the process…we all do when we go through adverse situations. It either defines us and destroys us or it develops us.”

Ross was able to utilize the situation to his eventual benefit, allowing it to not hold him back, but instead, it allowed him to flourish.

“Clemson football has definitely helped to mature me throughout everything that I have been through while here. This program has really helped shape me into the person that I want to be.”

No matter where you come from, how long you have played or what side of the ball you play on, all players on the Tiger team take immense pride in their membership within such a prestigious program. According to Ross, one of the most special parts about being a Clemson wide receiver is the ability to wear the Tiger Paw.

“It means a lot to me to be able to call myself a Tiger. It is extremely special to wear that Paw. If you get to wear the Paw, it means you are a very special person, and we all take it to heart.”

As Ross nears the end of the 2021 regular season, he strives to ensure that he gives it his all, both on and off the field. Whether in the locker room, in study hall or somewhere off campus, you can find Ross with the teammates whom he has grown closest to.

While he will likely be remembered by Clemson fans as the elite wideout with a comeback story within a program that relied on him, he hopes to be remembered in another light as well.

“I want my teammates to know that I was there for them and am always there for them, and that I gave it everything I had each and every day. To be on this team and them have me as a big part of this program…it means a lot to me.”

While his journey may not have gone the way he had originally foreseen, it is clear that throughout his time as a Tiger, he has made the Clemson Family proud. With only three regular-season games remaining, one should be on the lookout for the standout wide receiver to continue to make plays, often when it matters most.

As an early-round prospect, it will be interesting to watch Ross’ future unfold. While it may be a miracle that he has been able to catch passes in Death Valley this year, he has made it known that he belongs, regardless of the odds that may have been stacked against him. 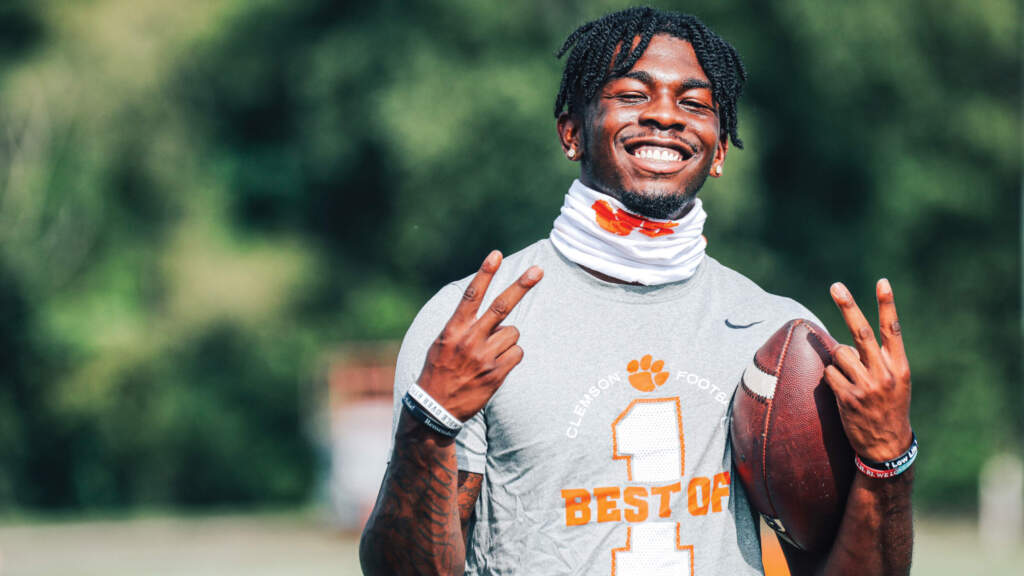