Perception is reality. But is it always? When it comes to Clemson senior wide receiver Joseph Ngata, that is not necessarily the case.

Ngata, who stands 6’3” and weighs 215 pounds, would seem to be all about football, all the time. That could be expected from a top-rated wide receiver playing for a program annually in the College Football Playoff conversation, especially if that player has aspirations of playing professionally.

However, Ngata is not just any regular standout player.

Ngata came to Clemson after a exceptional high school career in Folsom, Calif. He was rated as the No. 4 overall player in the state by one publication. He led his team to the state championship game each of his final two years, winning the title in 2018.

Grounded by the lessons taught to him by his parents before he arrived at Clemson, Ngata has always understood the importance of giving back and helping others whenever possible.

He may be one of the most soft-spoken people on the team, and furthermore, he also has one of the biggest hearts. You have to pay close attention and listen to every word he says, because he speaks so softly with a gentle voice.

“Gentle” and “kind” might not be words that spring to mind when it comes to football, but they are the words some think of when they hear his name.

During the summer, Ngata organized Joseph Ngata’s Clemmy Scavenger Hunt for area youth. Along with some of his teammates, Ngata compiled six “swag” bags, which were then hidden across the campus. Through following a set of clues, the children in attendance were able to participate.

“I have a passion for helping kids and helping develop them, and I believe if you show kindness and love, it can start a ripple effect in this world. If you inspire one kid, then they can inspire someone else, and so on. That was on my heart, and I believe it was the best thing to do at the moment.”

In addition, the scavenger hunt was a way to give back to the community that has given so much to Ngata and the Tiger program.

With aspirations of playing professionally, Ngata understands that not everyone may have the opportunity to play at the next level. Yet he continues to work to achieve that goal and knows that each day he has the opportunity to go out and play.

“Not everyone gets to wake up every day, so I’m blessed to have this opportunity to be here. My family plays a big role in my ‘why,’ and I want to go all out for my family name. I am blessed.”

Ngata also mentioned the importance of living up to his last name, and he cited Pro Football Hall of Fame quarterback Steve Young, who spoke to the team two years ago and asked each player listening to find his “why.”

Ngata’s early years at Clemson were hampered by injuries, but 2022 could be the year he breaks out.

“I have a ton of confidence in Ngata,” said Offensive Coordinator Brandon Streeter. “He did a great job during camp and worked extremely hard. He only knows one speed, and it’s 100 percent. That is what I love about him. He overcame some stuff last year mentally with injuries, but he is in a great spot, and I feel good about where he is today.”

Despite being affected by injuries last season (he only saw action in nine games and started eight games), Ngata still finished the season with two 100-yard receiving games and 23 catches for 438 yards along with one touchdown. Against Boston College, Ngata gave a glimpse of how good he can be for the Tigers with four receptions for 111 yards. He also had 110 receiving yards against the eventual national champion, Georgia.

“I just want to help this team win…lots of yards…lots of touchdowns…lots of blocks and celebrations and wins. For my last year, I want to make sure I go out the right way.”

Time will tell just how good he will be for the Tigers in 2022. 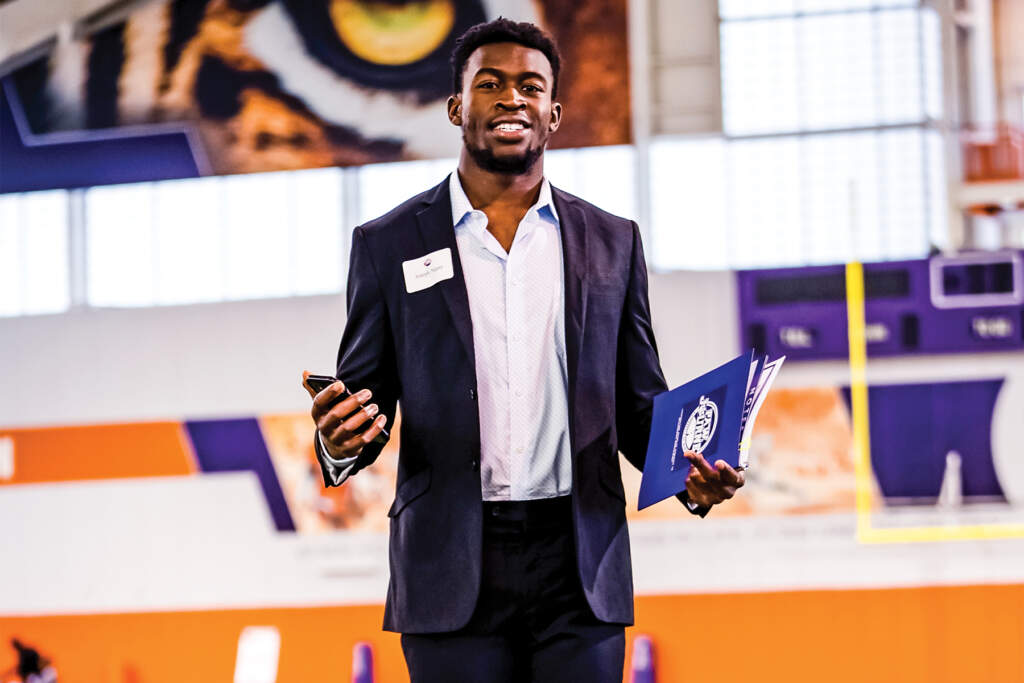