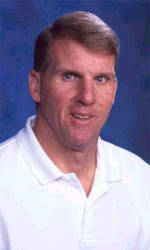 Lovett has been an assistant coach at the college level for 23 years, including 13 seasons as a defensive coordinator. He has experience working with all levels of the defense, but has spent most of his seasons in the game coaching the secondary and linebacker positions.

“John has a wealth of experience coaching all aspects of defense,” said Head Coach Tommy Bowden. “When you look at Auburn’s win over Florida and what they were able to do with Florida’s offense it certainly catches your eye. No defense held the Gators in check like John’s did this past year. The 2000 Auburn defense was ranked among the best in the nation and led the SEC in total defense at the end of that regular season. His defense was a big reason they won the Western Division of the SEC that year.

“I first saw John Lovett’s defense at work when I coached at Tulane in 1997 when he was at Mississippi. His defensive backs were impressive. That was our only loss at Tulane over the last 15 games. We are pleased to have John and his wife Carol join us at Clemson.”

Lovett helped Auburn to bowl games each of the last two years. His 2000 defense ranked 14th in the nation in total defense and 15th in rushing defense, helping the Tigers to a 9-4 record and a berth in the Citrus Bowl against Michigan. Auburn won the Western Division of the Southeastern Conference that season.

This past season, his defense had a lot to do with Auburn’s berth in the Peach Bowl. One of Auburn’s victories was a 23-20 triumph over then #1 ranked Florida. Lovett’s defense held Florida to 20 points, -36 yards rushing and 328 yards of total offense, season lows in all three categories for Steve Spurrier’s team that finished the season ranked third in the nation. The Tigers also forced five turnovers in the game, including four interceptions of passes thrown by Heisman Trophy finalist Rex Grossman. Lovett’s defense also held Georgia’s high powered attack to but 17 points in a 24-17 Auburn triumph.

The 51-year-old coach, who was born in Nyack, NY, worked under Tommy Tuberville, the last seven years, four at Mississippi (1995-98) and three at Auburn (1999-01). He coached the secondary all four years he was at Mississippi, including the 1997 season when the Rebels had an 8-4 record, including a victory in the Ford Motor City Bowl.

Lovett began his career in coaching at St. Joseph’s Regional High School in Montvale, NJ in 1976. He worked at that school for two years, also serving as a track coach. He started his college career in 1978 at Union College in New York. He served as a part-time coach from 1978-80, then was elevated to full-time status in 1980. He worked with the inside linebackers in 1980 and 1981, then was elevated to defensive coordinator status in 1982.

Lovett spent the 1983 season in the Ivy League at Brown, then moved back to New York to work under Joe Walton as an intern coach with the New York Jets in 1984. The 1985 season brought him to Maine as defensive coordinator. In 1989 he joined Head Coach Tim Murphy in his move to the University of Cincinnati. He remained at Cincinnati through the 1992 season. In 1993 he coached at UNLV as the secondary coach.

Lovett graduated from C.W. Post College in December of 1973. His final season, the fall of 1973, the linebacker served as team co-captain. After graduation from C.W. Post, he enrolled in graduate school at the University of Denver and he earned his Master’s Degree in 1975. The next year he entered the coaching profession.

Lovett is married to the former Carol O’Connor.