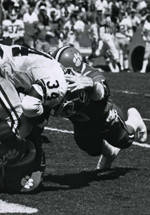 Jeff Davis to be Inducted into College Football Hall of Fame

Clemson, SC – Former Clemson consensus All-American and 1981 ACC Player of the Year Jeff Davis will be one of 12 players inducted into the College Football Hall of Fame in December. The announcement was made Wednesday by the National Football Foundation and College Football Hall of Fame. Davis was the co-captain and leading tackler of Clemson’s 1981 National Championship team.

Davis will be inducted at the Waldorf Astoria on December 4, along with 11 other former college players and two former coaches. Joining Davis in the class will be Tom Brahaney, Oklahoma center from 1970-72; Dave Brown, Michigan defensive back from 1972-74; Doug Flutie, quarterback from Boston College, 1981-84; Johnny Johnson, safety at Texas, from 1976-79; Rex Kern, quarterback at Ohio State from 1968-70; and Ahmad Rashad, Oregon running back and receiver from 1969-71. Also inducted will be Anthony Thompson, Indiana running back from 1986-89; Wilson Whitley, Houston defensive tackle from 1973-76; Reggie Williams, Dartmouth linebacker from 1973-75; Richard Wood, Southern California linebacker from 1972-74; and Chris Zorich, Notre Dame defensive tackle, 1988-90.

The two coaches who will be inducted are Herb Deromedi of Central Michigan, 1978-93, and Joe Paterno of Penn State, 1966-present. Paterno was elected in 2006, but could not attend the ceremony due to an injury.

When examining Davis’s contributions to Clemson athletics in terms of leadership, citizenship and athletic records and awards, it is no surprise that he will become just the third player in Clemson history to be inducted into the College Football Hall of Fame.

Davis played 40 games for Clemson between 1978-81 and had 469 career tackles, still third in Clemson history. He also accumulated 16 passes broken up, 20 passes defensed, 18 tackles for loss, four sacks and four interceptions. He started all 35 games for the Tigers between 1979-81. He was a model of consistency, registering at least double figures in tackles in 22 of his last 23 games. Overall, he had 30 double figure tackle games in his 40-game career and led the Clemson team in tackles in 25 different games.

For his accomplishments in 1981, Davis was named the MVP of the ACC, just the third defensive player in league history to win the award. He concluded the season in grand style with a 14-tackle performance in the 22-15 Orange Bowl win over Nebraska that clinched the National Championship for the Tigers, Clemson’s first national championship in any sport. Davis was named the Defensive MVP of the contest. Earlier in the year he had led Clemson to victory over Georgia (13-3 at Death Valley) with 11 tackles. It was the only regular season loss of Herschel Walker’s career and the victory was a key win in Clemson’s National Championship season.

Davis was a fifth-round draft choice of the Tampa Bay Buccaneers in 1982, but proved the NFL scouts wrong by posting impressive numbers in a six-year NFL career. The inside linebacker played in 83 games, 72 as a starter between 1982-87. He led Tampa Bay in tackles three of the six years, including a career high 165 stops in 1984, and served as the team captain for four seasons. He still ranks eighth in Bucs history in career tackles with 662.

Since the end of his playing career Davis has been inducted in the Clemson Hall of Fame in 1989 and to the school’s Ring of Honor in Memorial Stadium in 1995. He was inducted into the state of South Carolina Athletic Hall of Fame in 2001 and was named to the ACC’s 50-Year Anniversary team in 2002.

Davis gained national acclaim when he was the Field Director of the Call Me Mister Program in South Carolina. The program raises money for scholarships for African American males in the state of South Carolina who are pursuing secondary education as a career. In 2001, he received the “Use Your Life Award” from Oprah’s Winfrey’s Angel Network. He was presented the award on Winfrey’s program and she also contributed $100,000 to the Call Me Mister program.

Davis is now an assistant athletic director for fund raising in the Clemson Athletic Department and he remains active in the Call Me Mister program as a consultant.