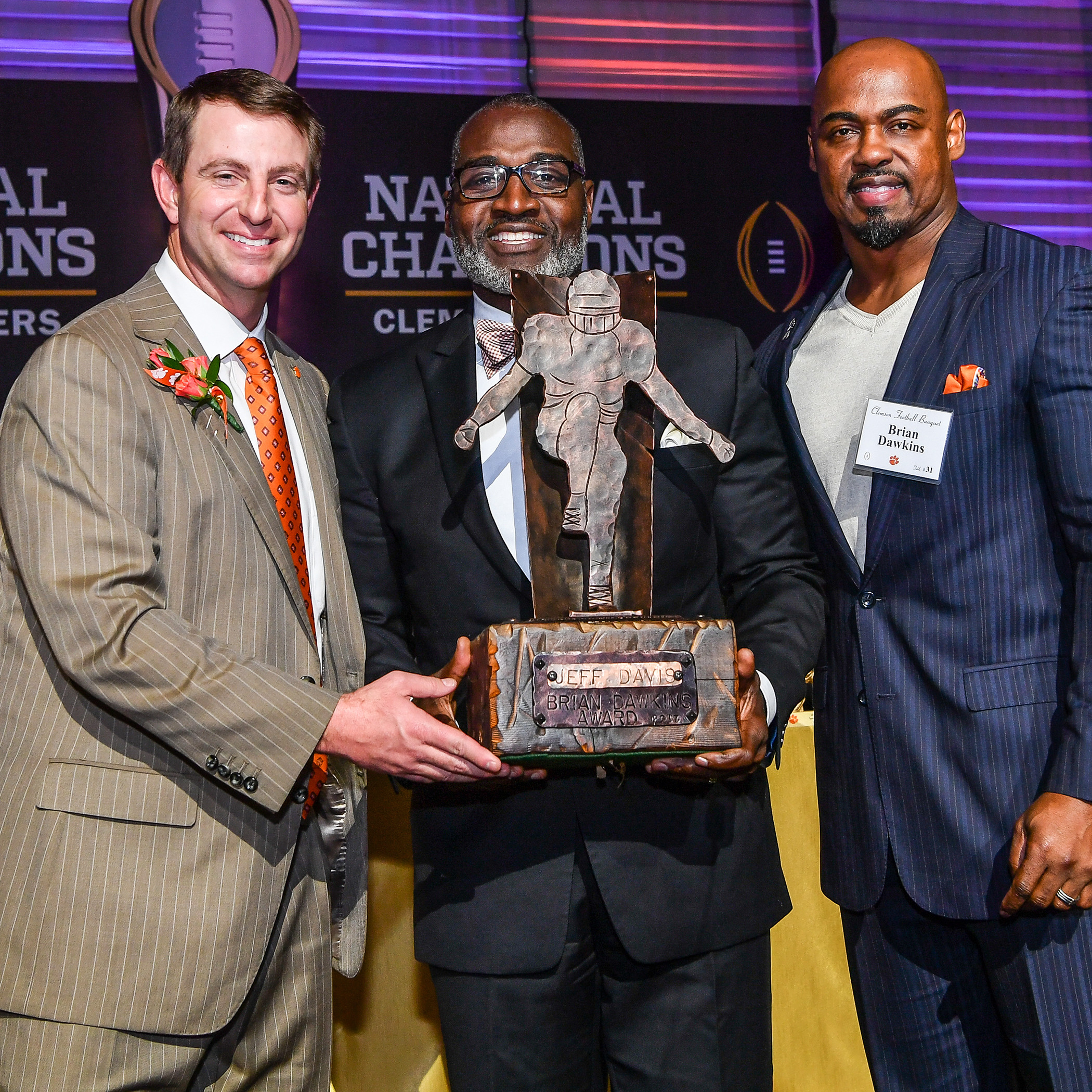 Dawkins had just retired after 16 years in the NFL with the Eagles and Broncos. He was regarded as one of the greatest safeties in NFL history and still holds the league record for caused fumbles by a safety. He is the only player in NFL history with at least 37 interceptions, 37 caused fumbles and 25 sacks.

But Dawkins was regarded as more than just a football player. He was known for his work in the community and received the Byron “Whizzer” White Award in 2009, the only former Tiger to win the award in its 50 years of existence. The award honors the NFL player who best serves his team, community and country in the spirit of White, who was a Supreme Court justice, professional football player, Navy officer and humanitarian.

It did not take Swinney long to determine he not only wanted to give Dawkins an award, he wanted it to be a yearly award presented in his honor.

“I want this award to continue long after I retire from Clemson,” stated Swinney.

“What a great role model Brian Dawkins has been to the players in our program,” said Swinney. “His achievements on the field are legendary, but he also did everything in a first-class manner and is one of the most respected NFL players in recent decades. He did everything the right way.”

The announcement that Davis had won the Brian Dawkins Lifetime Award was first made at the 2016 season banquet in January. How fitting that he won the award in a season Clemson won its first national title since he was a captain of Clemson’s only other national championship squad (1981).

“Winning this award tells me I am making my life count,” said a humble Davis. “I am making a difference, not only for myself, but for my family and all the students and people at Clemson I come in contact with. It is very rewarding.”

One of Swinney’s intentions with the award was to have his players learn the history of Clemson and appreciate those who have come before them. It was also established to give his players someone to emulate, people who continue to make a difference with the Clemson program and society in general.

Dawkins certainly did that. You can tell that by seeing how people in Philadelphia hold him in such high esteem. The year he retired from football, his jersey number (20) was retired by the Eagles, just the ninth number in the 80 years of the franchise to be retired.

Davis returned to Clemson to lead the university’s Call Me Mister Program. It is a program that recruits young African-American males to become secondary educators.

When Swinney became Clemson’s full-time head coach in 2009, one of the first people he wanted to hire was Davis.

Today, Davis continues to have a significant impact at Clemson through the P.A.W. Journey, the football team’s program that gives guidance to its student-athletes in terms of personal growth, life skills, community service and career development.

“I have been so blessed to be a part of this program,” said Davis. “It has gone so fast from the time when I was a freshman (1978). I never thought about being in this position when I was playing.

“To have an impact on these young men is so rewarding. Helping the young men with this opportunity and seeing them graduate and becoming good young men…I am thankful.”

In many ways, the comparisons between Davis and Dawkins are striking. Both played the game with incredible passion and with a physical nature. But both are soft spoken in their current profession. While Davis is molding the lives of young men at Clemson, Dawkins is the executive of football operations for player development for the Eagles, giving guidance to young professionals.

When you see former Clemson All-American Deshaun Watson give his first NFL game paycheck to three cafeteria workers in the Houston Texans complex, all of whom lost most of their possessions due to hurricane Harvey, it brings great pride to Davis.

“We tell our players that the Clemson experience is not just a three or four-year experience, it is a lifetime experience. Deshaun Watson is a perfect example. He is an outstanding young man, and I hope the life skills he learned here will benefit him the rest of his life. That is the goal for this program, and it is something coach Swinney emphasizes to his players and the staff every day.”

Davis is quick to point out that one of the aspects of the Brian Dawkins Lifetime Achievement Award is to bring to light to current players the impact of former Tigers over time. And he is talking about the impact of more than just the great players.

“Our current players need to know that the foundation of this program goes back to the beginning. There are countless players and coaches who made this program what it is today…going back to the first team, then on to Frank Howard, Fred Cone, Jerry Butler, Steve Fuller, Danny Ford and up to recent years with Tajh Boyd and Sammy Watkins.

“And I don’t mean just the All-Americans. There have been so many who have gone on to represent the program in a positive manner who were not All-Americans. This award is for them as well. Our current players need to know them.”