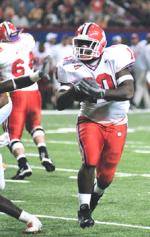 Clemson running back Chad Jasmin has been named to ESPN.com’s inaugural All-Bowl team. Jasmin helped the Tigers to a 27-14 victory over sixth ranked Tennessee in the Chick-fil-A Peach Bowl on January 2.

Jasmin, a graduate student from Louisiana, had 15 rushes for 130 yards and a touchdown in leading the Clemson offense in the victory. He was named the Offensive Player of the Game by the media covering the game. It was the first 100-yard rushing game of Jasmin’s career.

Jasmin finished the season with 523 yards rushing in 112 carries, a 4.7 average. He led the team in rushing touchdowns with nine and was second in rushes of over 10 yards with 15. He was Clemson’s second leading rusher on a yardage basis behind Duane Coleman, who had 615.