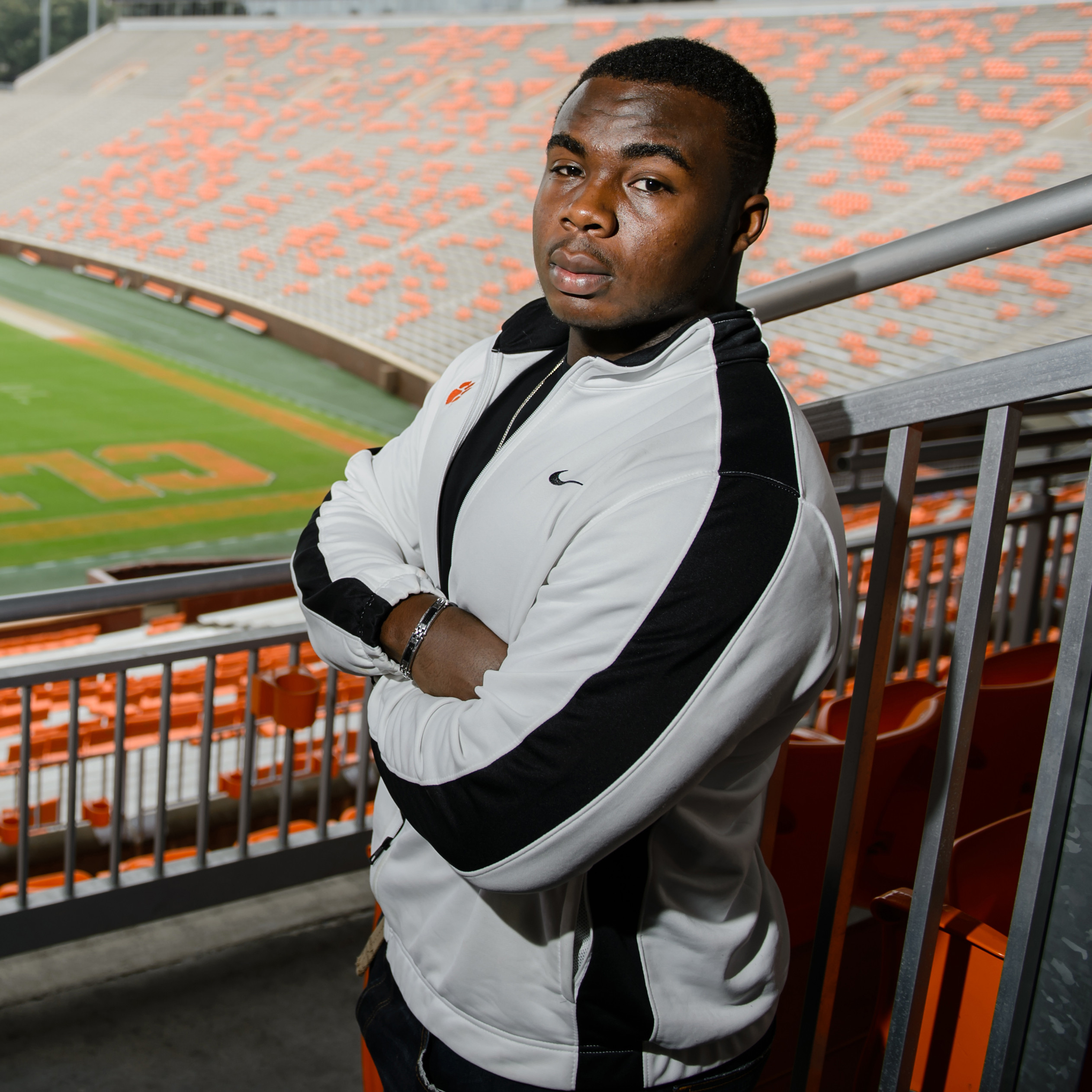 Note: This article appeared in the November issue of Orange The Experience. For information on joining IPTAY, visit iptaycuad.com.

Only listed at six-feet tall, Grady Jarrett doesn’t have the size of most prototypical defensive tackles. Plenty of colleges refused to recruit the Conyers, Ga., native because he lacked the height defensive line coaches covet despite posting massive numbers at Rockdale County High School.

Instead of sulking, Jarrett turned the criticism into motivation. Jarrett knew that if he worked hard he could prove he belonged.

“I wasn’t really a highly recruited guy but I have always felt I could compete with anybody,” Jarrett said. “Once I got here, it was proven. A lot of other people bought the size factor and other things that don’t deal with playing the game. There’s always a chip on my shoulder and it has propelled me to where I’m at today, and will continue to.”

Clemson head coach Dabo Swinney noticed the relentless passion of the undersized defensive tackle and decided his desire to be great made him worth the scholarship.

“Well, we turned him down three times initially and decided we’re not going to take him until he came to camp and he won every matchup,” Swinney said. “Then he wouldn’t go to the end of the line, he would get right up and go again. He was here to prove a point, and I’ve just never seen a guy work, ever, like I saw him work that day.

“I went up to the coaches and told them, ‘We’re going to take this guy.’ He may not be as tall as we want or whatever, but I’ve never seen a guy come through here like he has.”

While some doubted Jarrett belonged at a program like Clemson, he continued to work hard. So hard, in fact, the staff decided he would play his true freshman year and avoid a redshirt, a tough task for any college player, especially along the defensive line.

When the 2011 season opener against Troy rolled around, Jarrett was thrust into live action for the orange and purple.

“Some people didn’t even think I belonged here and then I came and didn’t even redshirt, and that just shows how hard I worked and the type of player I was,” Jarrett said. “I didn’t play as much as I liked to back then, but everything happens for a reason. It’s been wonderful.”

Jarrett would go on to play in eight more games, logging 61 total snaps his freshman year. Following Brandon Thompson’s graduation to the NFL in 2011, Jarrett became the heir to one of the starting defensive tackle positions.

He made his first career start at the Georgia Dome to begin the 2012 season, less than 25 minutes from his hometown. In his debut, Jarrett recorded three tackles as the ACC Tigers would narrowly defeat the Auburn Tigers of the SEC, 26-19.

Despite earning early playing time, the adjustment wasn’t easy for the defensive tackle.

It didn’t take long for Jarrett to prove he could be a disruptive force. In his second career start against Furman, he posted seven tackles, including one for loss and two quarterback pressures earning co-defensive player of the game honors for the team.

Jarrett was able to build on his success and finished the season with 49 tackles, 8.5 tackles for loss, and 10 quarterback pressures. His strong play began to capture attention, as he was named an honorable mention All-ACC selection by the coaches.

While Jarrett admits it took some time to grow accustomed to playing football on the collegiate level, the biggest obstacle he had to face was balancing the rigors of academics and athletics. Once he was able to develop a routine, he started to have success both in the classroom and on the playing field.

“With Clemson being a Top-20 University and being a business management major, it has been very demanding,” Jarrett said. “As much commitment as I put to the football side of things, it’s something that I had to learn how to balance. Once I got that down, it just became part of life. Once you get used to that daily routine, that’s when you get over the hump.”

Prior to the 2013 season, the defense was labeled the “No Name Defense” by tackles coach Dan Brooks due to the sheer amount of turnover on the defensive side of the ball after the 2012 campaign. This only motivated the defense, especially Jarrett and his line mates.

“We felt like we were better than what was being portrayed of us, and it’s very satisfying to see everything come to fruition and how a lot of people along the D-Line are having very good careers.”

The Tiger defense went on to lead the nation with 122 tackles for loss. Jarrett’s 11 TFLs from the defensive tackle position ranked third on the team. The caliber of the talent along the defensive line has given opposing offensive coordinators headaches, as they attempt to plan for the Tigers’ explosiveness. Any strategy typically leads to opposing quarterback headaches because of constant harassment by Tiger defenders.

“It’s definitely a blessing to have players that the offensive team really has to focus on,” Jarrett said. “We just complement each other and it’s been very successful for us. That’s a compliment to our coaches and our strength staff, just transforming us to the players that we are today.”

While he may not have been known nationally before the season, Jarrett’s impressive junior campaign drew the attention of not only the media, but also NFL scouts. His strong play left Jarrett in a difficult predicament.

Should he forgo his final year of eligibility and enter the NFL Draft or return for his senior season to improve his stock and play one more season in Death Valley? It didn’t take Jarrett long to arrive at his conclusion.

“I realized I had a lot of work left to do and knew I wanted to be back in Clemson for another run and get better and enjoy my Clemson experience and graduate,” Jarrett said. “I definitely wanted to graduate. I knew I could be a better player if I came back another year and so far, everything has been going really well.”

With six seniors listed on the two-deep along the defensive line, Jarrett had the desire to finish his career with many of the guys in which he began his career. He wanted to progress from the no-name defensive line to one of the best in the nation.

“You’re playing with guys that have been here with you since your freshman year,” he said. “You’ve all been along the same stages of your career, transitioning into starting, transitioning to becoming dominant nationally. It’s definitely been great, going from essentially the bottom to the top and trying to get better every year.”

At the midway point of the 2014 season, Jarrett had recorded 31 tackles and six quarterback pressures. But even though he doesn’t enjoy the best statistics on the team, the attention focused on Jarrett often creates opportunities for Stephone Anthony, Vic Beasley and other formidable players on Clemson’s defense.

Opposing coaches have lauded the play of Jarrett. Boston College head coach Steve Addazio has great respect of the disruption he causes at the point of attack.

“No. 50, their nose tackle (Grady Jarrett), he’s completely dominant,” Addazio said. “No one blocks him. Not a soul. Not Florida State. Not Georgia. Nobody’s blocking him. Nobody.”

With only a few games remaining in his final campaign, Jarrett is slowly shifting his attention to the future; a future that hopefully involves football on Sundays.

Deemed the ‘heart and soul’ of the defense by Swinney, the Clemson head coach knows his star defensive tackle will enjoy success at the next level.

“One of the best players I’ve ever been around,” Swinney said. “Thirteen years at Alabama, 12 years at Clemson, and he’s easily in my top 10 ever across all positions.”

As he stands at the top of the Hill for the final time, Jarrett knows he will be full of emotion — of teammates, of memories, and of the way Clemson has molded him into the man he is today.

“There’s going to be a lot of emotions and I’m just going to try and take it all in and really savor that moment,” he said. “But at the same time, I don’t want to be too emotional because I have to go down there and play a really big game. I think it’s going to be a really good night.”

Throughout his career, Jarrett has proven the importance of a strong work ethic. From lightly recruited out of high school to one of the best defensive tackles in college, his play on the football field dictates his success.

When Jarrett stands at the top of the Hill for the final time, the Clemson Family is going to see a teammate, a friend, an inspiration and a perfect ambassador of the University he represents on his uniform every week.