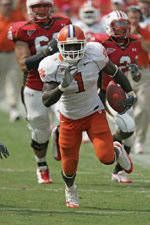 Clemson running back James Davis was named the 2005 ACC Rookie-of-the-Year on Tuesday, announced by the Atlantic Coast Sportswriters Association. Davis, a true freshman from Atlanta, GA and graduate of Douglass High School, received 40 of the 72 votes. He finished ahead of quarterback Drew Weatherford (19) and wideout Greg Carr (5), both standouts at Florida State.

Davis has rushed for 729 yards in 10 games, as the rushing total is the second-best by a freshman in Clemson history. He played only one snap at Georgia Tech and missed almost the entire second half at N.C. State after breaking his wrist, therefore effectively played in just over 8.5 games. He also played his last four games with a cast on his wrist. His 72.9 yards per game ranks fourth in the ACC and tops among freshmen, while his eight touchdowns are a team high and tied for the most by a Clemson freshman in history.

Among the ACC’s top-10 rushers, Davis’ 5.3 yards per carry is second-best in the league. He has that figure against a strong defensive conference that does not feature a team that averages 400 yards per game of total offense. Davis also does not have a carry longer than 33 yards, meaning he has consistently posted solid gains.

The 5’11”, 210-pound sport management major has surpassed the 100-yard mark on the ground three times in 2005, as Clemson has a 3-0 record in those contests. He has also led the team in rushing five times, helping the Tigers to a perfect 5-0 record in those games (three of which were against top-25 ranked teams).

Davis rushed for 101 yards on 19 carries in the season-opening win over #17 Texas A&M, where he carried the ball on all eight offensive plays of the game-winning drive that set up Jad Dean’s game-winning 42-yard field goal with two seconds left in the fourth quarter. The 101 yards were the most by a Tiger first-year freshman in his first game since Bobby Gage rushed for 144 yards against Presbyterian in 1945.

In the first half and one play in the second half at N.C. State before suffering a fractured wrist, Davis rushed for 143 yards on just 12 carries to lead the Tigers to a 31-10 victory. In the regular-season finale at #19 South Carolina, he rushed for a team-season-high 145 yards on 27 carries to propel Clemson to a 13-9 win, as he scored the game’s lone touchdown and received ACC Offensive Back-of-the-Week honors. That was one of four times he was lauded by the league with either ACC Rookie or Offensive Back-of-the-Week honors in 2005, including an ACC-high three times as rookie-of-the-week.

Davis, a two-time National Freshman-of-the-Week and Second-Team Freshman All-American by Rivals.com, also has been a productive receiver out of the backfield, hauling in 17 catches for 131 yards. The 17 catches are fourth-most on the squad.

Davis became the first Tiger to earn ACC Rookie-of-the-Year honors since 1995, when linebacker Anthony Simmons received the award. He is also the fifth Tiger to be named the league’s top rookie. Along with Simmons, running backs Chuck McSwain (1979), Terry Allen (1987), and Ronald Williams (1990) also won the award.