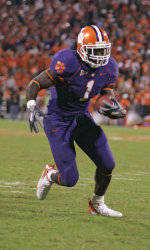 The semifinalists (in alphabetical order) are:

The 166 members of the Doak Walker Award National Selection Committee will cast their votes over the next week to determine the 2006 finalists. On Tuesday, November 21, three finalists will be named, and a second vote will determine the recipient. The recipient of the 2006 Doak Walker Award will be announced live on ESPN’s The Home Depot College Football Awards on Thursday, December 7.

The award will be presented at the 2006 Doak Walker Award Presentation Banquet in Dallas on Thursday, February 15, 2007. The late Walter Payton, former Jackson State and Chicago Bear great, was named the recipient of the 2006 PricewaterhouseCoopers Doak Walker Legends Award and will also be honored at the banquet.