How does a set of identical twins from Vestavia Hills, Ala. get to Tigertown? Clemson football was not an unfamiliar term to Jacob and James Edwards before playing with the Tigers.

Their father knew Dabo Swinney in high school, so watching Clemson football was a regular in the Edwards household. Their friend and former teammate from Vestavia Hills High School, Nolan Turner, was recruited by Clemson just a year before they graduated. Jacob explained that although those were great connections to have, they were the not the deciding factors.

“Once we came and really saw what Clemson was all about, that’s what made James and me want to be here,” said #69.

Jacob, along with his brother James, was a standout football player for Vestavia Hills High School and was a huge asset to the wrestling team as well. In 2017, the twins found the opportunity to play football at Clemson as walk-ons and saw their first action as redshirt freshmen in 2018. After two years on the team, both were surprised with the honor of being put on scholarship.

When it comes to playing football with his brother, Jacob believes that having a family member with him on the ride of college football has made things easier.

“With the transition into college, having each other made things go more smoothly. We were able to have each other for everything, whether that was hanging out or having someone to work out and practice with. But once Clemson became comfortable to us, we were able to grow individually, but knew we still had each other to lean back on.”

However, Jacob’s favorite thing about playing with his brother is getting to compete against him.

“It was really fun playing defense together, but when I switched to the offensive line, it was even more fun to face each other in practice, which I think has made me a better player.”

When asked how he became involved in football in the first place, Jacob explained how his father was a huge influence in playing the sport.

“My dad was definitely the reason we both started playing football, as in we didn’t have much of a choice,” he laughed. “He played college football at UAB, so him having that background automatically led us to starting the sport as well.”

Both started out playing on the defensive line, but after the 2019 season, Jacob switched to the offensive line.

“Defensive line didn’t feel right for me anymore, so I tried playing offensive line since that was the position I always played up until high school. Immediately, the position fit so much better. Offensive line was what my dad played in college, and he loved it just like I did, so going back to that was where I needed to be, especially since I can win against James now.”

As he talked about what he has learned from playing football at Clemson, Jacob gave high praise to all of his coaches.

“The coaches here don’t just coach you on football, they coach you on life, too. They are always striving to make us better men before better football players.”

Jacob also explained that the biggest lesson he has learned from his journey at Clemson is that hard work does not go unnoticed.

“I learned that even when I feel overlooked or things are not going my way, I just have to keep my head down and continue working hard, and eventually, you will get noticed.”

Jacob graduated in August with a degree in PRTM and is working towards receiving his graduate degree in athletic leadership. He is also a P.A.W. Journey ambassador and was an ACC Academic Honor Roll member in 2020. 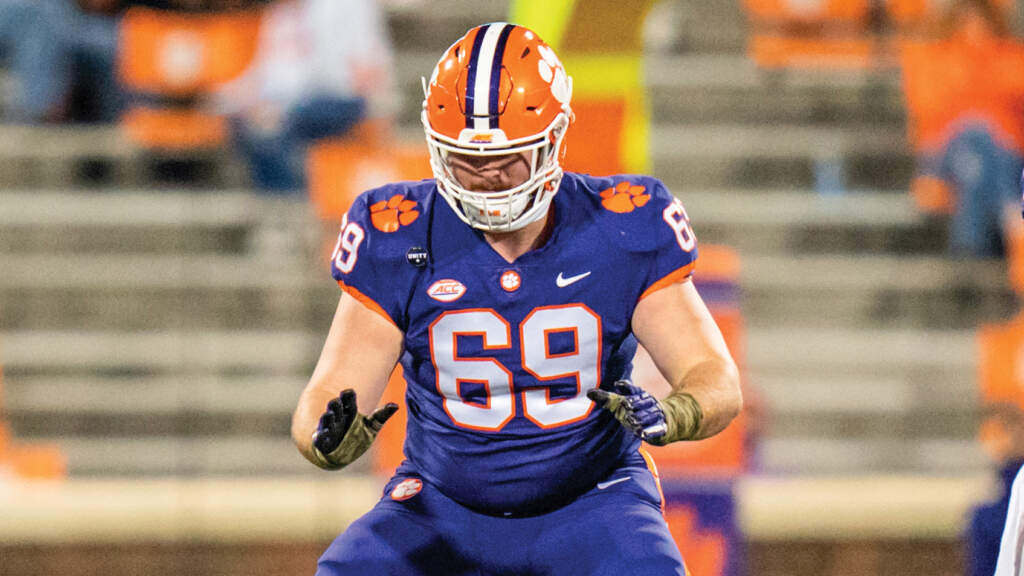