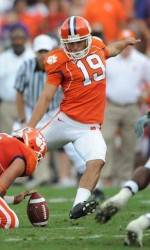 Jackson One of Three National Kickers of the Week

College football’s top kicking award, the Lou Groza Collegiate Place Kicker Award sponsored by the Palm Beach County Sports Commission recognizes three of the top kickers each week from FBS division (Div 1A) teams as the “Stars of the Week”.

A record-tying performance by Clemson junior kicker Richard Jackson sparked the Tigers 25-7 defeat of Boston College in ACC action Saturday in Clemson. Jackson tied the team’s single game record set by 2005 Groza semi-finalist Jad Dean with 6 field goals in a game dominated by special teams and defense. He connected from 23, 33, 32, 52, 42, and 35 yards. Jackson is the first Clemson player to have two field goals of at least 50 yards in two games since 1992. He is the second player in Clemson history to have field goals of at least 50 yards in consecutive games, connecting from 53 yards versus Georgia Tech last week.

It was the stuff of which Hollywood scripts are made when Erik Folk kicked a 22-yard field goal with 3 seconds remaining to complete the University of Washington’s upset of No. 3 USC in a 16-13 victory Saturday in Seattle. Folk, a sophomore and Los Angeles area native, added kicks of 28 and 46 yards to help continue the Huskies rebound from last year’s 0-12 season. Due to injuries Folk saw no game action in either his true or redshirt freshman seasons.

A last second Virginia Tech touchdown ruined a red letter day for Nebraska junior kicker Alex Henery, and allowed the No. 13 Hokies to escape with a 16-15 decision. Henery, a Groza Award pre-season watch list selection, scored all 15 of the Huskers points with field goals of 40, 27, 19, 38 and 38 yards.. Henery’s five field goals tied him for second-most in Nebraska history, and extended his streak to 19 successful kicks inside the 50-yard line. Henery now has four career games with at least four field goals.

The Lou Groza Award will be presented as part of the ESPN Home Depot College Football Awards Show in Orlando, Florida on Thursday December 10th. The three finalists will be feted at the 18th Annual Lou Groza Awards Banquet on Tuesday December 8th at the KravisCenter in West Palm Beach, Florida. For more information on the Groza Award and the Palm Beach County Sports Commission, visit www.palmbeachsports.com.