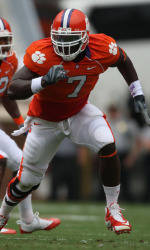 Jackson and Sapp Named ACC Football Players of the Week

Hudson and Reid helped lead the Seminoles to a 54-28 upset win against seventh-ranked Brigham Young on Saturday (Sept. 19), a win which vaulted Florida State to No. 18 in the most current Associated Press Top-25. Harris took in his second honor of the season in helping the Hurricanes to a 33-17 win against No. 14 Georgia Tech on Thursday night (Sept. 17) in front of a national television audience on ESPN, a win that propelled Miami to a No. 9 AP ranking, the Hurricanes’ first top-10 ranking since 2005.

Sapp helped the Clemson defense post numbers the program has not seen in 20 years, while Jackson tied an ACC record with six field goals in a 25-7 win against Boston College. Williams helped the Hokies to a win against 19th-ranked Nebraska.

SPECIALIST – Richard Jackson, Clemson, PK, Jr., 5-11, 190, Greer, S.C., (Riverside) Clemson junior placekicker Richard Jackson is the second Clemson specialist this season to earn ACC Specialist of the Week honors (C.J. Spiller in week one) after tying an ACC single-game record with six field goals and tying a school record with 19 total points in a 25-7 win against Boston College. Despite all-day rain and two lightning delays, Jackson was a perfect six-for-six on field goal tries and converted attempts from 23, 33, 32, 52, 42, and 35 yards. His 52-yarder tied for the second-longest field goal in the ACC this season and makes Jackson the first Clemson kicker since 1990 to kick a 50-yard field goal in two straight games. Jackson is the only player in the nation to have kicked six field goals in a game this season and leads the Division I Football Bowl Subdivision with 3.7 field goals per game this season.

DEFENSIVE LINEMAN – Ricky Sapp, Clemson, DE, Sr., 6-4, 245, Bamberg, S.C. (Bamberg-Ehrhardt) Clemson senior defensive end Ricky Sapp became the second Tiger to take home ACC Defensive Lineman of the Week honors (Brandon Maye in week one) for helping the Clemson defense post numbers that the program has not seen in 20 years in a 25-7 win against Boston College. Sapp had four tackles, including three for losses of 18 yards, and two sacks. He also forced a fumble and tallied two quarterback hurries. More impressively, however, he helped the defense limit the Eagle offense to four first downs, the fewest by a Tiger opponent since 1989, and 54 yards of total offense, the fewest allowed since 1963, and Clemson’s second-lowest total against an ACC team.

OFFENSIVE BACK – Jacory Harris, Miami, QB, So., 6-4, 190, Miami, Fla. (Northwestern) For the second time in three weeks, Miami sophomore quarterback Jacory Harris was selected as the ACC Offensive Back of the Week. Both of Harris’ selections in 2009 have come after performances in prime time games – after a 38-34 win at No. 18 Florida State (Sept. 5) and a stellar game in a 33-17 win against 14th-ranked Georgia Tech last Thursday night (Sept. 17) on ESPN. Harris helped Miami to its second straight conference win by completing 20-of-25 passes-a career-high 80.0 percent completion rate-for 270 yards, and three touchdowns. The sophomore signal caller completed a career-long 40-yard touchdown aerial to sophomore wide receiver LaRon Byrd in the opening quarter and has completed at least 20 passes in three straight games, dating back to last season’s finale.

OFFENSIVE LINEMAN – Rodney Hudson, Florida State, G, Jr., 6-2, 283, Mobile, Ala. (BC Rain) Florida State guard Rodney Hudson became the second Seminole in as many weeks to be named ACC Offensive Lineman of the Week – joining senior tight end Caz Piurowski – in helping the Seminole offense rack up 54 points against seventh-ranked Brigham Young. The graded out at 88 percent and helped anchor an offensive line that paved the way for 313 rushing yards, the most for Florida State since a 397-yard output against Virginia in 2002. Additionally, Hudson was not penalized and provided plenty of protection for junior quarterback Christian Ponder, who was not sacked in the win.

DEFENSIVE BACK – Greg Reid. Florida State, CB, Fr., 5-9, 175, Valdosta, Ga. (Lowndes) Florida State true-freshman cornerback Greg Reid kept the Seminoles’ first-half momentum in its favor by beginning the second half with a 63-yard interception return for a touchdown in a 54-28 upset win against seventh-ranked Brigham Young. Reid jumped an inside pass route and picked off Brigham Young quarterback Max Hall’s pass-one of three miscues forced by the `Nole defense in the game-and raced 63 yards to extend Florida State’s lead to 23 points. He also recorded two tackles and a quarterback hurry on defense and returned three kickoffs for a total of 71 yards (23.7 yards per return). Reid leads the Florida State defense with two interceptions in 2009.

ROOKIE – Ryan Williams, Virginia Tech, RB, Fr., 5-9, 205, Manassas, Va. (Stonewall Jackson) For the second time in three weeks, Virginia Tech freshman running back Ryan Williams had the best performance of all first-year players in the league by posting 100 rushing yards for the second-straight game in a 16-15, come-from-behind win against No. 19 Nebraska. Williams gained 107 yards on 21 carries (5.1 ypc) and scored his sixth touchdown of the season, giving him an average of two scores per game over his first three collegiate games. Williams currently leads the league with 114.0 rushing yards per game.