Over the past four seasons, Tiger fans have borne witness to true greatness at the running back position. In the third quarter against Boston College on Halloween, Travis Etienne broke the ACC record for career rushing yards, previously held by N.C. State’s Ted Brown (1975-78), two decades before the Tiger was even born.

From the moment the Jennings, La. native stepped onto the field in orange and purple, it was apparent he would be a special player. During his freshman season, he averaged 7.2 yards on 107 carries and scampered into the endzone 13 times.

Despite his early success, playing for the Tigers was at one point highly unlikely for the two-time ACC Player-of-the-Year. Etienne was originally committed for a year to play at Texas A&M, but when he decommitted, Clemson quickly became one of his top choices.

“Clemson was one of the top schools, and they offered me. I came and visited, and Clemson sold itself, so it played out perfectly.

“When I got here, it was the genuineness of the coaches. It was the spirit they have around here and the culture that Coach (Dabo) Swinney is building…hands-on.”

That decision has clearly panned out for Etienne, who has had historic success during his time in Tigertown. He has brought home several individual awards to go along with a national championship in the 2018 season.

Despite accomplishing almost everything a running back can in college football, Etienne left last season’s national championship game feeling unsatisfied and as though his work was not yet done. He chose to forego the NFL draft, where he would have likely been picked in the first two rounds, and returned to play at Clemson for his senior season.

Being a second-round draft pick guarantees players and their families, at minimum, some financial security. In an offseason marred by the possibility of college football being canceled altogether, it also would have offered Etienne a higher likelihood of having a season at all.

At the conclusion of his junior season, when he was named ACC Player-of-the-Year for the second consecutive season, he already held Tiger records for single-season rushing yards, rushing touchdowns and total touchdowns, not to mention he entered the season with the best yards-per-carry figure (7.8) in Clemson history.

His greatness was not debatable, and having already brought a national championship to Clemson, the star had nothing left to prove. Regardless, Etienne could not pass up the opportunity to play another football season at Clemson.

“Going home and seeing my nieces and my little brother playing sports and seeing how pure the game was…that’s the reason we got into sports. It was about remembering why I started playing football and why I fell in love with the game, and getting back to that.”

His return has put him in a very valuable senior leadership role, one the Tigers needed during Trevor Lawrence’s COVID-19 induced absence. Verbal leadership is something that did not come naturally for Etienne, but the soft-spoken running back is developing that part of his game.

When asked about Etienne’s ability to lead by example and the relationship he has with younger players, Offensive Coordinator Tony Elliott lauded his talents and his propensity to improve the players around him.

“If Travis had his way, he wouldn’t speak at all. He doesn’t like being in the limelight, but I make it known that guys are watching him. There’s a respect factor and a tangible relationship where guys can ask questions and have conversations to expand their game.” 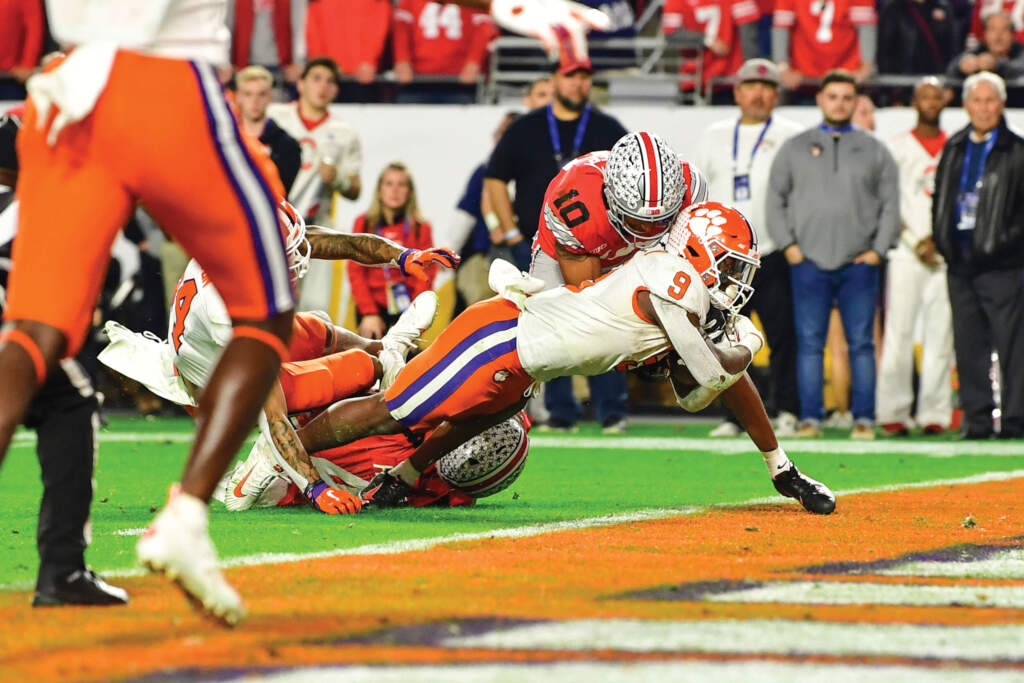 Etienne is constantly focused on doing what is best for his team, regardless of what that means for him as an individual. Racking up individual records and rewards are merely a reflection of his immense talent and his innate desire to contribute as much as possible to the team’s success.

Elliott emphasized that after the Tigers’ win over Syracuse on Oct. 24, when Etienne left the game with an injury but returned and scored two touchdowns to secure the victory.

In returning to Clemson for his senior season, Etienne has continued to rewrite school, conference and FBS recordbooks. He has set and since broken his own Clemson single-game record for receiving yards by a running back. He is also the only Tiger to rush for double-digit touchdowns in four seasons, and he has scored touchdowns in more games than any player in FBS history, among several other records.

His unrivaled individual success does not seem to faze the extraordinarily humble Etienne, who sprints to give any credit he can to his teammates and the Clemson coaching staff.

“I have to thank the people around me. It’s the place that I have around me to set me up for those awards.”

Characteristically, it really is the team accomplishments that mean the most to Etienne. His most memorable Clemson moment was winning the 2018 national championship. That season, the Tigers had a 15-0 record, and Etienne delivered the greatest statistical season by a Clemson running back, producing school records for rushing yards (1,658) and rushing touchdowns (24). Even then, he did not realize the magnitude of his accomplishments until much later.

“In that moment, it didn’t hit me at all. I felt like we had another game the next week. You don’t really notice in the moment.

“The other night, I was laying in bed, and I thought, ‘We actually won the ‘natty.’ I was a part of that team, and we built something special that I’ll remember forever.’”

Etienne’s talents are not limited to the gridiron. He is heavily involved in P.A.W. Journey, a leadership initiative designed to help Clemson football players succeed off the field. He is also a sports communication major who has earned an All-ACC Academic selection.

In the social media post that announced his intention to stay at Clemson for his senior season, Etienne stated that he looked forward to “earning my degree from this great university,” further highlighting his focus off the field.

His decision to return has led to the shattering of records that have stood for decades and has blessed Tiger fans with another year of watching #9 decimate opposing defenses. When Etienne takes the field against Pittsburgh for his final game at Death Valley, Clemson fans will know that they have been fortunate to witness a truly legendary career for four seasons as he tries to capture one more ring for his beloved Tigers.