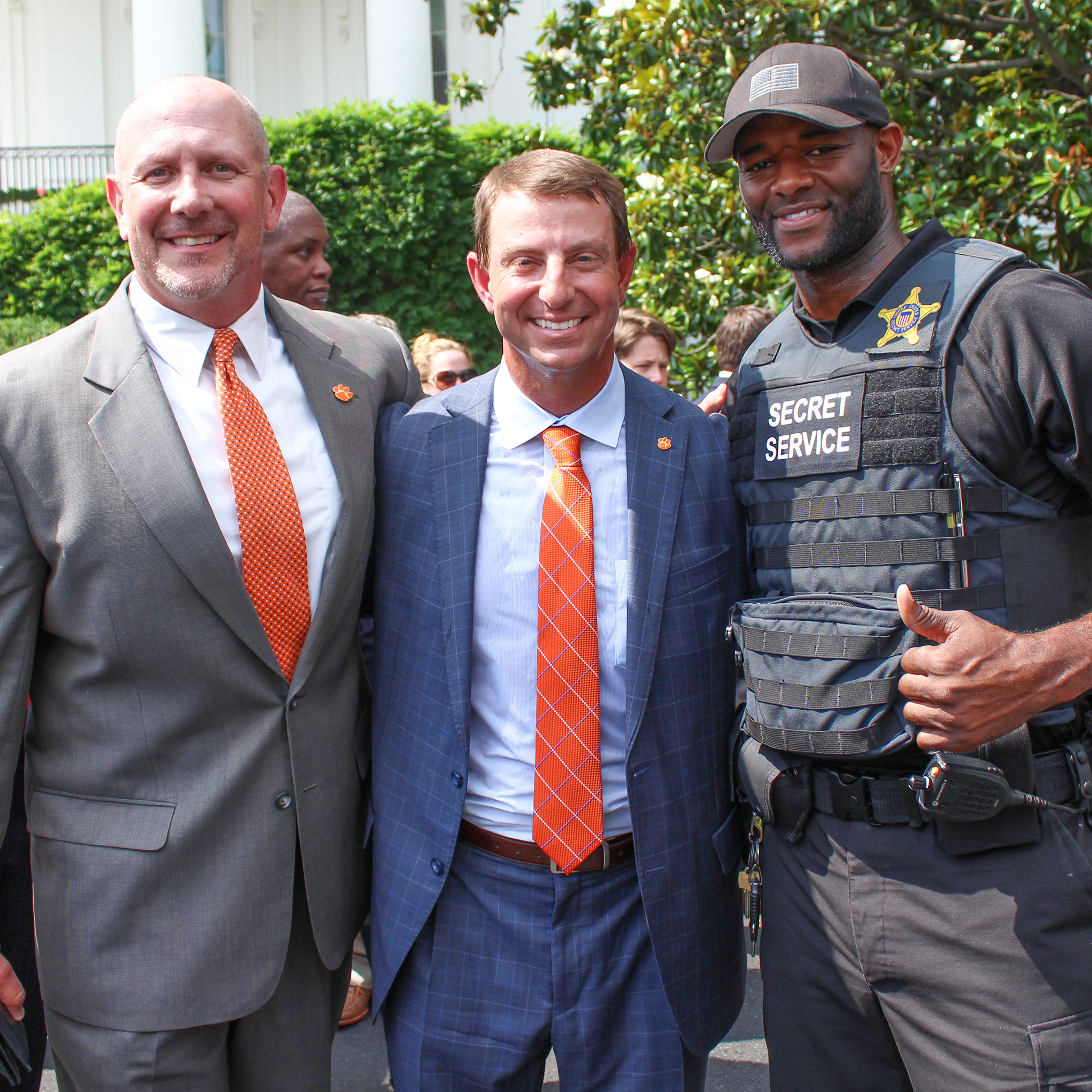 In Service To the Country

For two former Clemson football players, the June 12, 2017 trip to the White House to celebrate the program’s 2016 national championship was a special day.

“If I hadn’t been assigned to that ceremony, I might have turned in my resignation,” said former Clemson wide receiver Kevin Youngblood with a laugh.

“When the Marine Band started to play ‘Tiger Rag’ on the South Lawn, I started to tear up,” said former Tiger and 1981 national championship defensive back Billy Davis.

Both former Tigers were with the 2016 team for the entire celebration. Youngblood is a member of the Secret Service and works on the White House detail on a regular basis. Davis, who was a top reserve defensive back and punt returner on the 1981 national championship team, worked for the Secret Service for 27 years, including 11 at the White House.

“It was terrific to see both Billy Davis and Kevin Youngblood at the White House,” said head coach Dabo Swinney. “The first person we saw was Kevin Youngblood. He was involved in the security clearance for the team when we arrived.

“That was awesome to see him right when we got off the bus. It took me back to my first year at Clemson, because he was a senior wide receiver my first year.”

Youngblood was the top receiver in terms of receptions with 70 for 897 yards for 2003 Tigers that finished the season with four straight wins and a top-25 final ranking.

That is still tied for the 10th-most receptions in a season in Clemson history, and his 142 career receptions are 11th most. It was Youngblood who caught the winning touchdown in walkoff overtime fashion in a 30-27 victory over Virginia at Death Valley in 2003.

After playing three years for the Atlanta Falcons, Youngblood began to pursue a career in law enforcement and contacted Davis, who was already working at the White House, for guidance.

“It really started with Ren Windham in the football office,” said Youngblood. “I was talking to her about going into law enforcement and she gave me Billy Davis’ number.”

The further Youngblood got into the process, the more he liked it, and he officially joined the Secret Service during Independence Day weekend in 2008. He has been in the profession ever since.

“Every step of the way I talked with Billy and he gave me a heads up on how things would be. He has been a great mentor.”

That experience led to the special day for Youngblood when the Tigers came to the White House.

“The first person I saw was Dabo Swinney. That was great. He was my position coach my last year. What he has done is amazing. We all knew it when he first came to Clemson (in 2003).”

Youngblood also had the opportunity to spend time with two of his former teammates, Tony Elliott and Jeff Scott.

“It was great to see both of them as assistant coaches and coordinators. I have kept in touch with Tony ever since we were seniors together.”

“The only thing that would have completed the day would have been a burger and a shake at Mac’s.”

The day for Davis was just as special, giving him an opportunity most of the 1981 team did not have.

When Clemson won the national championship in 1981, it was not common for championship college teams to go to the White House to be honored by the president.

But, after Clemson won the title with a 22-15 victory over Nebraska at the 1982 Orange Bowl, South Carolina senator Strom Thurmond worked his connections to have a Clemson contingent visit president Ronald Reagan.

Those that attended the White House in the winter of 1982 included head coach Danny Ford, athletic director Bill McLellan and president Bill Atchley as well as players Homer Jordan and Jerry Gaillard. They presented Reagan with a Clemson national championship shirt and some other items.

You might think that would have created some jealousy among the players, but that was not the case according to Davis.

“It wasn’t very common in those days,” explained Davis. “Until the Washington Redskins won the Super Bowl after the 1983 season and Ronald Reagan invited the entire team, it just wasn’t a big deal.

“I remember finding out that Homer and Jerry went up there with coach Ford. I said, ‘that’s nice,’ and we went back to our offseason workout in the weight room.”

Davis was a four-year letterman from 1980 to 1983. He was a backup safety to one of Clemson’s greatest players ever, college football hall of famer Terry Kinard. Davis was a starter in 1983 and was Clemson’s top punt returner during the 1981 season. His 47-yard punt return against Nebraska in the 1982 Orange Bowl is still the second longest in Clemson history in a bowl game. Davis played one year in the NFL with the St. Louis Cardinals before moving into the security profession.

“It was great to get to finally see Clemson honored at the White House. It had been so long since 1981. I had been to a lot of those ceremonies for other teams, but never one that I was so close to.”

The closing was very special for Davis, who also had the opportunity to bring his daughter to the occasion.

“The Marine Band played ‘Tiger Rag,’ and to see the team there and that song being played on the South Lawn, I got chills like I did when we ran down the Hill in Death Valley. Everything came together for me.”

Davis has been a loyal supporter of the Tiger program since he graduated, and once a year would make a trip to Clemson or see the Tigers play in Maryland or Virginia.

After 27 years working for the Secret Service, Davis retired in 2015 and now has his own security company.

While it was a big day for Youngblood and Davis, it was just as big for Swinney, who celebrated the 2016 season one final time.

“It was a great day and it was really the last time we would all be together to celebrate that accomplishment until we have a reunion in 10 years.

“We had the run of the White House for three hours, and it was such an experience for everyone to take in all the history.

“At one point, I was looking at Dexter Lawrence eating a meal as he sat in a chair that was built in the 1800s. I told him to be careful. But one of the guards said not to worry…‘This is the people’s home’.”

For one afternoon in June, it was Clemson’s home.