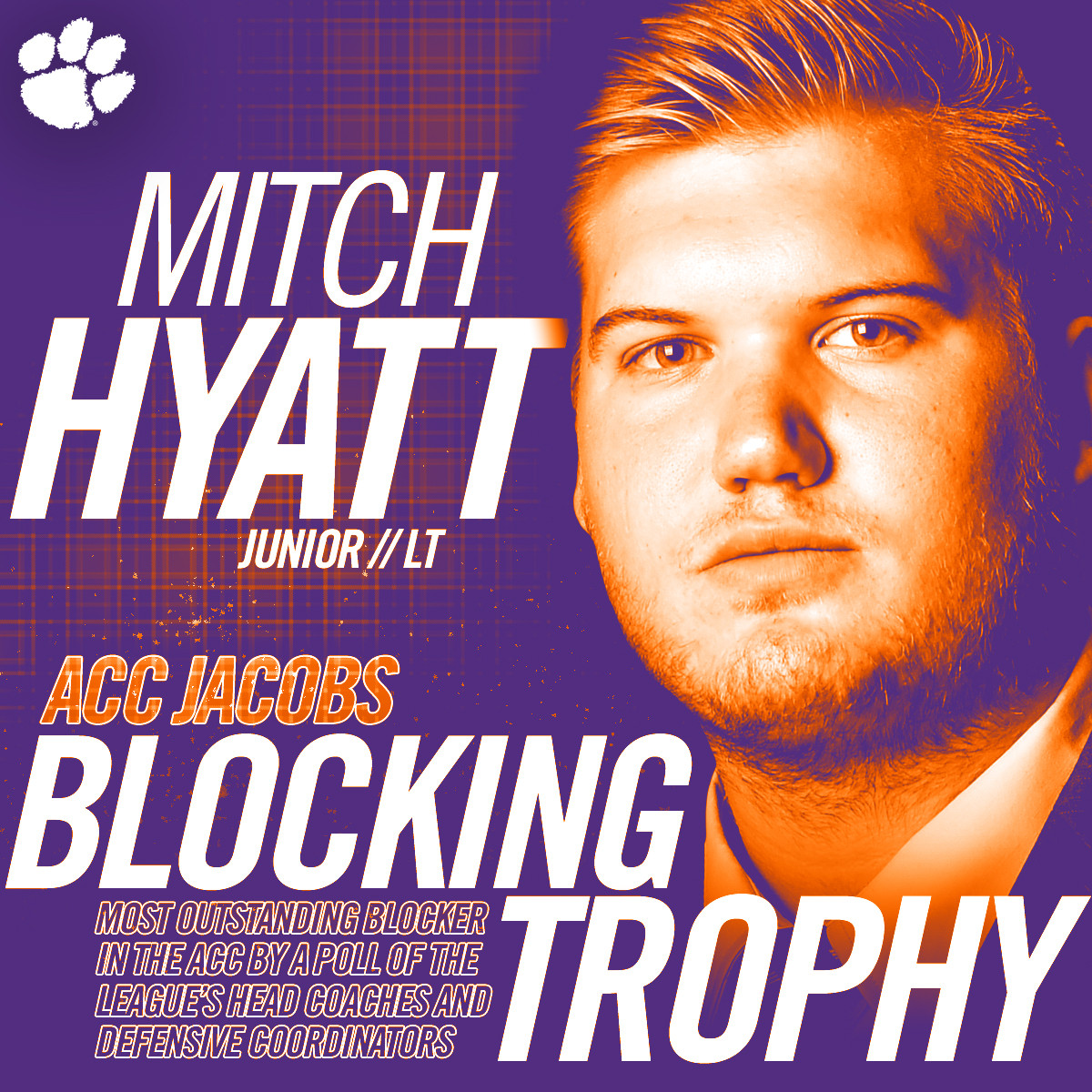 The Jacobs Blocking Trophy has been awarded annually since 1953 to the player selected the most outstanding blocker in the ACC by a poll of the league’s head coaches and defensive coordinators. Hyatt becomes the eighth student-athlete from Clemson to receive the honor and the first since offensive guard John Phillips in 1987.

“Mitch is very deserving of this award,” said Clemson head coach Dabo Swinney. “I was surprised to find out that a Clemson player had not won the Jacobs Blocking Trophy since 1987. But what Mitch has accomplished this year and over the last three years has been significant, and winning this award just adds to his significant resume.

“He has been so consistent in everything he does. We have only lost three games in the three years he has been in our starting lineup, and he has a lot to do with that.”

The trophy is given in memory of William P. Jacobs, who served as president of Presbyterian College from 1935 to 1945. Hyatt will be recognized next weekend during activities surrounding the 2017 Dr Pepper ACC Football Championship Game, which is for at 8 p.m. on Saturday, Dec. 2, at Charlotte’s Bank of America Stadium. Hyatt and his Clemson teammates will face Miami for the conference crown.

Hyatt, a 6-foot-5, 295-pound native of Suwanee, Georgia, is a three-year starter for the Tigers. A third-team All-ACC selection as a freshman two years ago and a first-team honoree last season, Hyatt earned the Jacobs Blocking Trophy this season for his role in a Clemson offense that averages more than 35 points and close to 460 yards total offense per game. The defending national champion Tigers (11-1 overall, 7-1 ACC) rank second in the conference in each of those categories.

The standout left tackle earned consecutive ACC Offensive Lineman of the Week honors, first on Oct. 30 for his play in the Tigers’ win over Georgia Tech, and again on Nov. 6 following Clemson’s road victory at NC State. In each of those contests, Hyatt graded out at 93 percent while delivering five knockdown blocks without allowing a sack.

Hyatt amassed 15 total points in the coaches’ voting to capture the 64th ACC Jacobs Blocking Trophy (no award was given in 1996). Virginia Tech’s Wyatt Teller placed second with 12 points, while Pitt’s Brian O’Neill was third with 10. A total of 23 players earned at least one first-, second- or third-place vote.