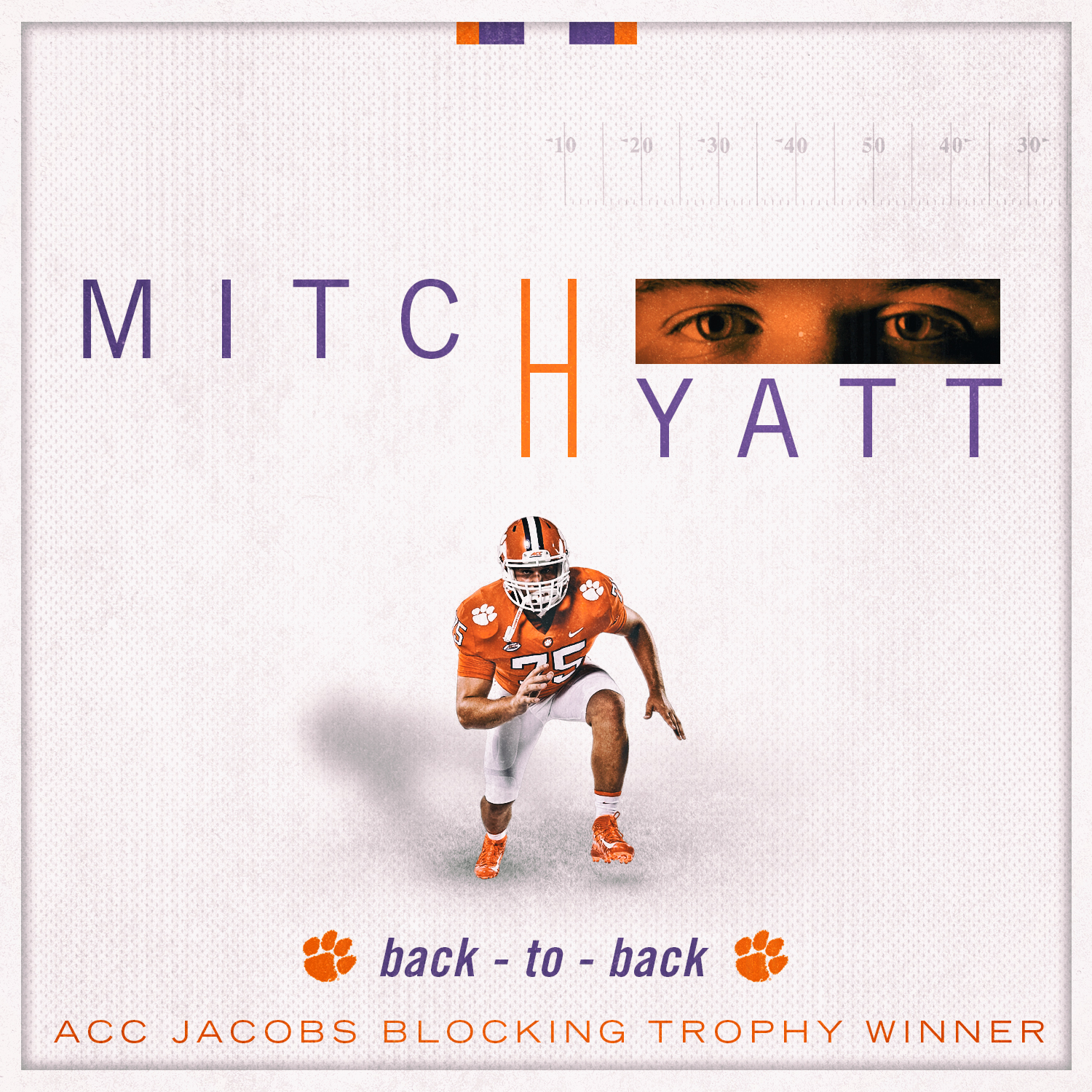 The Jacobs Blocking Trophy has been awarded annually since 1953 to the player selected the most outstanding blocker in the ACC by a poll of the league’s head coaches and defensive coordinators. Hyatt becomes 13th repeat recipient of the award in league history and the first Clemson player to be recognized multiple times. This marks the ninth time in league history that a Tiger has claimed the trophy.

The trophy is given in memory of William P. Jacobs, who served as president of Presbyterian College from 1935 to 1945. Hyatt will be recognized next weekend during activities surrounding the 2018 Dr Pepper ACC Football Championship Game, which is set for next Saturday evening at 8 p.m. at Charlotte’s Bank of America Stadium. Hyatt and his Clemson teammates will face Pitt for the conference crown.

Hyatt, a 6-foot-5, 305-pound native of Suwanee, Georgia, is a four-year starter for the Tigers and has played more snaps from scrimmage than any player in program history. A third-team All-ACC selection as a freshman three years ago and a first-team honoree each of the previous two seasons, Hyatt won the Jacobs Blocking Trophy this year for his role in a Clemson offense leads the ACC and ranks among the nation’s top 10 in scoring (45.7 ppg) and total yards per game (539.1).

“I’m really proud of Mitch and really happy for him” Clemson head coach Dabo Swinney said. “First of all, he came here with a lot of goals in mind. He came here to make Clemson better, and he’s done that. He’s leaving here being a part of four ACC Championship Games. He’s a three-time champion, hopefully a four-time champion.”

“Last year (Hyatt) was the first Jacobs Trophy winner at Clemson in a long, long time, and now, he’s the first player in school history to win it in back-to-back years,” Swinney noted. “I’m just really proud of him, and again, he’s so deserving. He is the model of consistency, and I know that his peers in this league, the other coaches in this league, recognize him as such. This award exemplifies that.”