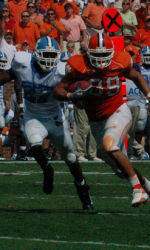 Clemson, SC – Clemson tight end Thomas Hunter and fullback Alex Pearson have been named to the 2006 All-ACC Academic team. Candidates for the team must have a career GPA of at least 3.0 and earn at least a 3.0 in the fall semester.

Both players are coached by Clemson assistant coach Billy Napier. Hunter was named to the President’s List (4.0) for the fall semester and graduated in December with a degree in biological sciences. Pearson, a sophomore athletically, but a junior academically majoring in marketing, made the Dean’s List for the fall semester.

On the field, Hunter had 16 receptions for 305 yards. The native of Marion, SC who attended the Pee Dee Academy, started 11 of the 13 games, missing two contests due to injury, including the Music City Bowl game against Kentucky. His 19.1 yards per reception average was the best on the Clemson team and his 305 receiving yards were the most by a Clemson tight end since 1975 when All-American Bennie Cunningham had 312.

Pearson, a native of Greenville and a graduate of Greenville High School, played in all 13 games, two as a starter in 2006. He had four pass receptions for 27 yards and scored two touchdowns, scoring receptions against Louisiana Tech and Temple. His blocking skills were a big reason Clemson ranked fifth in the nation in rushing offense in 2006.