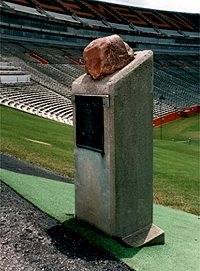 With construction beginning on the east endzone of Memorial Stadium, Clemson athletic officials were forced to move Howard’s Rock. Clemson football players touch the famous rock before Running Down the Hill on game days. It is believed that this is the first time the rock has been moved since being placed at the top of the hill in 1966.

The 20-pound rock is now being housed in the Clemson IPTAY-Ticket Office Complex. It will return to the hill once construction has been completed.

History of Howard’s Rock When the Clemson team gathers to Run Down the Hill the players rub Howard’s Rock because of the mystical powers it is supposed to give Clemson players.